Facebook Twitter Copy URL
Copied
From Rodrigo Duterte's quiet companion on the campaign trail to his stunning red carpet partner during his presidency, Honeylet Avanceña has come a long way, First Lady or not

MANILA, Philippines – A radiant Honeylet Avanceña looks over the emerald butterfly sleeves of her terno to flash a hundred-watt smile captured by cameras.

Beside her is Brunei Sultan Hassanal Bolkiah, the second head of state for whom her partner, President Rodrigo Duterte, is hosting a state dinner.

The only woman at the presidential table, Avanceña is a bonafide head-turner. As she looks serenely around the rest of the hall from her perch, she appears like a woman comfortable in her own skin, and her new public role.

Avanceña has come a long way since February 3, 2016, the day she accompanied Duterte for the first time in a campaign sortie when he was still a candidate and the presidency only a distant hope.

That hot day at the University of the Philippines Diliman campus, some of the journalists covering the event (a meet-up with militant farmer groups) did not even know Avanceña was Duterte’s common-law wife.

Clad in a yellow and black printed dress and wearing make-up that had melted from the afternoon heat, Avanceña was at first shy to talk to media. But a few questions in, she had warmed up to the interview and began answering them with the finesse the current Presidential Communications Operations Office might learn a thing or two from.

Today, Avanceña is no stranger to the public eye. She only recently began to embrace her role as Duterte’s “long-time partner,” gracing state dinners, hosting visiting First Ladies, and accompanying the President to official foreign trips.

Honeylet, whose real name is Cieleto, was a quiet and calming presence for Duterte back in the 2016 campaign season.

In sorties she would attend, clad in practical shirt and pants, she occasionally spoke to media but never gave speeches on stage to promote her candidate-husband. The most she would do was to throw out campaign shirts and Duterte-Cayetano ballers during a motorcade. She sometimes brought along with her their pre-teen daughter Veronica or “Kitty”.

Fast forward to the break of dawn on May 10, hours after election day, when her husband’s victory was sealed by 16 million votes, an exhausted but happy Avanceña was to be found backstage at Pastor Apollo Quiboloy’s television studio in Davao City where her husband was being interviewed.

Her make-up worn out by the frenzy of activities and an impatient Kitty tugging at her arm, Avanceña was now concerning herself with the kind of barong her picky husband would agree to wear during his presidency.

A month later, Avanceña sat down with Rappler to talk about changes in her life she would expect with a president for a partner. She had obviously recuperated from the intense campaign. Her hair sported light brown highlights.

That night, Avanceña said she was determined for two things to remain unchanged: she would have a life separate from her husband’s presidency and she would stay low-key and behind the scenes.

Avanceña has enough of her own life to attend to, without her husband’s presidency. The former high school valedictorian is an accomplished businesswoman who supplies meat to Davao City malls and owns 11 Mister Donut franchises.

True enough, Avanceña was content to stay under the radar during major events like Duterte’s oath-taking and his first State of the Nation Address. While she attended, she didn’t walk beside Duterte on the red carpet.

During the oath-taking ceremony, the place beside the new president, usually reserved for First Ladies, was taken by his 4 children.

The move was seen as a way to skirt the delicate issue of Duterte’s annulment with his wife Elizabeth Zimmerman and his not being married to Avanceña.

But in the last few months of Duterte’s presidency, the country watched as Avanceña gradually took on a more public role. In January, Avanceña had a starring role in the first-ever state dinner hosted by Duterte, the dinner for Japanese Prime Minister Shinzo Abe. A vision in white and gold, Avanceña sat beside Abe while Japanese First Lady Akie Abe sat beside Duterte.

When the Abes went to Davao City the day after, Avanceña was Mrs Abe’s host, bringing her to Japanese monuments and landmarks there.

Grace on the red carpet

But it was in April when she took on her most public role yet – as Duterte’s partner in welcoming heads of state to the 30th Association of Southeast Asian Nations (ASEAN) Summit held at the Philippine International Convention Center.

It was Avanceña’s most high-profile international event to date.

She appeared graceful yet modest beside Duterte on the red carpet, wearing an understated black lace dress under a green blazer. There was a touching moment, minutes before the ASEAN leaders began walking in, when Duterte asked Avanceña to feel his hand. It looked like the President was getting last-minute assurance from his partner that he would get through the day just fine.

As the leaders and their First Ladies approached, Avanceña was ready with a warm smile and pleasantries. She cut a fine figure, offering a woman’s soft touch beside a President known for his macho brashness.

The month of May brought another first for Avanceña. She and Kitty went on their first presidential trip to Cambodia, Hong Kong, and China. She looked every inch a First Lady as she and Duterte stepped out of the plane and onto the red carpet rolled out for them by the Cambodian government. 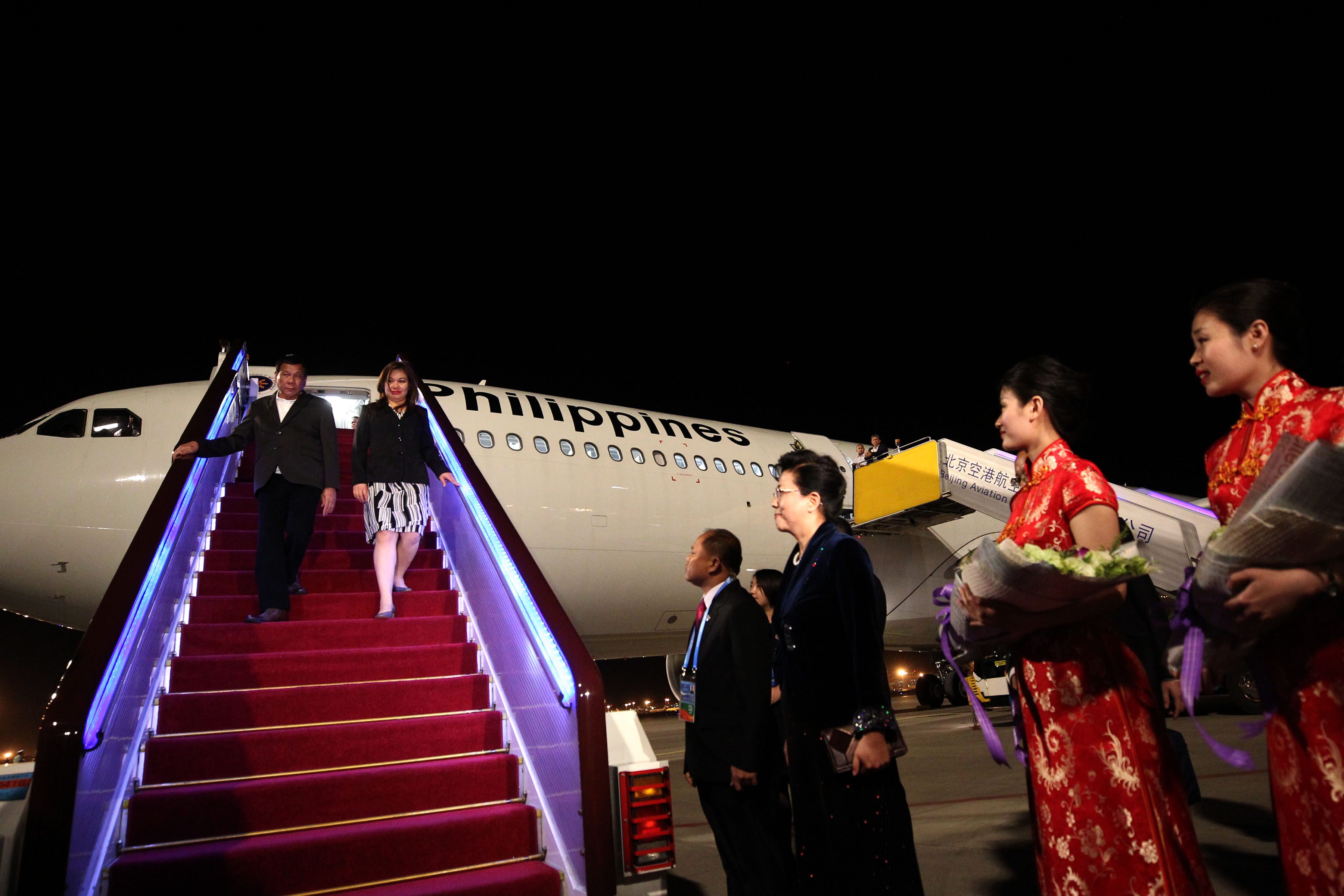 Wearing a blue and green printed dress and sensible grey heels, Avanceña accepted with open arms the orange flowers offered to her as a welcome gift. That same trip, she and Kitty visited a hospital and several tourist attractions in Phnom Penh, care of their host, the Cambodian government.

‘There is no job description for a first lady.’

Days later, Avanceña would meet even more world leaders at the Belt and Road Forum in Beijing, where she attended the welcome dinner with Duterte and the spouses’ program. She and Kitty would again fly with Duterte to Moscow, Russia, later that month.

Avanceña has been taking on so many tasks usually given to first ladies that even Palace photographers and captioners mistakenly called her “First Lady” in a photo release. Within hours, the Palace sent an email correcting the caption, replacing the title with “longtime partner.”

Life of a first lady

For former first lady Amelita “Ming” Ramos, having a first lady by his side could be of great help to President Duterte.

“It would help because our people still listen to women and it will help if she could do more, if she were first lady,” Ramos told Rappler, referring to Avanceña. Mrs Ramos, wife of former president Fidel Ramos, was known as a “low-key” first lady who loved sports, particularly badminton, and involved herself in several advocacies, including the rehabilitation of Pasig River and promotion of indigenous arts.

Duterte has often expressed admiration for Ramos’ husband, one of the influential voices who convinced him to run for president.

For Mrs Ramos, Duterte should marry Avanceña, who has been with him “for so long.”

“Well, he should marry already this girl he’s been with for how many years, but that’s all up to him,” she said.

Having a first lady helps presidents by making them appear “stable” in their personal lives, said Ramos.

But title or no title, there are many ways Avanceña can help Duterte, especially when adding some feminine sensibleness to his famous uncouthness.

“You can tell your husband, that tie doesn’t look good. Jeans, you shouldn’t wear that,” said Mrs Ramos.

Helping in these small details has been part of her experience as first lady. She recalled President Ramos’ visit to Brunei where they were told by protocol staff that it’s considered bad manners there to cross legs.

“So I had to remind my husband, don’t cross your leg ha,” shared Ramos. Could Avanceña, for instance, influence Duterte to stop chewing gum in front of foreign dignitaries, as he did in the presence of Chinese President Xi Jinping during his October state visit? (READ: Duterte told of protocol: ‘You do it for the country’)

Being first lady is no walk in the park, though there is glamor when you are married to the most powerful man in the country, as Imelda Marcos so spectacularly showed.

Making the position even trickier is that there are no rules to being first lady.

“There is no job description for a first lady… There’s nothing written. You have to decide yourself,” said Mrs Ramos.

Nothing in the Constitution or other laws of the land specify the role of the “First Spouse” or their tasks. As such, no budget is set aside for them.

Mrs Ramos would hold fund-raisers for her advocacies. She also kept her job in an international school to pay for the outfits she wore to formal events.

And as with every public role, there will be criticisms.

One day, she got a letter from someone criticizing her for the way she walked.

“I get a letter telling me I should improve the way I walk, I walk like a duck. So that’s the way I am, so that’s it,” said Mrs Ramos. She became so conscious of what other people might think that she thought twice about wearing a set of ruby jewelry given to her by the sultan of Qatar.

She wore the set of necklace, earrings, bracelet, and ring only once.

“I felt so conscious because I was thinking, ‘Wow, people will say, before, she did not wear that. How come she has that now?’ It was only one time I wore that and never again,” said Mrs Ramos.

But public attention on her personal life with FVR became even more pronounced with the increasing influence on him by his mistress Rose Marie “Baby” Arenas.

Today, Mrs Ramos waves off the affair, but seems uncomfortable with the topic. Asked how she dealt with Arenas then, she said, “Nothing. I’m still the first lady unless I divorce my husband.”

Compared to Fidel Ramos, Duterte is much more open about his being a womanizer and a flirt.

In the presidential campaign, he admitted he had at least two girlfriends, though he was already living with Avanceña and their daughter.

Avanceña, when asked to comment about this, was cool as a cat as she smiled and said, “That was before. He’s 70 already.”

But Avanceña herself had once been the “other woman.” Duterte courted her while he was still married to Elizabeth Zimmerman, mother of his 3 older children. The job of first lady is a position of power, since, as the President’s spouse, first ladies can influence the chief executive in a way no other person can.

Mrs Ramos agrees with this. Other people recognized the power she had. One time, a Chinese tycoon supposedly visited their home on Arlegui Street, just outside Malacañang Palace, to meet with her.

She never knew what the businessman wanted because as soon as the former president saw him, he shouted, “Don’t deal with my wife!”

Avanceña, whether first lady or not, already wields that power since it is she whom Duterte comes home to every week.

Sources say Avanceña’s urging has led to certain appointments in government, including the appointment of an ambassador.

Title or no title, she already gets to hobnob with heads of state and their influential spouses.

Five more years remain in the Duterte presidency. With Honeylet’s transformation in this first year alone, who knows what heights she’ll reach in the days to come? – Rappler.com