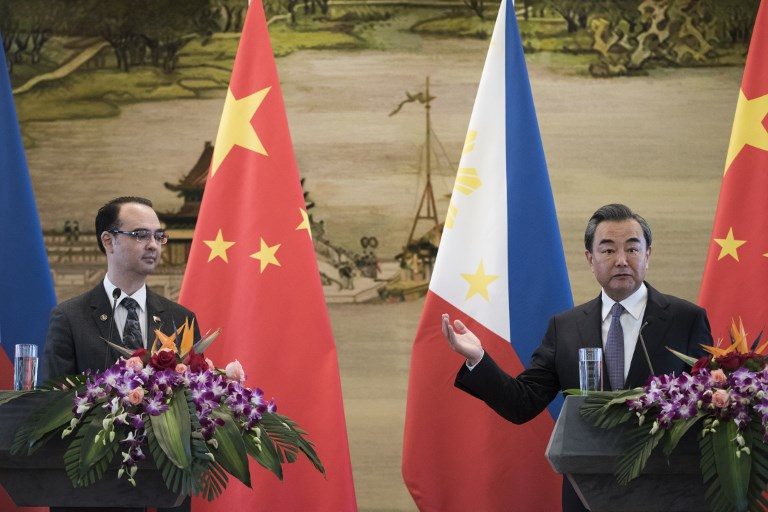 Facebook Twitter Copy URL
Copied
Chinese Foreign Minister Wang Yi says, 'In the future, in keeping with the Philippines' needs, we will continue to provide necessary assistance and help'

BEIJING, China – China vowed Thursday, June 29, to continue providing the Philippines with “necessary assistance,” a day after Beijing donated thousands of weapons to the country to help its fight against terrorists.

Foreign Minister Wang Yi made the remarks during a visit by his Philippine counterpart Alan Peter Cayetano and pledged China’s help with reconstruction efforts in the war-torn southern city of Marawi.

“Yesterday the first batch of emergency assistance was delivered to the Philippines,” Wang told a joint news conference in Beijing.

“In the future, in keeping with the Philippines’ needs, we will continue to provide necessary assistance and help.”

The small shipment of assault and sniper rifles and ammunition is the first example of Chinese military aid since Philippine President Rodrigo Duterte threatened to move away from Manila’s traditional ally America and seek Beijing’s support.

The weapons shipment, worth some 50 million yuan ($7.35 million) “highlights the dawn of a new era in Philippine-Chinese relations,” Duterte said.

The US embassy said earlier this month that special forces were also assisting the Philippine military, although Duterte has said recently he had no knowledge about US technical assistance to the troops fighting in Marawi. (READ: Duterte on U.S. aid in Marawi: ‘Nagpapasalamat na rin ako’)

China’s foreign ministry on Thursday confirmed the Chinese defense ministry had delivered a “batch of counterterrorism material” at the request of the Philippine government but did not elaborate on its contents.

The Philippines, which has a mutual defense treaty with the United States, has long relied on US-supplied arms.

But in a swipe at America – which has criticized his flagship war on drugs – Duterte has said he will seek more weapons from China and Russia. (READ: PH, Russia sign defense agreement, 9 other deals)

Chinese Ambassador Zhao Jianhua, who formally handed over the weapons on Wednesday, June 28, said a “second batch” would soon be delivered.

“The donation is not big but it is big in the sense that it marks a new era in relations between our two militaries,” Zhao said.

Philippine troops, backed by air strikes and artillery, have battled for over a month to drive the extremists out of Marawi but the terrorists have fought back.

Wang said China would work with the Philippines to remove the “threat of illegal drugs and the breeding ground of terrorism.” – Rappler.com