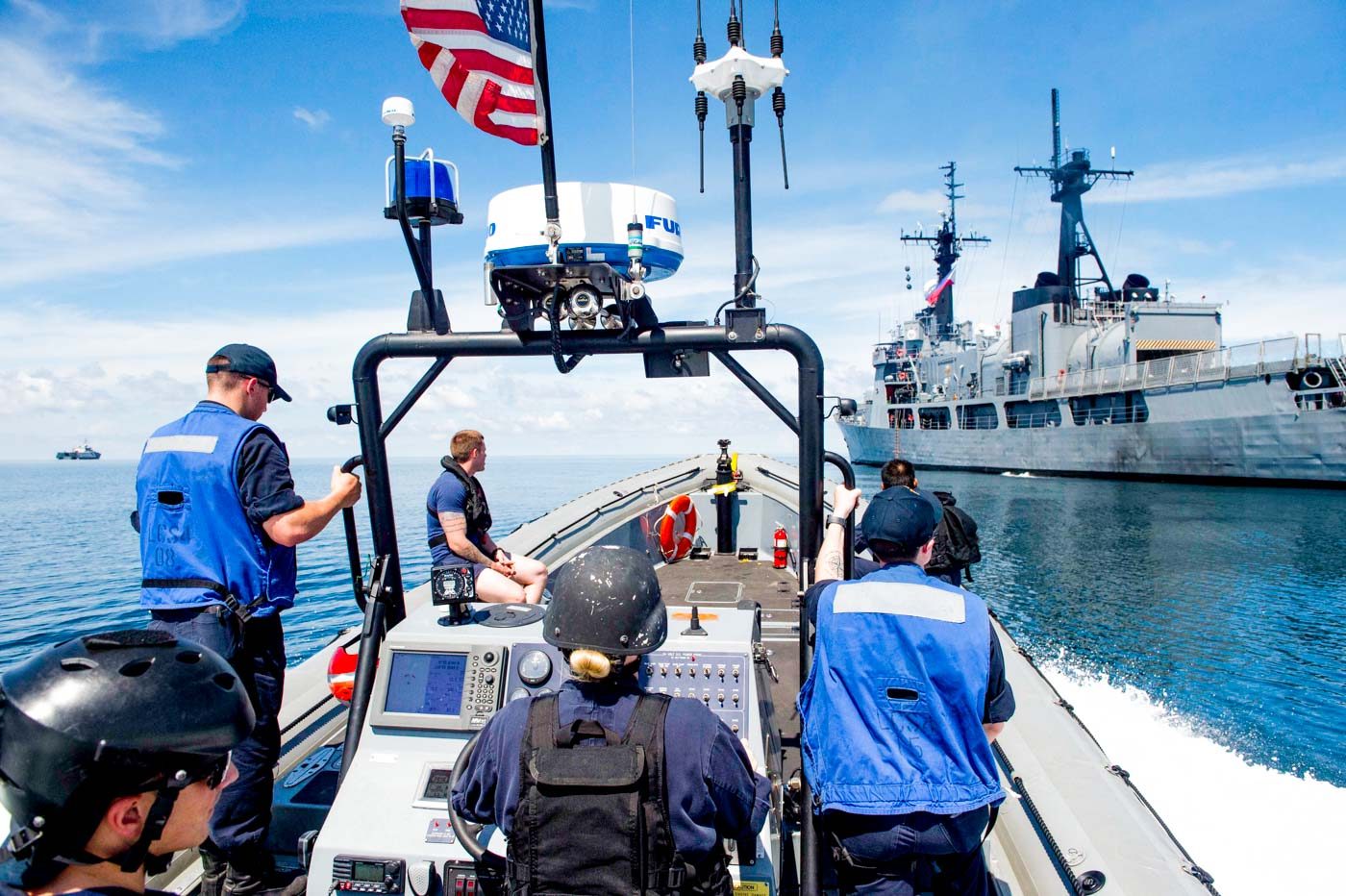 Facebook Twitter Copy URL
Copied
The joint patrol is upon the invitation of the Philippine government, and comes amid the clashes between government troops and local terrorists in Marawi City

MANILA, Philippines – The Philippine and United States navies completed a coordinated patrol in the Sulu Sea on Saturday, July 1, according to the US embassy in Manila.

In a statement on Saturday, the US embassy said crews from the Littoral Combat Ship USS Coronado (LCS 4) and the Del Pilar Class Frigate BRP Ramon Alcaraz (PF 16) worked closely together “to detect and deter threats to maritime security.”

The patrol was completed upon the invitation of the Philippine government, and comes amid the clashes between government troops and local terrorists in Marawi City.

He added, “Our at-sea operations with the Philippine Navy demonstrate our commitment to the alliance and deter piracy and illegal activities.” During the operation, a group of Philippine Navy sailors went on board the USS Coronado to “coordinate communications and movements between the two ships,” the US embassy said.

The Philippine Navy sailors also exchanged best practices with their US counterparts “in visit, board, search, and seizure (VBSS) techniques, and information sharing.”

The US embassy said the patrol strengthened maritime security cooperation between the navies of the two countries. It also enhanced their ability to respond to piracy and transnational criminal activity at sea.

“It further demonstrates US commitment to the security of the Philippines and enduring US interest in promoting stability and prosperity in the Indo-Asia-Pacific region,” the US embassy said.

Just recently, the USS Coronado also completed the Maritime Training Activity Sama Sama with the Philippine Navy in the vicinity of Cebu.

“The US and the Philippines continue to work together on a number of initiatives and conduct regular military exchanges through routine participation in bilateral and multilateral exercises,” the embassy said.

The Philippines is only one of the US’ two treaty allies in Southeast Asia. Continued strong ties between the long-standing allies have been tested under the administration of President Rodrigo Duterte, who has forged an “independent foreign policy” that seeks to move the Philippines away from the US and closer to China and Russia. (READ: Duterte foreign policy: Independent but isolated)

In his first few months in office, Duterte announced that he wanted to stop the country’s military exercises with the US, as he does not want to antagonize China, but later changed his tune.

Aside from a Mutual Defense Treaty, the two countries also have an Enhanced Defense Cooperation Agreement (EDCA), an executive agreement that gives US troops, planes and ships increased rotational presence in Philippine military bases, and allows Washington to build facilities to store fuel and equipment there. – Rappler.com