Facebook Twitter Copy URL
Copied
Defense Secretary Delfin Lorenzana is confident the Supreme Court will uphold martial law when it rules on petitions to nullify the declaration on Tuesday, July 4

MANILA, Philippines – The declaration of martial law is not only meant to address local terrorist groups in Mindanao. It also aims to crush communist insurgency, illegal drug syndicates, and peace spoilers.

These are among 12 “key tasks” the military must perform under martial law. They are listed in the AFP Operational Directive Number 2 2017 or the “AFP’s Implementation of Martial Law in Mindanao.”

President Rodrigo Duterte declared martial law after combined forces of the Maute Group and the Abu Sayyaf Group attacked Marawi City on May 23. On top of the military’s operational directive implementing martial law are to “destroy the local terrorist groups (LTGs)” and to “clear LTG-affected areas,” the focus of military operations in Marawi City.

The list of key tasks also includes instructions to “degrade the armed capabilities of NPA,” referring to the communist armed group New People’s Army. It is the 3rd in the list.

They are also to “dismantle other terror-linked Private Armed Groups, illegal drug syndicates, peace spoilers, and other lawless armed groups.” They are 6th on the list. (See the complete list of key tasks below the article.)

The operational directive was crafted upon the orders of Armed Forces chief General Eduardo Año, the implementor of martial law. The document was detailed in a powerpoint presentation the military prepared for the Supreme Court.

What is not clear in the military documents is if the military has used its martial law powers against the NPA. But it did launch anti-narcotics operations, based on the submissions.

On Tuesday, July 4, the Supreme Court is expected to rule on petitions seeking to nullify the declaration of martial law in Mindanao. Defense Secretary Delfin Lorenzana said he is confident that the court will uphold martial law.

Not discussed in oral arguments

The oral arguments, recording of which were accessible to the public, focused on 3 issues:

The discussions in the court did not go to or at least did not highlight the inclusion of the NPA and illegal drug syndicates as enemies to be targetted in the implementation of martial law.

Petitioner Neri Colmenares did raise questions about the inclusion of NPA activities among the government’s justificiations, but only to the media.

In the documents, the military said it expected  atrocities to erupt in various parts of Mindanao, and the NPA is among the threat groups it identified, joining the list of ISIS-linked organizations.

A document summarizing a military briefing given to Solicitor General Jose Calida on the situation in Marawi and the progress of the implementation of martial law reads:

It is expected that the order of the national operation comand of the CPP-NPA-NDF for tactical offensives shall again result to violent atrocities such as the burning of government infrastructure and economic facitilies, raid and harassment of government forces particularly isolated CAA detachments and police stations and the collection of revolutionary taxations including the abduction of off duty government personnel and civilians.

The military also noted a supposed May 24 order issued by communist leaders for the “intensification of the NPA tactical offensive all over the Philippines, especially in Mindanao.”

This declaration was cited by the government on May 27 when it cancelled the 5th round of peace talks with the Left in the Netherlands.

Duterte last year resumed peace talks with communist rebels. Representatives of the government and the National Democratic Front (NDF) – which represents the rebels in the negotiating table – were already in the Netherlands when Marawi clashes began on May 23.

Negotiators have not given up on the talks. Backchannel talks are discussing how to move the talks forward.

The Western Mindanao Command (Westmincom), which covers Marawi City and most areas of ISIS-linked groups, did not report anti-narcotics operations.

At least one of the high-profile ISIS-linked group operates within the area of Eastmincom – the Ansar Khalifa Philippines (AKP).

The NPA generally operates within the area of Eastmincom. 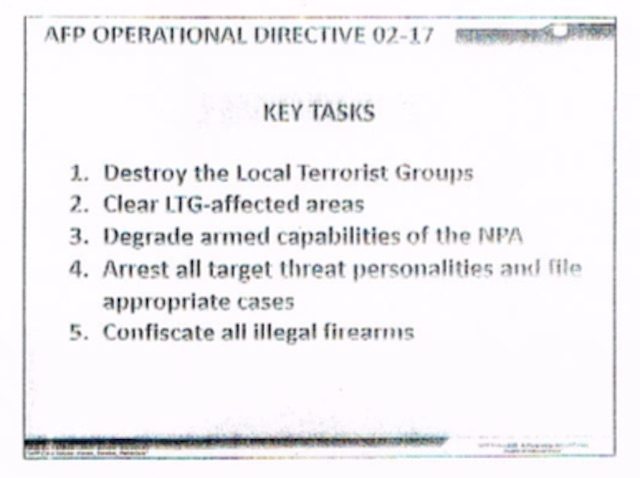