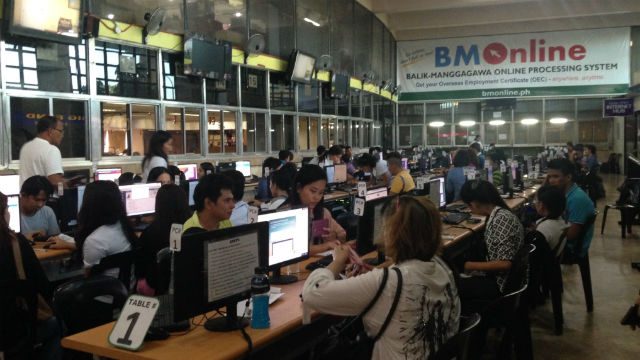 MANILA, Philippines – Department of Labor and Employment (DOLE) Secretary Silvestre Bello III said they will soon be issuing overseas Filipino workers an identification card to do away with the issuance of an overseas employment certificate (OEC).

In a briefing in Malacañang on Tuesday, July 4, Bello said that the OFW ID, which will be called IDOLE (ID of the DOLE) will be given to “all bona fide OFWs at no cost”.

“This will serve as your OEC…so they don’t have to go to the POEA (Philippine Overseas Employment Administration) every time they go and come back. All they have to do is to show their ID,” Bello said.

OFWs have long complained about the difficulty of obtaining OECs whenever they need to go or return to work abroad since they have to hurdle long lines just to get one from the POEA.

The POEA, in August last year, has scrapped the OEC for returning OFWs and those hired through the agency’s in-house recruitment facility in response to President Rodrigo Duterte’s directive to streamline the process. (READ: How Duterte gov’t cared for OFWs in first 100 days)

Set to be launched on July 12, Bello described the IDOLE as a major initiative of the Duterte administration in addressing the needs of the OFWs.

“This is the best gift of our President to OFWs,” said the labor secretary.

Aside from providing the basic information and replacing the OEC, the ID will also serve as the migrant workers’ Social Security System (SSS), Pag-ibig Fund, and PhilHealth membership IDs.

Bello also said they are looking into adopting a system that would let IDOLE serve as the designated passport of OFWs.

“We are talking to the DFA (Department of Foreign Affairs) and the DOJ (Department of Justice) through its agency, the Bureau of Immigration, so that the IDOLE may be used as a passport,” he said.

Citing Finance Secretary Sonny Dominguez’s statement, Bello also said that the OFW bank will be launched in October this year. The OFW ID and bank are among Duterte’s promises to the migrant workers’ sector in the last elections. – Rappler.com