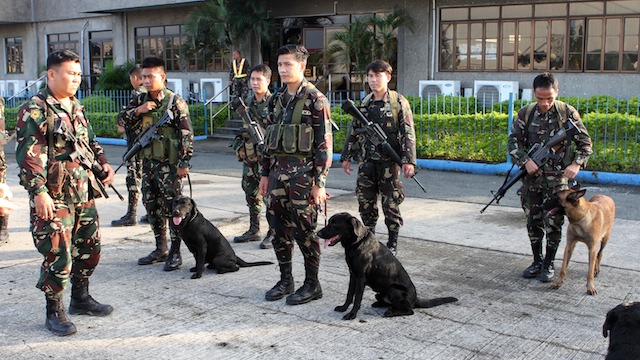 MANILA, Philippines – The President should have more bark and more bite.

That’s the recommendation of the Commission of Audit (COA) to the Presidential Security Group (PSG), an elite group of military and police personnel tasked to protect the highest leader of the land: President Rodrigo Duterte.

He’s supposed to have a minimum 25 K9 dogs to protect him, but for the past 6 months, the PSG has been using only 20 dogs for full bomb sweeps and detection during the President’s official functions.

By December 2016, as many as 11 military dogs had already retired from the PSG’s dog squad. Five more dogs are scheduled to retire in 2018 due to advanced age.

“With the 11 retired military dogs and 5 more expected to retire in CY [calendar year] 2018, the prime duty of the PSG in securing the safety of the President may not be effectively carried out,” COA said in its value for money and performance audit on the General Headquarters-Armed Forces of the Philippines (GHQ-AFP) released Saturday, July 1.

The PSG, according to auditors, should have anticipated this problem, given that there were records of the dogs’ ages.

“The Command did not procure any bomb dog for the last 12 years and almost all of the existing effective bomb dogs were acquired through donation,” COA said.

Auditors also lamented that even if the PSG got dogs immediately, it would still take time until a K9 unit can be used for operations.

“The acquisition and training of K9s necessitate a tedious process before they are utilized for military operations. Hence, a reasonable inventory of military dogs should be maintained and that acquisition of such should be properly planned and completed in a timely manner to support the Command’s operation critical to bomb detection,” COA added.

COA recommended that the PSG-Special Reaction Unit (PSG-SRU) start a system that will anticipate the need for additional work-ready K9s should the need arise.

It also recommended that the PSG ensure that an allocation for the procurement of working dogs be included in the 2018 budget.

The PSG reacted to COA’s findings, explaining that it, in fact, requested for additional allocation under the 2017 budget to acquire 11 working dogs, but the proposal “was not considered by the Higher Headquarters.”

“Accordingly, the agency will submit a separate request to Higher Headquarters citing the urgency, importance, and detrimental effect it will have on the protective security operation for the President and other Very Very Important Persons,” the PSG said.

For now, the PSG-SRU has borrowed 4 dogs from the AFP (“Kara,” a German Shepherd, and “Brandon,” a Labrador) and the Philippine Army K9 Units (“King” and “Jerry,” both Belgian Malinois).

The PSG is also looking to review its own rules that say dogs may be retired after 8 years of maximum service, after which a public auction must be held for them within 3 months upon leaving the service – or as otherwise directed by the Major Kennel Management Committee.

Beyond that, they said, the dogs already show declining abilities in bomb detection. – Rappler.com