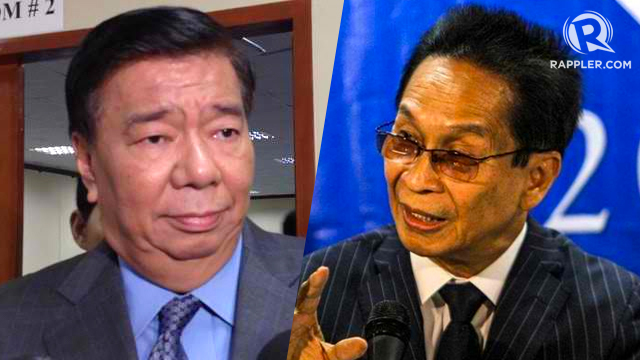 MANILA, Philippines – Only Congress has the power to extend martial law.

“The Constitution is clear that it is Congress that has the power to extend martial law and the President may only recommend,” Drilon said in a statement on Thursday, July 6.

Drilon said Panelo’s advice is “an affront to the Constitution.”

“Such action will be a circumvention of the Constitution because for all intents and purposes, it is nothing more but an extension of the existing proclamation,” Drilon said.

“You cannot circumvent the Constitution. Huwag naman sana nating lokohin ang taumbayan (Let us not fool the people). Let us not try to go around with the constitutional requirements. Let us respect the process,” he added.

The senator said Panelo’s advice “would violate the principle of checks and balances between the executive and Congress.”

The executive, he added, should respect the constitutional duty of Congress to review and approve or disapprove any extension of martial law.

Duterte earlier declared martial law in Mindanao, after clashes between government troops and the Maute Group erupted in Marawi City on May 23.

To prove his point, Drilon cited Section 18, Article VII of the 1987 Constitution, which states, “[U]pon the initiative of the President, the Congress may, in the same manner, extend such proclamation or suspension for a period to be determined by the Congress, if the invasion or rebellion shall persist and public safety requires it.”

Drilon said the provision is meant to prevent a repeat of the abuses committed during martial law under dictator Ferdinand Marcos.

“[It is meant] to provide a safeguard in the president’s exercise of [his] martial law powers,” the senator said.

Drilon earlier slammed Panelo for claiming that Duterte can declare martial law on the basis of the worsening problem of illegal drugs in the country. (READ: Drilon hits Panelo on martial law: Review some more)

Senator Francis Escudero, for his part, cautioned Panelo on his martial law remarks.

“If it’s for the same area and to address the same threat, it is, for all intents and purposes, an extension and not a re-declaration,” Escudero said in a text message to reporters on Wednesday.

“I hope the legal advisers of the President will exercise more prudence instead of advising him about ‘trailblazing legal theories’ that may raise more constitutional issues than settling them,” added Escudero, who is also a lawyer.

Earlier, Congress supported the proclamation and refused to convene to discuss Duterte’s declaration of martial law in Mindanao. The Supreme Court also upheld the constitutionality of the proclamation, prompting petitioners and critics to predict that Duterte would declare martial law nationwide. – Rappler.com