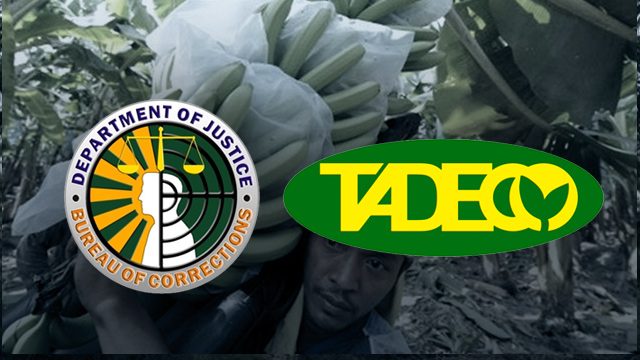 MANILA, Philipines – State auditors recommended the filing of graft charges against officials of the Department of Justice (DOJ) and the Bureau of Corrections (BuCor) who were involved in the latter’s joint venture agreement (JVA) with the Tagum Agricultural Development Company Incorporated (Tadeco).

This was the recommendation of the Commission on Audit (COA) in its 2016 audit report on BuCor released last Saturday, July 1. The audit team was headed by Josefina Gonzales, with Flordeliza Ares as supervising auditor.

“Public officials involved in the BuCor-Tadeco deal may be prosecuted under Section 3 (e) of RA (Republic Act) 3019 (Anti-Graft and Corrupt Practices Act). The act of the BuCor and DOJ officials in selecting Tadeco to use the reserved land without public auction amounts to giving any private party unwarranted benefits, advantage or preference in the discharge of his official administrative functions,” said the state auditors.

“We also recommended that [BuCor] management initiate the filing of criminal action before the Office of the Ombudsman for the patent violation of laws and the Constitutions (sic),” COA added.

This was renewed on May 21, 2003, with BuCor guaranteed an annual production share of P26,541,809, which would automatically increase by 10% every 5 years. The JVA also states that BuCor must receive profit shares with respect to the leased lands where bananas are planted.

But Speaker Pantaleon Alvarez raised several red flags in the JVA, claiming it “prejudices” the government by P106,167,191 annually.

He then initiated a House probe into the banana company owned by his longtime friend Davao del Norte 2nd District Representative Antonio Floirendo Jr before their parting of ways. (READ: Alvarez: Stick to facts, Tadeco probe not linked to personal grudge)

Still, the COA annual audit report said the DPPF is on non-alienable land and is therefore outside the commerce of man. This means the BuCor-Tadeco deal is “inexistent and void from the beginning.”

COA said the contract is also unconstitutional because it did not comply with the provision under the 1987 Constitution that only allows 1,000 hectares of public agricultural land to be leased to a private corporation.

Tadeco also made use of reserved government land without holding public auction.

The COA audit report supports previous findings by separate DOJ and COA panels tasked to review the BuCor-Tadeco deal, with both saying the JVA is illegal and must be cancelled. – Rappler.com