Labor union to wage board, employers: Try living on P357 a day 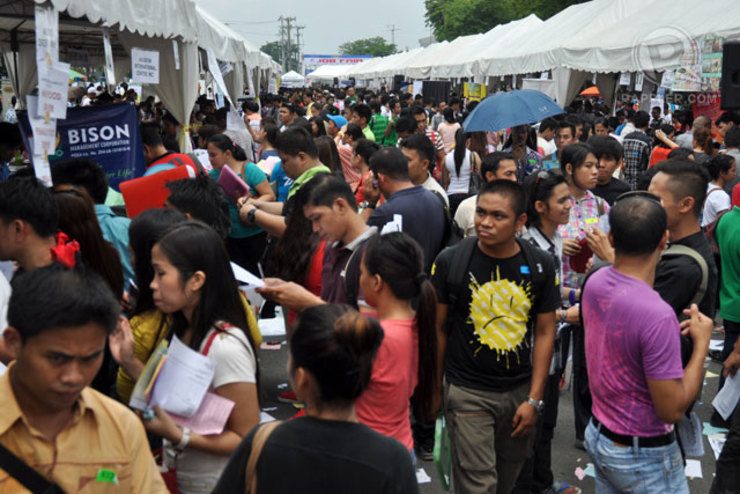 Facebook Twitter Copy URL
Copied
The P491 minimum wage in Metro Manila has a real value of only P357, based on National Wages and Productivity Commission data

MANILA, Philippines – Labor unions expressed their growing frustration to the wage-setting board as they again appealed for a minimum wage hike during a public consultation on Thursday, July 6.

Associated Labor Unions (ALU) spokesperson Alan Tanjusay even posed a challenge to members of the tripartite wage board of the National Capital Region (NCR), which is composed of representatives from the labor sector, employers, and the government.

In presenting ALU’s proposal, Tanjusay said they are just asking the tripartite wage board to restore the purchasing value of the P491 minimum wage. Data from the National Wages and Productivity Commission (NWPC) show it currently has a real value of P357.

(Imagine you’ll have to budget P357. I challenge the members of the wage board, try living on P357 a day.)

He stressed that this amount is not only for a single person but for a family of 5 people.

“How will this affect our workers? They’ll be forced to buy the cheapest food for their family. That means less nutritious food for you and your family,” he added in Filipino. (READ: Is the minimum wage enough for a day’s worth of nutritious meals?)

ALU is seeking a P184 across-the-board wage hike nationwide. Other groups such as the Trade Union Congress of the Philippines (TUCP) are asking for a P259 increase while the Association of Minimum Wage Earners and Advocates (AMWEA) wants the minimum wage to be raised to P1,200 in 4 tranches.

“This wage increase petition, it’s the only hope of the workers to augment their earnings,” said TUCP’s Raffy Mapalo.

While the wage board secretariat said the Philippines has the highest minimum wage among its Southeast Asian counterparts, Mapalo argued that this information should be assessed vis-à-vis the real needs of workers.

“Let us look beyond the wage but the prices of commodities in each country and the productivity of the Filipino workers,” he said.

All 3 groups lamented that previous increases have ranged from just P10 to P15.

Tanjusay said ALU filed its petition “in protest,” accusing the board of not being responsive to workers’ needs. He stressed their call to abolish the regional wage-setting scheme and establish a national board to set a uniform wage. (READ: Is it time for a national minimum wage?)

Board Chairperson Johnson Cañete said they will be taking note of the sentiments of the workers, but would still have to consult with other stakeholders before deciding. The board will have a consultation with employers on July 14 and another dialogue with the labor groups on July 27.

“We will also be looking into how much can be given,” Cañete told Rappler in an interview after the consultation. “The employers should be able to afford the petition of the workers. We should balance the interests.”

The board’s employer representative Vicente Leogardo Jr, who is also the director-general of the Employers Confederation of the Philippines (ECOP), said granting the wage hike would afftect micro, small, and medium enterprises the most, which comprise 91% of businesses in the country.

Meanwhile, for ECOP president Donald Dee, both employers and workers should think outside the box in resolving the wage issue.

Dee told Rappler that he has crafted a “social contract” with labor groups that would “increase the purchasing power of the peso.”

The contract includes a commitment to construct a dormitory for workers paid for by employers so they don’t have to spend on daily transportation. They will also be jointly asking the government to provide free Wi-Fi and equalize the power rates of factories inside and outside special economic zones.

While amenable to this agreement, ALU-TUCP is still banking on the approval of their proposal to provide a P500 subsidy to minimum wage earners.

Tanjusay said President Rodrigo Duterte has agreed to this scheme. The workers have already submitted a proposal to the Department of Budget and Management on how this can be operationalized. – Rappler.com