Panelo: No constitutional limit to number of martial law declarations

Jul 6, 2017 6:00 PM PHT
Pia Ranada
Facebook Twitter Copy URL
Copied
'If the President lifts martial law one week prior to the expiration, and then suddenly there is another rebellion, are you saying he cannot declare martial law again? He can,' says Chief Presidential Counsel Salvador Panelo in response to the criticism of Senate Minority Leader Franklin Drilon 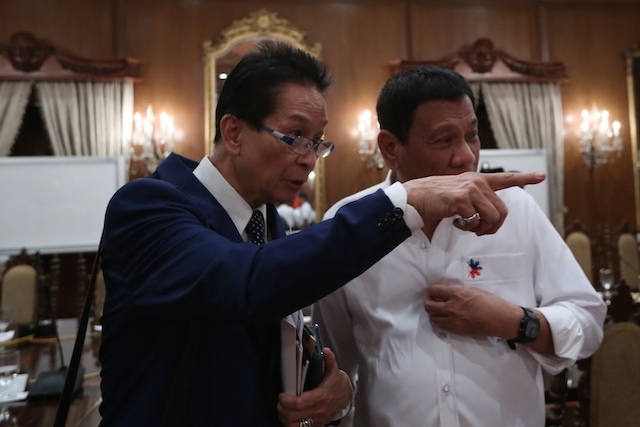 MANILA, Philippines – The 1987 Constitution does not set a limit to the number of times President Rodrigo Duterte can declare martial law, Chief Presidential Counsel Salvador Panelo said on Thursday, July 6.

Panelo made the statement after Senate Minority Leader Franklin Drilon called him out for saying that the Chief Executive can issue another martial law declaration if Congress rejects a request to extend martial law in Mindanao.

“I don’t think there is a provision in the Constitution that you can only declare martial law once. Otherwise, you will be tying the President’s hands in quelling a rebellion,” Panelo said in a media interview on Thursday.

Panelo also clarified that he had said Duterte “theoretically” will need to make a new declaration if the 60-day period of his current declaration expires with no extension granted by Congress.

His earlier text to reporters read: “If Congress does not extend on the 60th day upon initiative of the President, then there can be no extension. Another proclamation is necessary.”

The Constitution limits the duration of martial law to 60 days, which can be extended if Congress approves, by a joint vote, a request from the President.

Drilon said Panelo’s suggestion was tantamount to a “circumvention” of the Constitution which states Duterte needs Congress approval before there can be a martial law extension.

Drilon, a former justice secretary, said while it would be technically a “new” proclamation,” if the basis for it is the same as the proclamation which had lapsed, then “for all intents and purposes, it is nothing more but an extension of the existing proclamation.”

Panelo countered that the Constitution does not give a limit to the number of times the President can declare martial law within a given period.

“For example, if the President lifts martial law one week prior to the expiration, and then suddenly there is another rebellion, are you saying he cannot declare martial law again? He can,” he said.

He reasoned that the 1987 Constitution recognizes the need to give the President enough powers to quell rebellion or invasion when it compromises public safety.

The Charter also saw to it that there are safeguards to check this power.

“That is his constitutional duty. Because I do not think that the framers of the Constitution intended the President to be tied to one particular declaration of martial law. There are many safeguards. The Congress is there to review,” Panelo said.

Duterte’s martial law proclamation, and the Marawi siege that triggered it, marked their 45th day on Thursday, July 6. Proclamation 216 is set to expire by July 22, days before he delivers his second State of the Nation Address.

The Supreme Court upheld Duterte’s martial law proclamation, though 3 justices – Chief Justice Maria Lourdes Sereno, Senior Associate Justice Antonio Carpio, and Associate Justice Benjamin Caguioa – said it should not cover the entire Mindanao. In their opinions, Sereno and Carpio said Duterte must be watched closely as he exercised his power to implement Proclamation 216.

Associate Justice Marvic Leonen wanted to nullify the proclamation, saying the Marawi crisis is not a rebellion. – Rappler.com