Local lawmakers want to cut up Palawan into 3 provinces 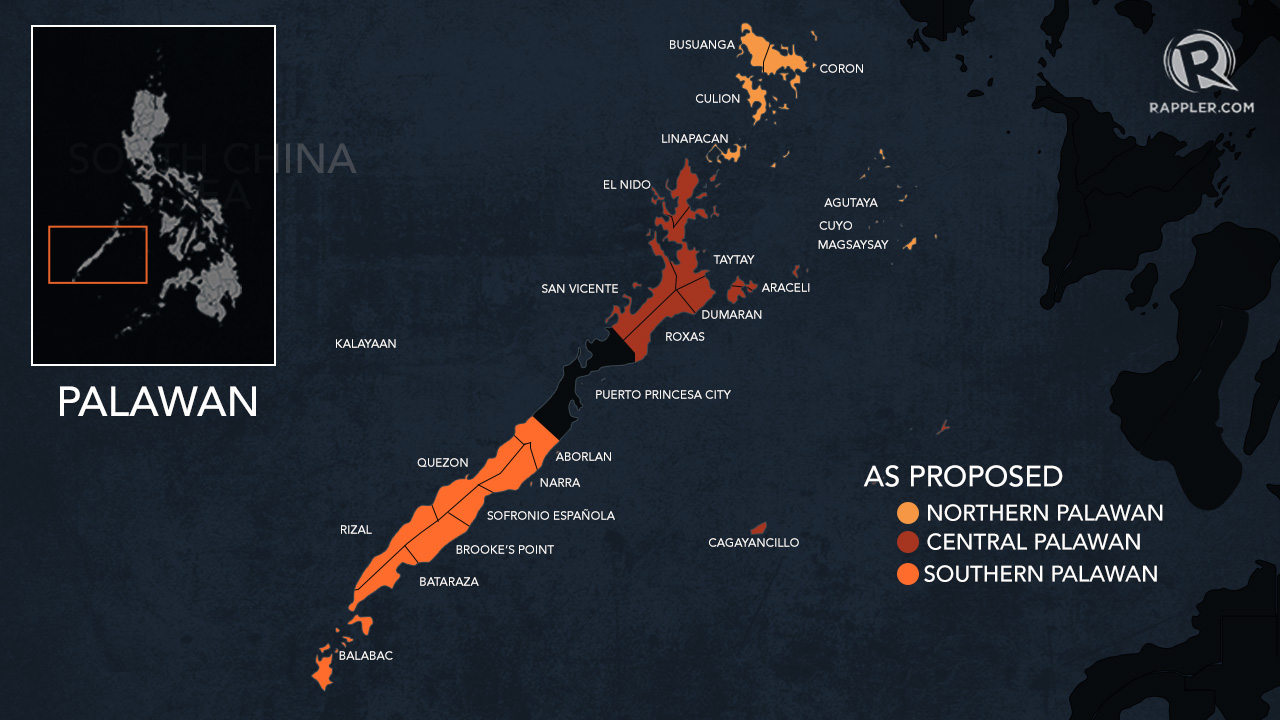 PALAWAN, Philippines (UPDATED) – Is it time to divide Palawan into 3 provinces?

This has become a big thing in the province in the past few days as the provincial board began deliberating on it with the end goal of maximizing the delivery of basic services to Palaweños.

In a regular session last Tuesday, July 4, 1st District board member David Francis Ponce de Leon brought up the proposal through a resolution, which has gained support from the majority of the legislative body.

Ponce de Leon’s resolution suggests the creation of Southern, Central, and Northern Palawan provinces, which would all pass the required population of 250,000, an annual income of P20 million, and a land area of 2,000 square kilometers, as provided under Republic Act 7160 or the Local Government Code of 1991.

The resolution was originally proposed in 2007 by the author’s father, former vice governor David Ponce de Leon, but it did not prosper in Congress.

The proposed 3 provinces of Palawan will be:

By creating new provinces, old-timer and newbie politicians can vie for additional government seats: 3 governors and vice governors, as well as 30 more provincial board members. And to some extent, it would also mean creation of additional congressional districts.

A province of 771,667 inhabitants (excluding Puerto Princesa) and a land area of around 1.5 million hectares, Palawan is the country’s largest province that falls under the Mimaropa region.

The move would also pave the way for the establishment of regional government offices in the province, according to the committee on local government chair.

Currently, he added, most of those regional centers are located in Calapan City, hence entailing big costs for Palaweños when doing transactions.

Road to becoming a federal state

According to Ponce de Leon, the division and regionalization sit well with President Rodrigo Duterte’s push for changing the country’s current unitary form of government into a federal one.

“To become a federal state, Palawan should be divided into 3 provinces to constitute a region with the city of Puerto Princesa as its regional center,” he said in his explanatory note.

Ponce de Leon further underscored how Palawan would “benefit from federalization if it is made a federal state by itself and not simply one province of another federal state.”

For a natural resource-rich province boasting resource-based industries like mineral and oil-rich Palawan, federalism is appealing since it would allow this wannabe region to retain most of its income instead of sending it to the national government. (READ: Duterte: Federalism allows regions to keep most of their income)

If declared an autonomous region or state, Palawan would have primary responsibility for developing its industries, public safety, education, healthcare, transportation, recreation, and culture. It will also have more power over its finances, development plans, and laws exclusive to its jurisdiction. (READ: Will federalism address PH woes? Pros and cons of making the shift)

More portions to be ironed out

Last Wednesday, July 5, the provincial board tackled the matter in a joint deliberation of the committees on local government and rules and laws.

The meeting revolved around the issue of which to undertake first – “to divide the province into 3 provinces or to push for regionalization” – so it would seamlessly breeze through Congress and the Senate, according to 1st District board member Roseller Pineda, chair of the committee on rules and laws.

“From that, a question already arises,” he told Rappler by phone on Sunday, July 9. “We need to address that as a body.”

Pineda said the proposal would go through a lot of changes to consider certain matters, like grouping the towns according to proximity to each other, local economy, as well as prevailing customs and traditions.

To make sure “no one would be left behind,” another concern to look at, according to Pineda, is the delineation of political boundaries and the capacity of the soon-to-be clustered towns to stand as a new province.

The provincial board has set meetings with Palawan Governor Jose Alvarez and the province’s 3 congressmen to get backing and have their suggestions included in the proposal.

Alvarez has already expressed support for the proposal, saying it would speed up development and the quality of life in the entire province.

1st District Representative Franz Josef George Alvarez refused to take a categorical stand on the matter back then, but he said he would follow public consensus.

A technical working group will soon be created to further study the proposal before presenting it in public consultations. – Rappler.com