Jul 12, 2017 8:50 PM PHT
Paterno Esmaquel II
Facebook Twitter Copy URL
Copied
'Those who raise the issue of war with China either do not understand the 3-warfare strategy of China, or simply are scaring Filipino people to make them submit to China,' says SC Senior Associate Justice Antonio Carpio 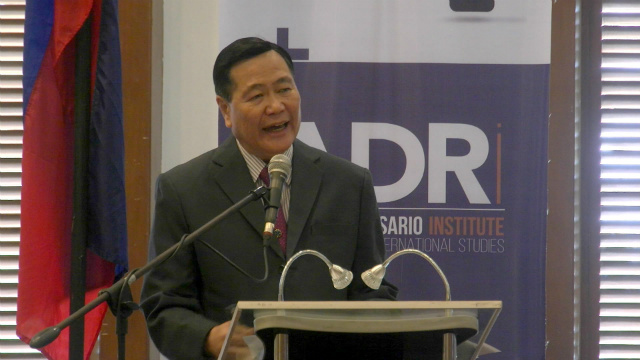 One of those who have raised this possibility is President Rodrigo Duterte himself.

In a forum on Wednesday, July 12, Carpio said: “The option for the Philippines is not either to talk to China or go to war with China. This is a false option, and shows a dismal lack of understanding of international law and international relations.”

Carpio explained: “China itself does not want war because war will give the US an excuse to intervene in the South China Sea dispute, considering the existing Philippine-US Mutual Defense Treaty. China’s strategy is to control the South China Sea without firing a single shot.”

Carpio pointed out, too, that many people do not understand China’s “3-warfare strategy.” The 3-warfare strategy refers to China’s use of “3 mutually reinforcing strategies” of psychological operations, media manipulation, and legal warfare, The Diplomat reported in 2015.

Carpio said, “Those who raise the issue of war with China either do not understand the 3-warfare strategy of China, or simply are scaring Filipino people to make them submit to China.”

Carpio made these remarks in a forum organized by the Stratbase-Albert del Rosario Institute on Wednesday.

It was the first anniversary of the Philippines’ legal victory against China over the South China Sea, in a ruling by an arbitral tribunal in The Hague. (READ: PH hails ties with China on year 1 of Hague ruling)

During Wednesday’s forum, Carpio explained that war with China is unlikely also because “the Philippine Constitution prohibits war as an instrument of national policy.”

He added that the United Nations Charter “has outlawed war as a means of settling disputes between States.”

“In resolving the South China Sea dispute, war is not an option, and has never been an option. That is precisely why the Philippines filed the arbitration case, because war was never an option and the Philippines will surely lose, and lose badly, in any war with China,” Carpio said.

In his remarks during the forum, former foreign secretary Albert del Rosario said “any suggestion of war should be shunned.” (READ: PH urged to ‘reassume leadership’ a year after Hague ruling)

“Instead, we should exhaust our diplomacy by protesting the threat of war, however unlikely it may be in actuality. We cannot allow others to play with the threat of war when our submitted disputes have already been clarified in the ruling,” Del Rosario added. – Rappler.com