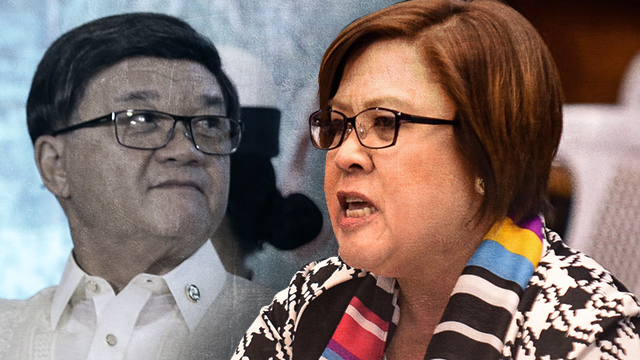 MANILA, Philippines – In a complaint filed before the Office of the Ombudsman on Thursday, July 13, detained Senator Leila de Lima accused Justice Secretary Vitaliano Aguirre II of forcing employees to turn against her.

For this, De Lima filed criminal complaints of grave coercion and falsification of documents against Aguirre.

De Lima was arrested and detained late February after the Department of Justice (DOJ) filed 3 counts of drug trade against her for supposedly extorting drug money from New Bilibid Prison convicts. (READ: De Lima in jail: ‘I never imagined Duterte would be this vindictive’)

De Lima said Aguirre confronted the employees with bank transaction slips which later turned out to be fake. De Lima attached a sworn statement from Obuyes which details her account of Aguirre’s supposed coercion.

“She said she was called by Aguirre under the impression that she was to renew her contract with the DOJ. However, Obuyes was surprised that Aguirre confronted her with deposit slips under the name ‘Bogs Obuyes,’ which she said was impossible, as this was not her full name,” the complaint reads.

De Lima quotes from Obuyes’ sworn statement where she said Aguirre tried to pressure her to testify against De Lima. Obuyes refused to do so.

De Lima said Caranto verified the supposed bank accounts in the branch and found nothing.

“It was discovered that the bank accounts that respondents showed were not under the name of Caranto and likewise verified that Caranto did not have any account with the bank. It was also discovered that one of the alleged transactions happened on a holiday, when the bank was closed,” the complaint said.

De Lima also hit Aguirre for allowing Sandra Cam to have access to the DOJ and inside Bilibid during the case buildup.

Cam and Solicitor General Jose Calida went inside Bilibid to talk to inmate Jaybee Sebastian when government was readying charges against the senator. This is included in Sebastian’s affidavit, quoted by Associate Justice Marvic Leonen during oral arguments at the Supreme Court.

De Lima has already accused Calida of trying to bribe Sebastian but the Solicitor General, without addressing the Bilibid visit, dismissed it as “just another act of desperation by the delusional, hypocrite De Lima.” (READ: Jose Calida’s many hats for friend Rody)

The drug complaints against Baraan were junked by the DOJ panel that charged De Lima.

Francisco also said that Public Attorney’s Office (PAO) chief Persida Acosta told her never to tell anyone that Cam was pressuring her to testify against De Lima. Rappler asked Acosta to comment but the PAO chief has yet to respond as of posting time.

Francisco also said that after saying she had nothing incriminatory to say against De Lima, she was pulled out from testifying before the House of Representatives in its series of hearings on the Bilibid drug trade.

“Aguirre used the whole DOJ machinery to orchestrate and execute the malicious prosecution of De Lima as the alleged leader of the New Bilibid Prison drug lords,” the complaint reads.

Francisco told all these to her boss, DOJ Technical Staff Director Maria Charina Buena-Dy Po in a letter dated October 11, 2016. The letter was attached to De Lima’s complaint.

Aguirre and his spokesperson Undersecretary Erickson Balmes have not responded to requests for comment.

De Lima’s 27-page complaint before the Ombudsman lists 6 criminal offenses allegedly committed by Aguirre which includes negligence in prosecution for allegedly directing prosecutors to not file a case against law enforcers waging the war on drugs.

De Lima also filed a graft complaint against Aguirre over the non-prosecution of extrajudicial killings. The complaint also includes administrative offenses allegedly committed by Aguirre when he made false announcements to media, including a fake meeting in Marawi City among opposition lawmakers and Marawi clans.

While critics have tagged Aguirre as the “fake news king,” he continues to enjoy the President’s trust. De Lima, meanwhile, is one of the fiercest critics of Duterte. – Rappler.com