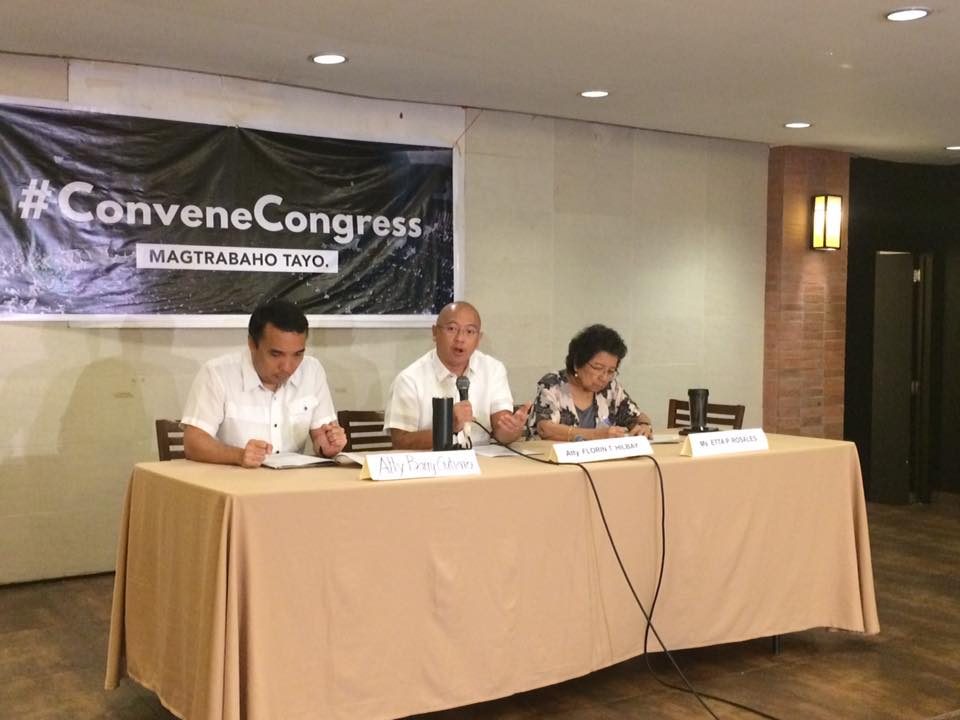 Facebook Twitter Copy URL
Copied
'The Court can still decide regardless of the expiration of the 60-day period, but the best time to decide is now,' says former solicitor general Florin Hilbay

MANILA, Philippines – Why has Congress not convened on martial law in Mindanao yet, and does it have to?

This is what former solicitor general Florin Hilbay wants answered as he filed on Friday, July 14, a manifestation before the Supreme Court (SC) urging a faster resolution of their petition seeking to make Congress convene on martial law.

“It is imperative that a decision be made by this Honorable Court not only to clarify the duties of Congress under Article VII, Section 18 of the Constitution, but also to ensure that all branches of government are henceforth properly guided,” the petition reads.

Hilbay, joined by more than 300 lawyers including detained Senator Leila de Lima and constitutionalist Christian Monsod, petitioned the SC in June to compel the House of Representatives and the Senate to hold a joint session to deliberate on martial law.

The High Court has not decided on it yet and moved to resolve first the more urgent petitions seeking to nullify the proclamation. SC, in a landmark ruling, upheld the constitutionality of Proclamation 216.

‘Best time to decide is now’

Hilbay stressed the urgency of an SC decision, as Duterte’s proclamation is set to expire on July 22, after the 60-day period of imposition under the Constitution. In view of the calendar, the last time the SC can issue a decision will be on July 18, Tuesday, its last en banc session before July 22.

“The Court can still decide regardless of the expiration of the 60-day period, but the best time to decide is now. If the President decides to extend the proclamation or decides to proclaim anew, it becomes more problematic for the SC because you’re deciding a live case,” Hilbay said.

The manifestation was filed in light of some pronouncements by the military and police to recommend an extension of martial law. Speaker Pantaleon Alvarez, for his part, even said he prefers to extend martial law to another 5 years, or until the end of Duterte’s term in 2022.

According to the petitioners’ manifestation, the SC’s landmark ruling even affirmed the need for a legislative review.

During the group’s press conference, among those with Hilbay were lawyer Barry Gutierrez, legal adviser for Vice President Leni Robredo; and former Commission on Human Rights Chair Etta Rosales.

The petitioners also said cited the constitutional duty of Congress to review Proclamation 216.

“This duty is required by the Constitution for a reason: to ensure the people, through their representatives, are able engage, to the fullest extent possible, in an open and robust discussion of the merits (or lack thereof) of the exercise of such a potent power that is, in essence, anti-democratic and so prone to abuse,” the petition said.

Gutierrez cited the reason why a  joint session of Congress on martial was necessary.

Gutierrez added: “To be clear, we are not asking the Congress to revoke martial law. We’re asking you to convene, pag-aralan ‘nyo, gawin ‘nyo ang trabaho ‘nyo (study it, do your jobs).” – Rappler.com