Duterte: Ombudsman’s charges vs Aquino sure to fail 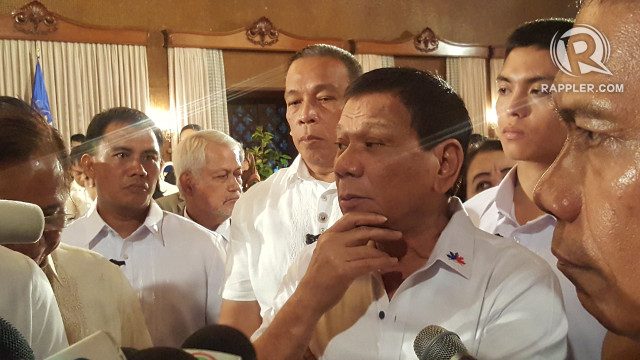 In a media interview on Monday, July 17, Duterte also said the charges against his predecessor were made to fail.

He said that, as president, Aquino had every right to ask for advice from suspended Philippine National Police (PNP) chief Alan Purisima on the Mamasapano operation.

“You can’t say usurpation of authority…He can call on anybody to help him fight a criminal operation there. He was not using the administrative talent in appointments, signing, he was just asking for the advice from the professional police. I do not see anything wrong there,” said Duterte.

“Nothing was signed, nothing was agreed by Purisima except that he was helping the President implement the law. Whoever he gives instructions to, you have no right to interfere because he has the trust [of the President].”

Ombudsman Conchita Carpio Morales’ 35-page resolution on the complaint against Aquino includes the filing of usurpation of authority charges against the former chief executive.

Aquino is accused of allowing Purisima to help direct Mamasapano operations even if he was suspended at the time due to graft charges.

Duterte said it seems the Ombudsman’s charges against Aquino were made to fail.

“The charges are there to ensure its failure…He (Purisima) was just being consulted so the charge against Aquino will fail,” the President said.

In the past, Duterte himself has criticized Aquino for the botched police operation, blaming him for ill-coordinated support for the PNP Special Action Force (SAF) which ultimately led to the deaths of 44 elite cops.

This is the second time in a single day that Duterte has criticized the Ombudsman. Earlier, during the oath-taking of new appointees, he told Morales to “shut up” after she said it was “unacceptable” for him to make threats about killing criminals.

Morales, an Aquino appointee, will end her term in 2018. – Rappler.com