Grab, Uber to keep drivers on the road until LTFRB clarifies order

Jul 17, 2017 10:10 PM PHT
Rambo Talabong
Facebook Twitter Copy URL
Copied
(UPDATED) Transport network giants Uber and Grab will keep their drivers on the road, even those without permits, as they await a clarification on the LTFRB order that stands to affect thousands of commuters 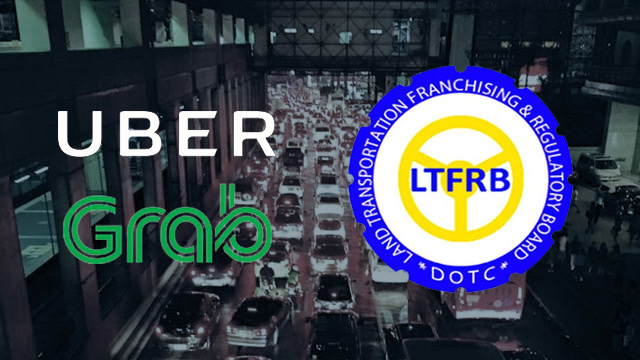 MANILA, Philippines (UPDATED) – Grab and Uber will keep their undocumented drivers on the roads until the Land Transportation Franchising and Regulatory Board (LTFRB) clarifies its order, the transport network giants announced on Monday, July 17.

“The new order by the Land Transportation Franchising and Regulatory Board has caused a lot of concern with the [transport network vehicle service] community. We understand the predicament of drivers, and so at this time we will not deactivate any of our partners,” Grab said in a statement.

In a separate statement reported by ABS-CBN News, Uber said: “We will not deactivate. We continue to support our partner drivers. We are working with government on best way forward to level the playing field up.”

The companies are reacting to the July 11, 2017 LTFRB order which demanded that transport network companies (TNCs) such as Grab and Uber purge its undocumented drivers, which make up 80% of all their operators, by July 26, 2017.

According to Grab, they will only begin to expel undocumented drivers once they have a technical working group meeting, where commuters are invited to air out their concerns. (READ: LTFRB tells Grab, Uber: ‘We will not succumb to pressure’)

“We urge the LTFRB to convene the technical working group as soon as possible so we can discuss important matters affecting the TNC-TNVS industry, more so the riding public,” Grab said.

However, Grab said they are already taking steps to follow LTFRB as they have not allowed new drivers who do not have permits from the LTFRB to operate.

Uber, for its part, continues to let new drivers without permits to operate, according to LTFRB board member Aileen Lozada.

The number of these undocumented drivers grew dramatically over the last year because of an earlier LTFRB order which had barred new drivers from applying for provisional authority (PA) permits.

These PA permits allow TNVS drivers to operate for 45-135 days, and precede the longer certificate of public convenience (CPC) franchise which lasts from 1-7 years.

With the LTFRB preventing the inflow of new drivers needed by TNCs to replace those who leave, Uber and Grab continued to accept and allow new drivers even without permits from the LTFRB. They also allowed drivers who had expired permits to continue to operate.

This prompted the LTFRB to fine Uber and Grab P5 million each for negligence, and set the deadline for the removal of undocumented drivers.

With their defiance of the LTFRB, Grab and Uber put themselves in hot water as their accreditation as a TNC is still under review by the regulatory board. But with overwhelming public support, they are confident they will pull through.

“The enforcement has been ongoing since last year in all cities where we operate. Be that as it may, Grab stands by the side of its partner-drivers who represent the safest most reliable transport service providers in the country,” Grab added. – Rappler.com