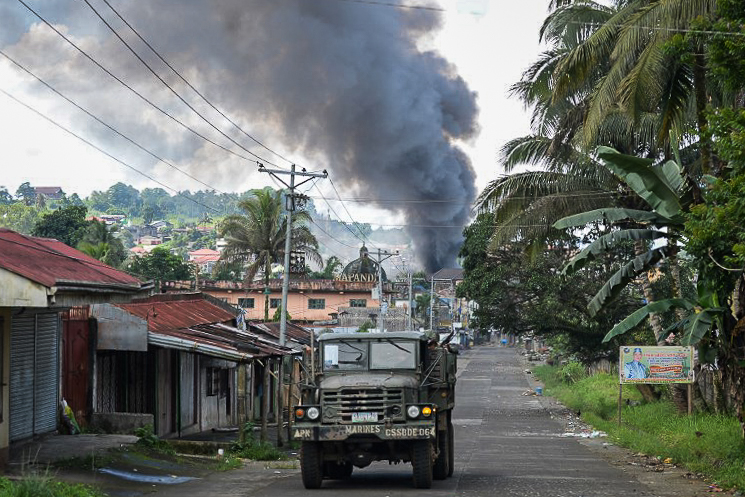 Philippine troops have been battling to dislodge militants loyal to the Islamic State group (ISIS) who seized parts of the southern city of Marawi on May 23 in a bid to establish a base in the Mindanao region, which shares sea borders with Malaysia and Indonesia.

ISIS has said it plans to establish a caliphate in Southeast Asia as it did in parts of Iraq and Syria.

More than 550 people, including 413 militants and 98 government forces, have been killed in the Marawi fighting, which enters its third month this weekend.

Singapore’s defense ministry said its offer includes the use by Filipino troops of its urban warfare training facilities and a detachment of drones.

It also offered a C-130 transport plane to deliver humanitarian supplies to evacuees from Marawi, the ministry said in a statement issued after a visit to Manila by Defence Minister Ng Eng Hen on Tuesday and Wednesday.

Ng on Tuesday met his counterpart Delfin Lorenzana, who “expressed his appreciation and in-principle acceptance of the offer from Singapore,” the statement said.

Philippine troops, long used to fighting in the jungle against communist and Muslim insurgents, have struggled against the militants in bloody street-to-street combat.

Singapore’s offer is the first from a fellow member of the Association of Southeast Asian Nations (ASEAN) apart from joint maritime patrols involving the Philippines, Indonesia and Malaysia.

Australia and the United States provided spy planes, and China sent some guns and ammunition to help troops in Marawi.

Singapore’s defense ministry said Philippine forces were confident of liberating Marawi, but “further concerted efforts are required to ensure that other terrorist cells do not entrench themselves in the southern Philippines as this would cause instability to the rest of ASEAN”.

ISIS could use bases like Marawi to “launch further attacks against other cities within the Philippines and ASEAN, and urge their cells to attack targets in Indonesia, Malaysia and Singapore”, added defence chief Ng in a Facebook post. – Rappler.com