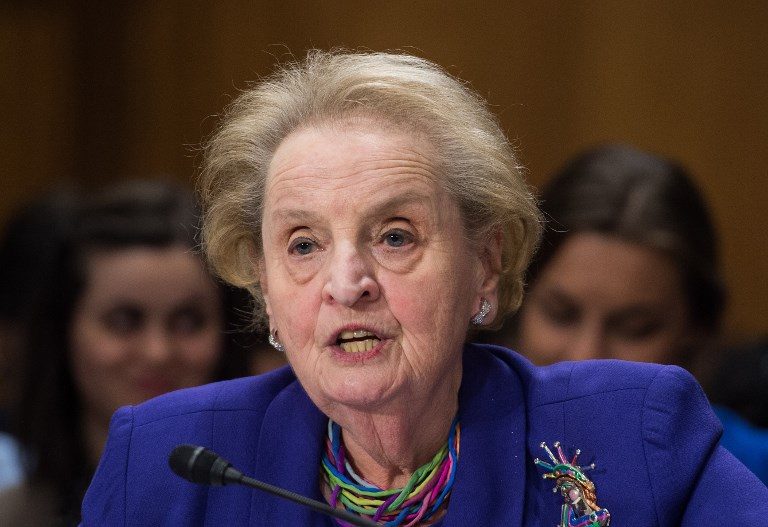 Facebook Twitter Copy URL
Copied
Former US Secretary of State Albright: 'One of the things that I think people need to understand in the Philippines (is) that investors do not want to go into a place where the rule of law is under question'

The United States – along with the United Nations, the European Union and international watchdogs – has expressed concern about alleged extrajudicial killings and rights violations in the campaign.

Albright, who served under then-president Bill Clinton, was asked at a forum in Manila organized by ABS-CBN network about her advice to investors.

“One of the things that I think people need to understand in the Philippines (is) that investors do not want to go into a place where the rule of law is under question,” said Albright, 80, who runs an eponymous private investment firm.

“Therefore government institutions and the rule of law are very important because despite the fact that investing in its nature is risky, it is better for countries themselves to make it less risky as possible,” she said, without directly commenting on Duterte’s policies.

Duterte, 72, won elections last year on a promise to kill tens of thousands of criminals to prevent the Philippines from becoming a narco-state.

Since then police have said at least 3,200 people were killed during their anti-drug operations.

Thousands more people, some of them described by the authorities as drug users, have been killed by unknown attackers.

Rights groups have warned that Duterte and the police may be overseeing a crime against humanity.

A defiant Duterte insists his pronouncements to kill criminals and his security forces’ actions are within the law and meant to save generations of Filipinos from the drug menace.

Duterte has been prickly about US criticism, calling then-president Barack Obama a “son of a whore” and the previous US ambassador to Manila “gay”.

However on Tuesday, July 18, new US ambassador Sung Kim said ties between the two nations have become “much more positive”.

In a separate development, 4 members of the European Parliament met a jailed senator and leading critic of Duterte on Wednesday in a show of support, reiterating calls for her release.

The legislators visited Senator Leila de Lima in her cell at national police headquarters where she has been held since February on alleged drug charges.

The European Parliament in March urged the Philippines to release de Lima. Critics say the real reason for her detention is her criticism of the bloody war on drugs.

“The delegation’s purpose of the visit is to express our concerns as parliamentarians in Europe about the case of de Lima,” the head of the delegation, Soraya Post, said after the meeting. – Rappler.com