How PH reaps fruits of Quezon’s kindness to Jews

Jul 22, 2017 9:11 AM PHT
Paterno Esmaquel II
Facebook Twitter Copy URL
Copied
Visa-free entry to Israel is one of the ways that the Jewish people have repaid the 'moral conviction' of former Philippine president Manuel L. Quezon 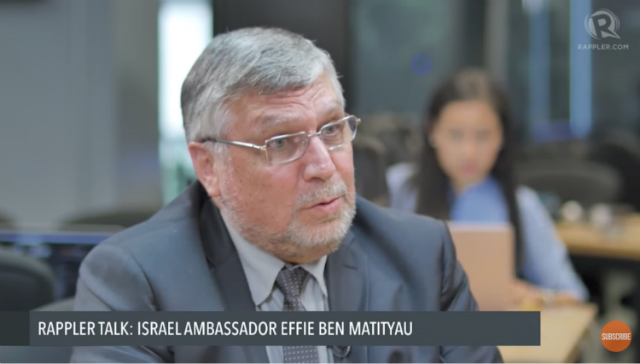 MANILA, Philippines – In the 1930s, the Philippines under President Manuel L. Quezon welcomed up to 1,200 Jewish refugees fleeing the Nazi regime.

Quezon “agreed out of his moral conviction,” Israeli Ambassador to the Philippines Effie Ben Matityau said in a Rappler Talk interview with Maria Ressa on Thursday, July 20. (READ: When the Philippines opened its doors to Jewish refugees)

Back then, he explained, “nobody wanted to be humanitarian,” and “everybody was closing the doors” on the Jews.

“There you have the biggest moral collapse of those who call themselves enlightened nations. That was a total darkness and collapse,” Matityau said.

The Jewish refugees, also known as “Manilaners,” have more than 8,000 descendants in the Philippines today.

One of them is Philippine President Rodrigo Duterte’s former wife, Elizabeth Zimmerman, who Matityau said is a granddaughter of a Jewish refugee.

The ambassador said Israel is also grateful that the Philippines, in 1947, became the only Asian country to vote for the statehood of Israel before the United Nations.

The Philippines accepting Jewish refugees, and later voting for the statehood of Israel, “are always the pillars that created this very sentimental relationship between the two peoples.”

“So yes we have a close relationship. It’s a growing one. It’s across administrations, Matityau said. – Rappler.com