21,000 houses for soldiers on Edsa anniv The turnover of some 21,000 housing units happened in Trece Martires, Cavite as one of the highlights of the Edsa People Power Revolution’s 26th anniversary on Saturday, February 25. A civilan-backed soldiers’ mutiny paved the way for the 1986 Edsa Revolution that catapulted Aquino’s mother, Corazon, to the presidency.

In a statement, Malacañang said this initiative also addresses “the primary housing needs of low-salaried men in uniform.”

Speaking before the beneficiaries, Aquino cited the common financial problems of military men and women.

“Kung kapusin, malamang ay mangungutang sila. At kapag nalubong na sa utang, pumapasok na at nagdadalawang-isip kung mananatili bang tapat o magpapadala na sa agos ng bulok na kalakaran,” the President said. (If they run short, certainly they will borrow money. And if they get buried in debt, they begin to entertain thoughts of whether they’ll remain faithful to their duty, or allow the corrupt system to sweep them away.)

“Umaasa tayong maiibsan nito ang kaba ninyo tuwing madedestino sa malayong lugar ukol sa seguridad ng inyong pamilya, at ang agam-agam sa pagbabayad ng mahal na upa sa bahay,” he said. (We hope that this will ease your worries, whenever you get assigned to faraway places, about the safety of your families as well as your monthly housing rental bills.)

The government is implementing the housing program under Administrative Order 9, “Directing the National Housing Authority to Formulate, Implement, and Manage a Housing Program for the Military and Police Personnel,” which Aquino issued in April 2011.

Under the program, beneficiaries can pay for the housing in a staggered mode over a 30-year period. 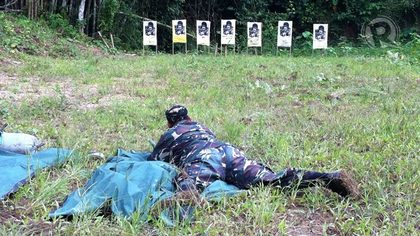 Beneficiaries will need to pay P200 a month for a standard-row house in the first 5 years, according to the Palace statement.

The payment will gradually increase to P809.53 during the 26th to 30th year, “allowing them to use and allot more of their income for the other needs of their families.”

The low salary of soldiers, among other things, has led to a sagging morale among them, according to the book The Enemy Within that was launched last year.

In 2010 alone, the lowest ranking military personnel – candidate soldiers – got P9,508 monthly, based on data from the Armed Forces of the Philippines (AFP). The generals, the highest ranking AFP members, meanwhile earned P47,500.

Problems like corruption, poor tactics and training, and politicization also plague the AFP – still begging to be addressed by the Aquino administration. – Rappler.com