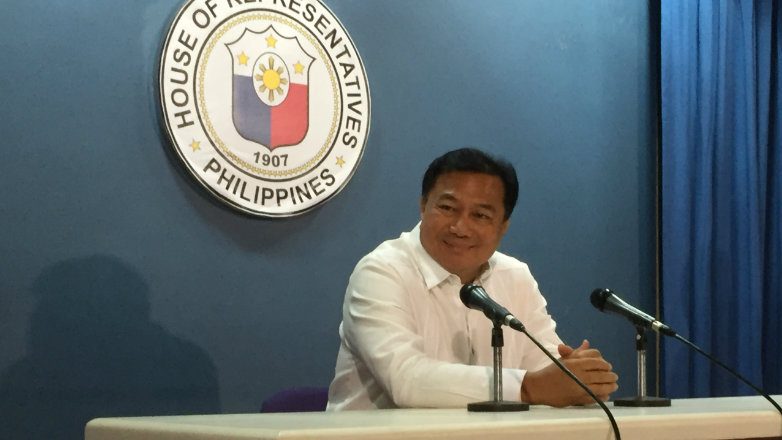 MANILA, Philippines – Speaker Panteleon Alvarez on Monday, July 24, said legislation that would introduce the option of civil unions and dissolution of marriage would “make marriage stronger,” as he laid out the House of Representatives’ legislative priorities for the year ahead.

(The beauty of the civil union and dissolution of marriage laws is this: These laws are double bladed. Under this law, if two parties are married, both of them will be encouraged to make the other party happy.)

“Both parties kailangan masaya sa (have to be happy in a) marriage, so you have to endeavor na masaya ang partner mo (that your partner is happy),” he added.

“Dissolution of marriage,” as defined by Alvarez, gives married couples or a married individual the option to end their union on the basis of “unhappiness.”

Without giving specifics, Alvarez said he estimates it would take one day at most to dissolve a marriage should both parties agree to it.

He said he will consult overseas Filipino Workers, citing instances where returning OFWs find theirs spouses already in new relationships.

“I think this will make the marriage stronger because both parties will see to it that the other partner is happy,” said Alvarez, who is still legally married but estranged from his wife.

Asked why he preferred a “dissolution of marriage” over a divorce law, Alvarez said divorce would be “too complicated,” adding that he would rather craft laws based on Filipino sensibilities.

Currently, couples who want their marriage to end only have the option of annulment, wherein a marriage is declared void from the very beginning.

Annulment in the Philippines is an expensive and lengthy process. Couples may also opt for legal separation, a separation of bed and board for the couple. Neither parties are allowed to re-marry. (READ: The annulment business)

Reiterating a promise made in October 2016, Alvarez on Monday also pushed for a bill that would institutionalize civil unions for both heterosexual and same-sex couples. Under the proposed legislation, couples who avail of civil unions will be given the “property relations,…right to support each other, and the right to adopt children,” according to Alvarez.

The unions will be officiated by either a judge or mayor, her said. – Rappler.com