MARAWI CITY, Philippines – There’s roof over their heads and food is plenty for evacuees in Saguiran, a town next to Marawi City that donors have frequented to help residents displaced by the war.

Jasmin Ali said she must not complain. She, her husband, and 5 children are safe on the floor of a multi-purpose gymnasium, away from the firefight and air strikes that to this day pound her village in Marawi.

But Ali and many evacuees from Marawi are aching to go back home two months since clashes erupted with local terror groups linked with the Islamic State.

This is the message she wants to send President Rodrigo Duterte as he delivers his State of the Nation Address on Monday, July 24.

It’s the children many parents are worried about as the war drags on for over two months now. Ina Daro, 18, gave birth to her second baby at a health center beside the gymnasium on June 13. She’s worried that the cold floor will make her child sick.

They want the war to end and martial law lifted, a sentiment shared by many evacuees.

As of July, there are at least 351,168 evacuees from Marawi and neighboring towns.

The military said they have contained the terrorists in 3 villages covering about a square kilometer.

“The main battle area is very dynamic. It’s very fluid. We keep adjusting to the threat and to the terrain. That’s why we keep on adjusting,” said Lieutenant Colonel Jo-ar Herrera, spokesman of Joint Task Force Marawi.

Isnilon Hapilon, the supposed emir of ISIS that joined forces with the local Maute Group, is still reportedly in the battle area, according to the military. 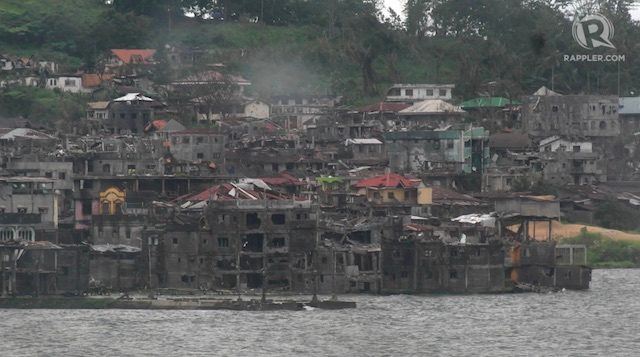 The terror groups are believed to be holding about a hundred hostages and another 200 or 300 residents are trapped in their homes, according to the military.

On July 20, the military regained control of a road extending from Mapandi Bridge, a major triumph in the battlefield. (READ: 100th soldier killed day after gov’t takes bridge)

But it was followed by a bloodbath on July 22 when 9 soldiers were killed and 41 others were wounded in several operations.

Defense Secretary Delfin Lorenzana said enemy strength was unexpected. He said he fears the war could drag on for a little while longer.

Outside the battle zone, the city is a ghost town. But the military maintained it’s not safe for the residents to return yet.

“Hanggang ngayon, may nakikita tayong (Up to now, we still see) improvised explosive device in the controlled area. We still recover war materiel. There are stray bullets na minsan lumalabas sa (that sometimes get out of) main battle area,” said Herrera.

Vocal residents launched a campaign to demand the military to let them back to their homes, threatening to forcibly enter “controlled areas” in the city. On Sunday, Cabinet officials met with the groups and persuaded them against it.

The military is asking for understanding as it pushes to end the war with the local terror groups.

The worst that can happen is that the residents soldiers are dying to protect will turn their back against the government. Herrera said the military will hold continuous dialogue with them. – Rappler.com