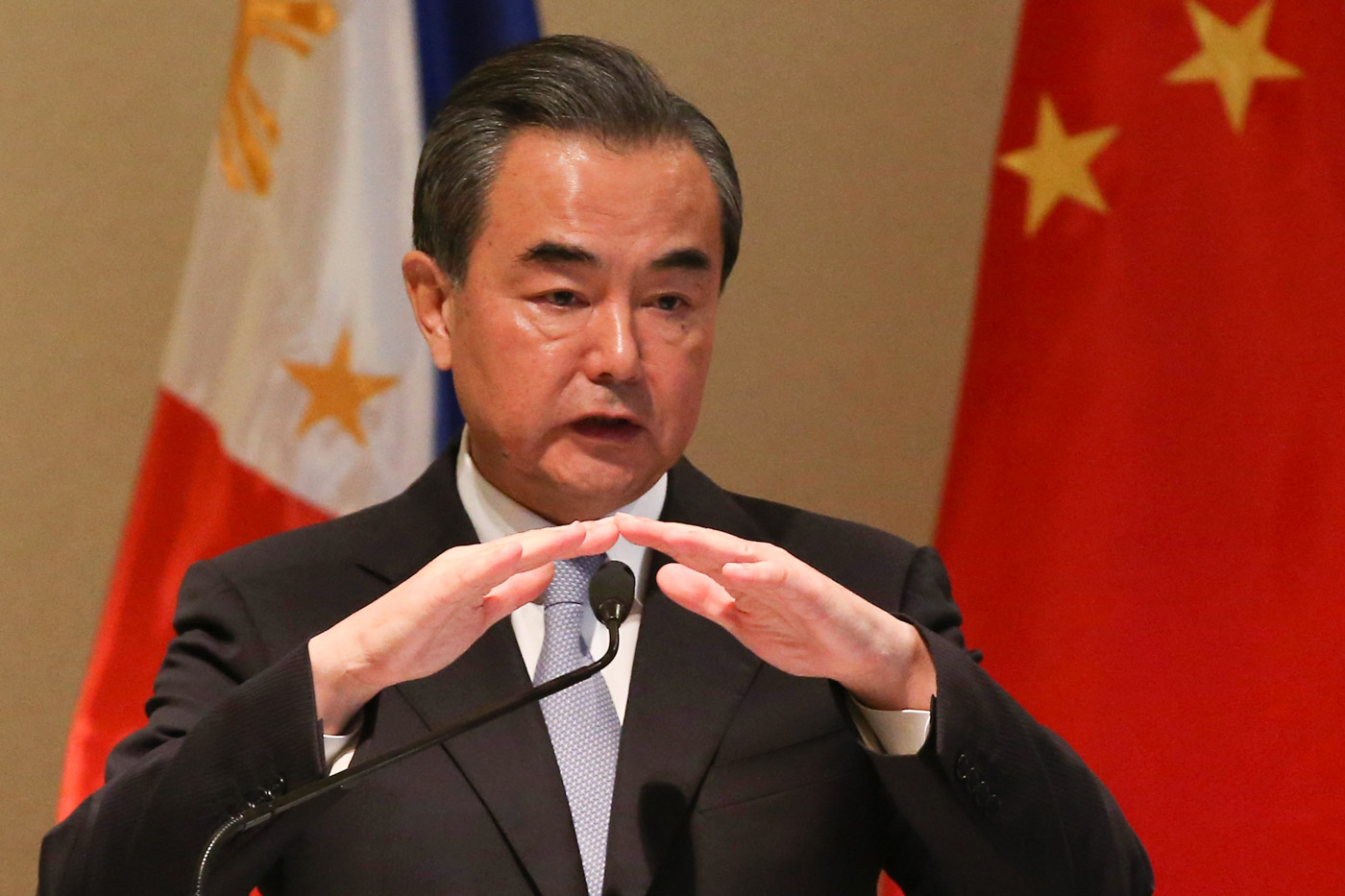 MANILA, Philippines – Chinese Foreign Minister Wang Yi pushed for joint development in the disputed West Philippine Sea (South China Sea) as he made a rare overnight trip to Manila at the invitation of the Philippine government.

In a press conference on Tuesday, July 25, Wang said joint development in the West Philippine Sea is “full of political wisdom.” He said it “might lead to tensions” if any country explores disputed waters on its own.

“Well, in waters where there is overlapping of maritime rights and interests, if one party goes for unilateral development, then the other party will take the same actions, and that might complicate the situation at sea,” Wang said in Manila.

“That might lead to tensions. And as the end result, nobody might be able to develop the resources,” he added.

Wang made these remarks after a journalist asked for details about President Rodrigo Duterte’s statement on Monday, July 24, that Filipinos can soon expect joint exploration for oil in the West Philippine Sea.

Wang spoke at a joint press conference with Philippine Foreign Secretary Alan Peter Cayetano at the Shangri-La Hotel in Taguig City on Tuesday. Before this, Wang and Cayetano held a bilateral meeting in the same hotel, and signed a memorandum of understanding for closer cooperation.

Deng made the proposal “of pursuing joint development” in a meeting with then President Corazon Aquino in 1988.

Rather, it is about the two sides, upon consultation, coming up “with the common goals” or entering “into a kind of agreement for joint development.”

“I hope that the two sides could make the decision so that the goodwill embodied by Mr Deng Xiaoping’s proposal 31 years ago could lead to fruition today and could benefit the people of both countries,” he said.

Wang visited the Philippines less than a year after President Rodrigo Duterte met with Chinese President Xi Jinping in China, and less than a month after Cayetano also went to China to meet with Wang.

Cayetano on Tuesday also talked about Duterte’s statement on joint development with China.

Cayetano began his explanation by describing Filipinos as “a very spiritual people,” who “believe that natural resources are a blessing from God that should be enjoyed by its people.”

He also pointed out that “development” is key to ending poverty and other social ills such as the illegal drug trade, insurgency, and terrorism.

Cayetano cited joint development in the Malampaya gas field as “an example of how the Philippine Constitution allowed exploration and development of our natural resources despite the cooperation with some foreign corporations or foreign entities.”

What Cayetano did not say is that the joint development in Malampaya is being done under Philippine laws.

Cayetano did not say if the proposed joint development with China will be done under Philippine or Chinese laws, which would depend on who has the exclusive rights over the disputed waters.

During his presidency, President Benigno Aquino III had said that joint exploration with China was possible, but only if Philippine laws are followed. (READ: Aquino: Venture with China harder to keep than marriage)

Earlier, Supreme Court Senior Associate Justice Antonio Carpio pointed out that Shell “is lifting the gas in Malampaya,” the gas field that provides 40% of electricity in the Philippines’ biggest island group, Luzon.

“Shell is a 90% foreign-owned company. It can be done, but they are doing that as a contractor of the Philippine government. It’s not a sovereign agreement between two states,” Carpio explained in July 2016.

On when the talks for joint exploration will begin, Cayetano said on Tuesday that these “began in 1986,” when Deng and Mrs Aquino discussed the issue.

Cayetano said that in 31 years of discussion, however, the Philippines and China “have not found the wisdom to be able to push through to the next step.”

“And we are praying that this generation, under President Xi and under President Duterte, will have the wisdom to find a way that these natural resources will benefit our people,” Cayetano said. – Rappler.com