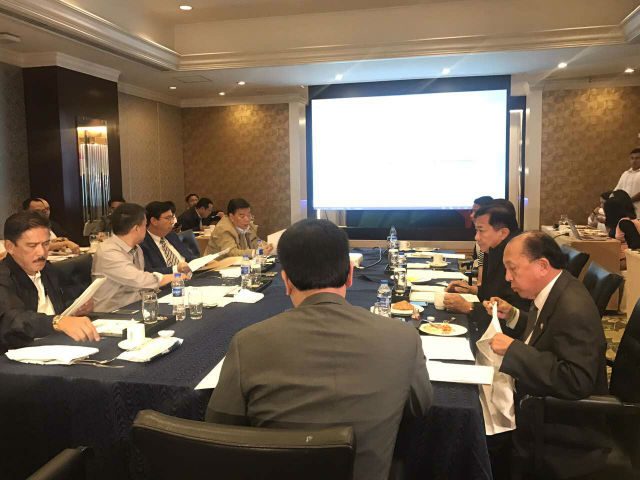 Facebook Twitter Copy URL
Copied
Leaders of the 17th Congress also prioritize measures on national land use, government procurement, and creation of the disaster response and management department, which the President mentioned in his SONA

MANILA, Philippines – Leaders of both houses of the 17th Congress agreed to prioritize the passage of 38 bills within the next months, with measures on ending labor contractualization, anti-discrimination, and tax reform topping the agenda.

The following leaders of the House of Representatives and the Senate met at the EDSA Shangri-La on Wednesday, July 26, to discuss their common legislative agenda:

As early as October 2017, both houses target to pass on 3rd and final reading bills aiming to end labor contractualization or “endo,” anti-discrimination, and the tax reform.

Of the 3, only the Tax Reform Act was mentioned by President Rodrigo Duterte in his 2nd State of the Nation Address. (READ: Duterte wants Senate to pass tax reform in full, zeroes in on Angara)

Other bills Duterte mentioned in his SONA are included in the list, including the National Land Use Act, review of procurement laws, and creation of a disaster response and management department. The first two are targeted to be approved by October, while the new department bill is being eyed by December.

Fariñas, however, said the House and the Senate are still deadlocked on the coverage of the anti-discrimination bill. Lawmakers committed to include discrimination against women, ethnic and religious groups, as well as the lesbian, gay, bisexual, and transgender (LGBT) community.

But some senators are not too keen on including the protection of LGBTs in the bill. (READ: After 17 years, LGBT anti-discrimination bill up for Senate debate)

“Mukhang medyo may resistance daw doon, mas mahirap… ‘Di ko na alam [sino]. ‘Di na ko nagtanong (It seems there is a resistance there and it would be more difficult… I don’t know who is resisting. I didn’t ask),” said Fariñas, saying senators will have to find a consensus on the matter.

Senator Manny Pacquiao had been previously criticized for his anti-LGBT remarks, saying gay men are “worse than animals.” – Rappler.com