No tuition for now for UP Manila, UPLB undergrads 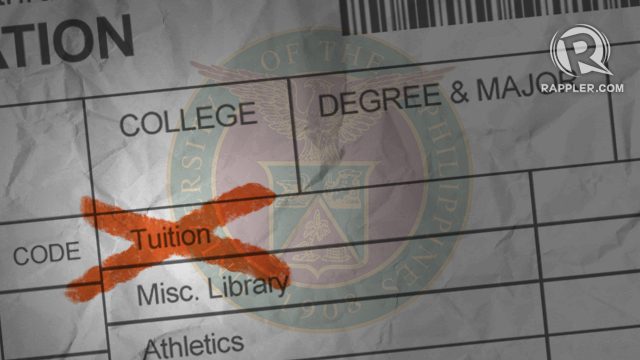 Facebook Twitter Copy URL
Copied
(UPDATED) In both campuses, the suspension – "until further notice – is applicable to those enrolling for the first semester of academic year 2017-2018

MANILA, Philippines (UPDATED) – The Manila and Los Baños campuses of the University of the Philippines (UP) announced this week the suspension of their tuition collection for the first semester of academic year 2017-2018.

UP Manila made the announcement on Tuesday, July 25, in a memorandum from the office of Vice Chancellor for Academic Affairs Nymia Simbulan.

“As per instruction of Chancellor Carmencita David-Padilla, tuition fee collection for the first semester of AY 2017-2018 is suspended until further notice is given by the Office of the Chancellor,” read the memorandum, which was posted on the official website of UP Manila.

It noted that the suspension is applicable to undergraduate students only.

UP Los Baños (UPLB) followed suit on Wednesday, July 26, when it posted on its Facebook page a copy of a memorandum also from the campus’ Office of the Vice Chancellor for Academic Affairs.

The memo signed by UPLB Vice Chancellor Portia Lapitan reads: “As instructed by Chancellor Fernando C. Sanchez Jr, tuition fee collection for undergraduate students for the first semester of AY 2017-2018 shall be suspended until further notice.”

UP Diliman – the flagship campus of the UP System – was the first to announce its decision not to collect tuition for the first semester of academic year 2017-2018 “until government is clear about their plan” on the tuition-free policy.

No such condition was mentioned by UP Manila or UPLB.

In a July 12 statement, UP Diliman Chancellor Michael Tan said that with the Commission on Higher Education’s tuition subsidy scheme and the Universal Access to Quality Tertiary Education Bill, “UP has to be even more careful about collection of payments.”

“We do not want to collect fees and then have to refund, or worse, to ask for additional payments,” Tan said.

“We support the calls for the passage of the universal access to tertiary education bill and the provision of adequate funds to implement whatever subsidies there will be. We will continue to adjust our registration procedures as needed,” he added. – Rappler.com