Faeldon’s chief of staff grilled for calling Alvarez an ‘imbecile’

Jul 26, 2017 6:49 PM PHT
Mara Cepeda
Facebook Twitter Copy URL
Copied
Lawyer Mandy Mercado Anderson smirks as lawmakers interpellate her over her Facebook post, prompting Majority Leader Rodolfo Fariñas to say, 'You want to be funny? Because I can erase that smirk off your face if you want' 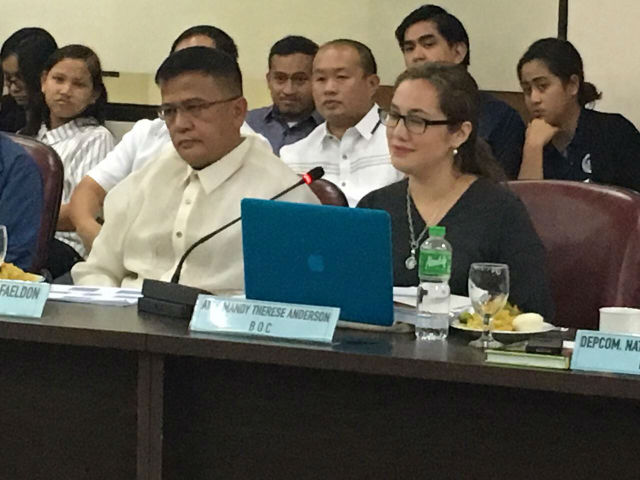 Lawyer Mandy Anderson was grilled by House Majority Leader Rodolfo Fariñas during the ways and means committee’s hearing on the BOC’s failure to stop the smuggling of P6.4 billion worth of high-grade shabu in its express lane.

The BOC was able to seize the drugs in two warehouses in Valenzuela City last May.

During the hearing, Fariñas flashed a screenshot of Anderson’s caption when she shared a news story on Alvarez threatening to dissolve the Court of Appeals over the detention case of 6 Ilocos Norte officials.

“This was sent to me by a lot of members because they were taken aback. I could not believe it myself that a government official would do it,” Fariñas told reporters after the hearing.

In her Facebook post about the Speaker, Anderson said: “I’m hoping and praying he tries so he realizes what an imbecile he is when he fails. Isn’t there anyone else in the House composed of 200+ representatives who can actually be Speaker? Nakakahiya na! (It’s embarrassing already!)” 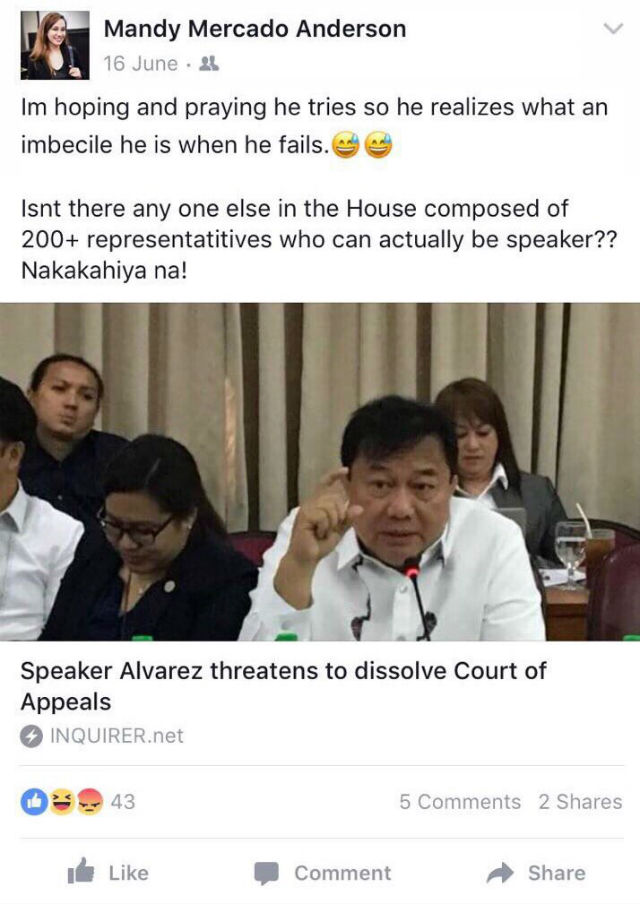 Anderson, a graduate of the Ateneo Law School like Alvarez and Fariñas, admitted to posting the statement in question.

“I believe I have the freedom to express my opinion regarding our elected officials,” said Anderson.

Fariñas then said Anderson’s post in effect also targets the rest of the members of the House. (READ: Rudy Fariñas, boss in the House)

Faeldon defended his chief of staff, saying he hired her because she landed in the top 5 of the 2015 Bar examinations and is a certified public accountant.

Anderson eventually apologized, explaining she did not mean to insult anyone and was merely “angry at that time over several issues.”

No more budget for BOC?

But the Majority Leader noticed Anderson kept on smirking as other lawmakers interpellated her about the Facebook post.

“You want to be funny? Because I can erase that smirk off your face if you want,” said Fariñas, causing Anderson’s face to turn serious.

Faeldon then admitted he only learned about Anderson’s Facebook post during the hearing itself. He said he would be filing an official report about it.

But the damage has been done. Anderson’s post further angered lawmakers who were frustrated that P6.4 billion worth of shabu got past the BOC.

Deputy Speaker Miro Quimbo made a manifestation that lawmakers should not provide a budget to the BOC if they would remain incompetent.

“Until this matter is sufficiently explained to the House, I will move that the BOC receive zero budget for the coming years,” said Quimbo.

“There is no way that a group of 290-plus imbeciles will approve the budget of an agency that calls it idiotic. There’s just no way,” he added.

While Fariñas seconded Quimbo’s manifestation, the ways and means committee did not vote on it.

The House is set to begin its deliberations on the proposed budget for 2018 of all government agencies next week, including the BOC. – Rappler.com