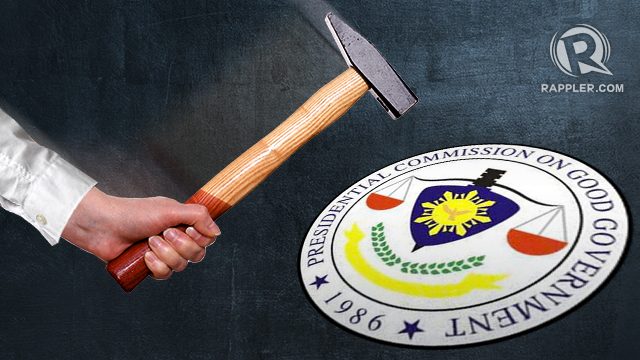 Facebook Twitter Copy URL
Copied
'They don't do anything. What do they do?' Budget Secretary Benjamin Diokno says as he tells reporters the government plans to scrap the Presidential Commission on Good Government (PCGG)

The announcement was the latest development in the remarkable political rehabilitation of the Marcos clan, which has accelerated since family ally Duterte became president last year.

“They don’t do anything. What do they do?” Budget Secretary Benjamin Diokno said as he told reporters the government planned to scrap the Presidential Commission on Good Government (PCGG).

The PCGG was set up 3 decades ago, just after a bloodless People Power revolt toppled Marcos, to recover the estimated $10 billion looted by the dictator and his allies during his 20 years in power which were marked by massive corruption and abuse.

The agency has since recovered P170 billion or about $3.4 billion in ill-gotten wealth as well as jewelry, art, and other assets.

But it is still working to find millions more, including 200 pieces of art by masters like Michelangelo and Picasso, alleged to have been purchased by the Marcos family. (READ: PCGG’s actions stained with politics – Bongbong Marcos)

Jean Enriquez, spokeswoman of iDEFEND, a human rights coalition, expressed shock at the announcement, saying “this is really a huge blow to human rights groups especially those who have been against the Marcos dictatorship.”

“This administration seeks to absolve the Marcoses from their responsibility to the Filipino people,” she said, recalling the strong ties between Duterte and the Marcos family.

Despite the death of the dictator in exile in Hawaii in 1989, his family has been making a political comeback in the Philippines with his widow, Imelda, and their children getting elected to office.

In November, Duterte stunned the nation by allowing the body of the late dictator to be buried in the national Heroes’ Cemetery despite a widespread outcry that his abuses and corruption exempted him from such an honor.

Bonifacio Ilagan, spokesman of anti-Marcos group Carmma, said the planned abolition of the PCGG was likely part of a wider scheme to help the Marcos son – popularly known as “Bongbong” – to get elected.

“Before we know it, we will wake up one day and Bongbong wins the elections and the ill-gotten wealth of the Marcoses is secured,” Ilagan, who was detained under Marcos, told Agence France-Presse.

Although a law would be required to abolish the PCGG, Diokno said the Duterte administration was drafting a bill allowing it to do away with government offices like the commission as part of a streamlining process.

Diokno expressed confidence the bill would be passed as key leaders of Congress, controlled by Duterte allies, have declared their support.

He questioned why the PCGG was still around after 30 years, saying it should have been “an ad hoc agency.”

“They (the PCGG staff) enjoy things because they have so many perks,” he remarked. (READ: Duterte appoints fellow Bedan to head PCGG) – Rappler.com