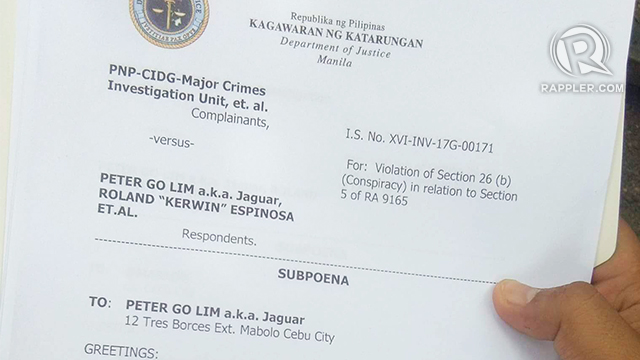 President Rodrigo Duterte has publicly accused Lim as one of the biggest drug traders in the country.

CIDG said a security guard received the document, which ordered Lim to appear at the Department of Justice (DOJ) Manila on August 14 and August 17, 2017, for a preliminary investigation in relation to illegal drug trade charges.

Lim, together with Roland “Kerwin” Espinosa and 6 others, is charged for the alleged violation of Section 26 (b) Conspiracy in relation to Section 5 of Republic Act 9165, or the Comprehensive Dangerous Drug Act of 2000.

This particular section refers to attempts or conspiracy to sell, trade, administer, dispense, deliver, distribute, and transport any dangerous drug or controlled precursor and essential chemical.

The DOJ earlier issued an Immigration Lookout Bulletin Order against Lim and the 7 co-accused.

“You are hereby warned that failure on your part to comply with this subpoena shall be considered as waiver to present your defense in the preliminary investigation and the case shall be considered submitted for resolution,” said Assistant State Prosecutors Michael John Humarang and Aristotle Reyes in the DOJ-issued subpoena, which they signed on July 17 in Manila. – Rappler.com