Faeldon to ‘corrupt’ politicians: Shame on you 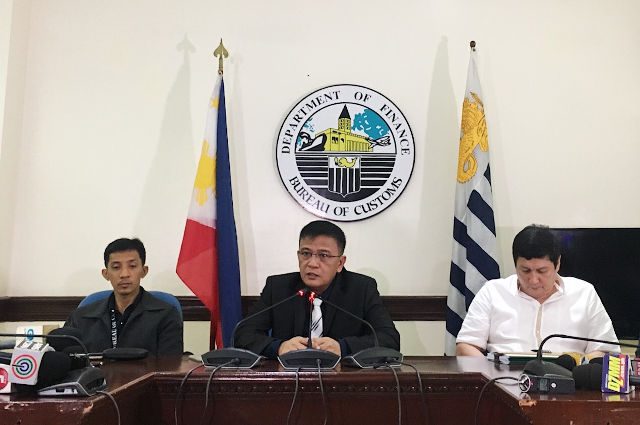 Facebook Twitter Copy URL
Copied
Customs Commissioner Nicanor Faeldon refuses to name these politicians with 'unreasonable requests' to the Bureau of Customs, but tells them to stop their corrupt ways

MANILA, Philippines – Bureau of (BOC) Customs Commissioner Nicanor Faeldon said getting out of his job “will be the happiest day of his life,” but also vowed that he would not step down.

“They can kick me out anytime,” Faeldon said in a press briefing on Wednesday, August 2. “But this is a mission for me and as a soldier, I will not quit.”

But Faeldon lashed back at politicians, saying they help perpetuate corruption in the BOC with their “unreasonable requests.”

Many of these politicians, he said, have people in the BOC “to protect the interests of their bosses.”

While Faeldon refused to name names, he hinted that one who is most angry at him in Congress has sent him the most requests.

“Look at you. Ikaw ‘yung madaming pinapadala sa aking requests, kaya galit na galit ka ngayon,” he said. (Look at you. You’re the one who sends me a lot of requests, and that’s why you’re angry now.)

When asked if he mentioned these “corrupt” politicians to President Rodrigo Duterte in their emergency meeting on Tuesday, August 1, Faeldon said it was not in his nature to do such a thing.

“I don’t want to humiliate anybody… Hindi ako mahilig magsumbong. (I don’t like to report people.) I appeal to them directly,” he said. “Magalit na kayo sa akin (Get mad at me). Try your best to take me out of here everyday. But as long as I am here, I will continue to say no [to your requests].”

In the same meeting, the President “reiterated his trust and confidence” in the BOC chief and asked him to stay on.

Faeldon said he was given a general order “to cleanse the bureau of anything – corruption, drugs, everything.”

Following the interrogation he received at the House of Representatives on Tuesday, Faeldon said lawmakers failed to ask him the right questions.

He said many of their questions related to the job of employees and not that of the commissioner.

“My job here is to chart the strategic directions of the bureau. Not to supervise. Not to micromanage. Not to do the job of an agent,” Faeldon said.

“What are my plans to put in place permanent reforms to eradicate corruption here? To permanently end smuggling here? To make the bureau more efficient – at par with the practices all over the world? These are the questions I want to be asked.”

Adding to the problem of corruption is the lack of training for the bureau’s employees, according to Faeldon.

“For 115 years, this bureau has never had a training institution… Pagpasok mo (When you begin working here), you have one-hour orientation and you’re in. That’s why the bureau is so corrupt,” he said.

“We are dealing with millions of pesos every day. The temptation is so high, so the character of the employee must be very strong. They have to refuse, they have to reject.”

Faeldon also explained that with only 16% capacity for X-ray inspections in the BOC, there is a higher chance that contraband would get into the country.

Until this capacity for X-ray inspections reaches 100%, he said, corruption would continue in the bureau.

“The smugglers, they know our weaknesses.” – Rappler.com