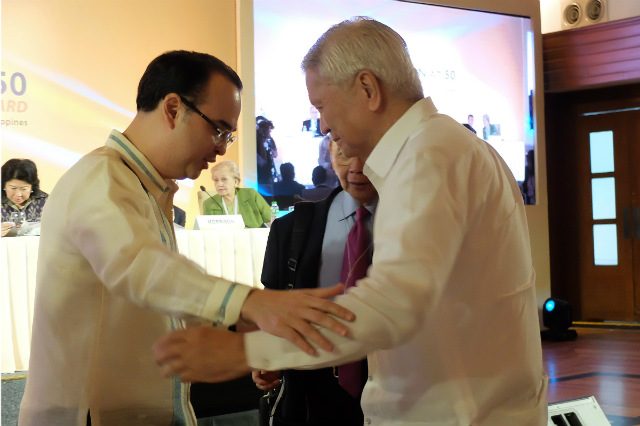 Cayetano spoke at a forum on ASEAN organized by the Stratbase-Albert del Rosario Institute (ADRI) on Friday, August 4. Stratbase-ADRI is named after and chaired by Del Rosario.

In a rare instance, Cayetano addressed Del Rosario in his speech on Friday.

“To those who have worked so hard here to protect our national territory and our sovereignty, just like our former secretary, may I assure you that we may have different strategies, but we have the same objectives, sir,” Cayetano said.

It was under Del Rosario’s leadership of the DFA that the Philippines filed a historic case against China over the West Philippine Sea (South China Sea). The Philippines won this case in July 2016.

In his speech on Friday, Cayetano defended, too, the Duterte administration’s foreign policy, in the face of criticisms.

“Looking at the reaction or non-reaction of some of you here today, I know that sometimes you think the Duterte administration is too naive, and sometimes you would think they’re too paranoid. But we’re somewhere in the middle,” Cayetano said.

“If you’re too naive, of course other countries’ foreign policy and interests will run over you. Sometimes kindness is taken as weakness. But if you’re too paranoid, nothing will get done, and we’re trying to find that middle ground,” he added.

The Stratbase-ADRI was held at the Manila Polo Club while the 50th ASEAN Foreign Ministers’ Meeting and Related Meetings were ongoing at the Philippine International Convention Center.

The ASEAN meetings from August 2 to 8 gather up to 27 foreign ministers from different countries, to discuss regional issues such as the South China Sea dispute and the North Korea tensions. – Rappler.com