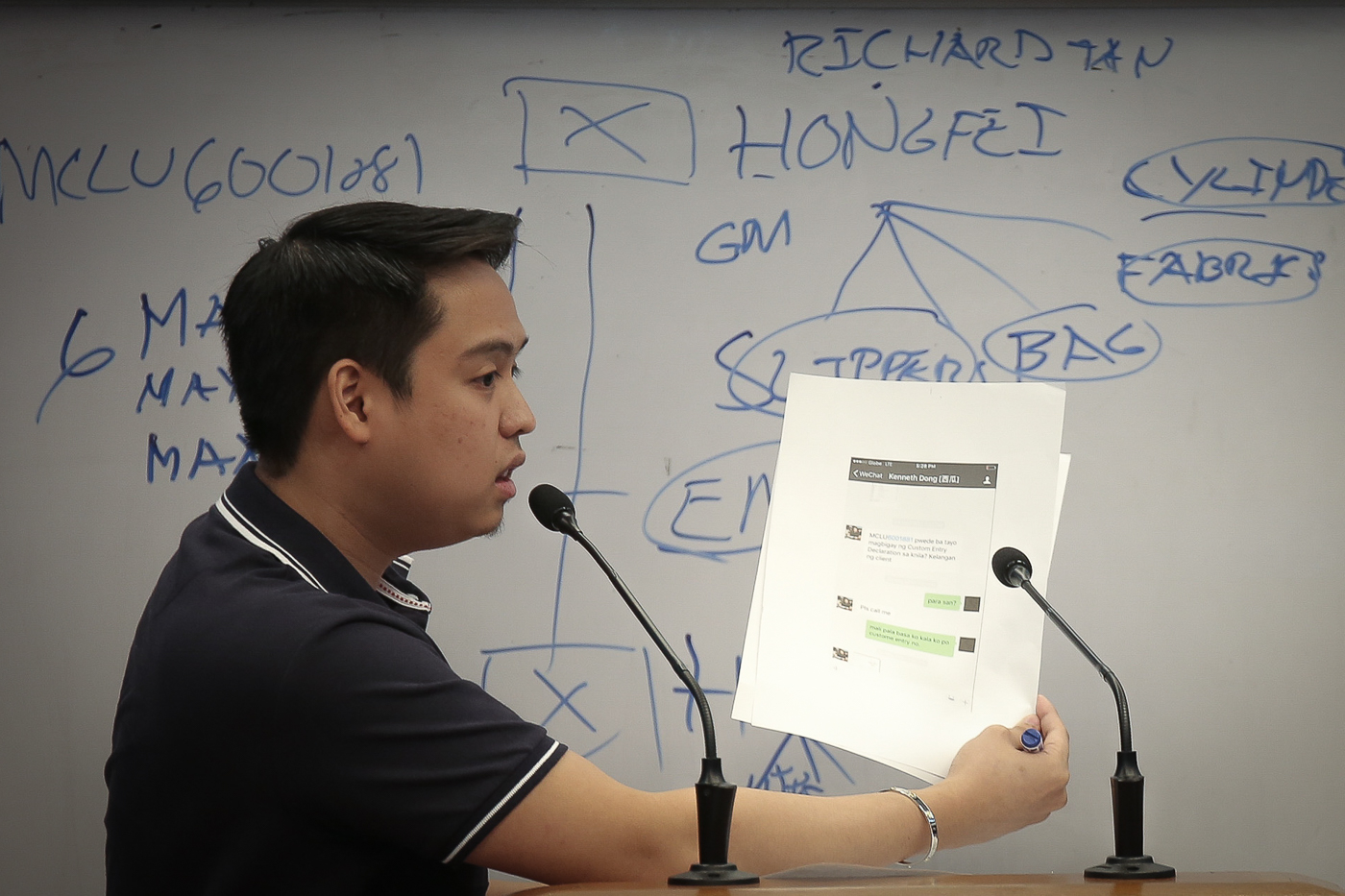 MANILA, Philippines (UPDATED) – Hours after being granted legislative immunity from suit by the House of Representatives, a customs broker pinpointed who are the alleged corrupt Bureau of Customs (BOC) officials at a hearing on Monday, August 7.

Mark Ruben Taguba, a customs broker who is being linked to the smuggling of P6.4 billion worth of illegal drugs from China, was among the resource persons summoned to the hearing conducted by the House committee on dangerous drugs.

Taguba, who had also testified before the Senate, was asked by Capiz 2nd District Representative Fredenil Castro to point to the BOC personalities present at the hearing, and with whom the witness had apparently worked with to make sure shipments would be processed without a hitch.

A visibly nervous Taguba rose from his seat and began walking around the hall, where several key BOC officials were seated. In a hearing broadcast live on television, Taguba identified the following:

He also identified several personalities who were either not at the hearing or whose complete names he did not know:

The customs officials accused of being corrupt each denied Taguba’s allegations during the same hearing.

Maestrecampo, while denying Taguba’s allegations, said he would be stepping down from his post. “I can probably be a rebel but I am not a thief,” a visibly emotional Maestrecampo said.

Maestrecampo is a former mutineer from the Magdalo Group, soldiers who took part in a botched mutiny against the Arroyo administration in 2003. BOC Commissioner Nicanor Faeldon was one of the alleged leaders of the mutiny. (READ: Faeldon asks Duterte to probe P6.4-B shabu shipment from China)

Raval said he had neither met nor spoken to Taguba. He denied that anybody in his office got bribes.

This is not the first time Raval has found himself in the middle of a customs bureau controversy. In 2015, John Sevilla resigned from his post as BOC commissioner because of Raval’s appointment as director of the Enforcement and Security Service.

Sevilla said then that the Palace, during President Benigno Aquino III’s administration, was being pressured by the powerful Iglesia ni Cristo to reappoint Raval even if it went against the bureau’s promotion process.

Sagaral also denied the allegations. “Ngayon lang ako naakusahan ng ganoon,” he said, emphasizing his clean record in the bureau. (It’s only now that I’m being accused of something like this.)

Maronilla, while admitting he had met Taguba in the past, said he did not get money from the broker and neither did he allow any of his staff to do the same. Estrella said the same.

But while he was being questioned by Cebu 3rd District Representative Gwendolyn Garcia, Taguba said he was referring to the officers who had allegedly gotten the bribe money and not the officials themselves.

In an earlier closed-door session at the Senate, Taguba detailed the personalities involved in corruption at the bureau. He did the same during the public hearing at the House of Representatives.

“You are indeed a hero for this country,” said congressman Castro.

Taguba was earlier placed under the protective custody of the Senate. The House wants to do the same.

Both houses of Congress are investigating how billions of pesos in shabu from China made it past the BOC. The illegal drugs were later seized at a Valenzuela City warehouse. – Rappler.com