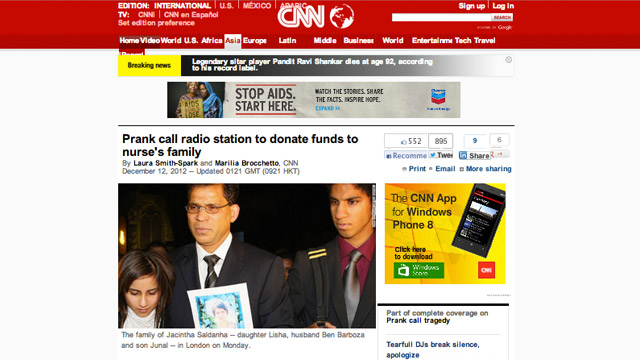 The Australian radio station whose DJs were behind the prank call to a UK hospital where a pregnant Duchess Catherine was confined last week says it will donate no less than $524,000 to the family of the nurse who answered the phone call, after it is believed that nurse killed herself because of the incident. The body of 46-year-old nurse Jacintha Saldanha was found dead outside her living quarters last Thursday, three days after she received the prank call from the DJs pretending to be Queen Elizabeth II and Prince Charles and put it through to the to the nurse in the ward. Public anger ensued over the incident, both DJs have apologized on their radio show. Sydney-based 2DayDM has set up a memorial fund for Saldanha where all advertising proceeds till the end of the year proceed will go into the fund.