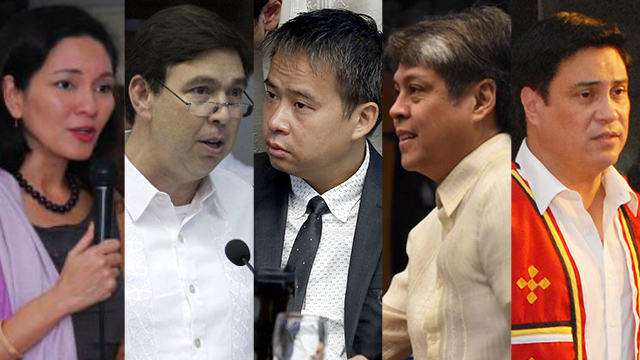 MANILA, Philippines (UPDATED) – At least 5 senators have links to Kenneth Dong, the alleged middleman in the P6.4-billion shipment of shabu from China.

Dong was a campaign donor of Senator Joel Villanueva in the 2016 elections while Senate President Pro-Tempore Ralph Recto as well as senators Risa Hontiveros, Juan Miguel Zubiri, and Francis Pangilinan were his wedding sponsors in 2013.

Dong is the supposed link to Richard Tan, the alleged importer of some 604 kilos of illegal drugs from China to Manila.

All admitted knowing Dong, with Zubiri calling him a “friend.” But all denied knowing his involvement in illegal drugs.

Villanueva said he met Dong at an international agriculture and tourism expo on June 30, 2011, which he attended as then director general of the Technical Education and Skills Development Authority (TESDA). But since then, he said they had no “substantial meeting or interaction.”

Villanueva admitted getting campaign contributions from the alleged middleman.

“During the campaign, he was one of the businessmen who contributed when I was doing fundraising activities. I never had a personal interaction with Mr Dong. My campaign manager was the one who received all contributions. My conscience is clear. I barely know Mr Dong,” Villanueva said in a text message.

Aside from Villanueva, Hontiveros also received campaign money from Dong. She said she first met Dong in 2012 as a businessman selling industrial weighing scales. In 2013, she said Dong helped in relief operations for Super Typhoon Yolanda (Haiyan).

(My campaign team had a vetting process for those people introducing themselves and wanting to help. As far as my campaign team knew then, and as far as we know now, he is a legitimate businessman.)

Hontiveros, Zubiri, Recto, and Pangilinan were also wedding sponsors of Dong in 2013.

Zubiri admitted being friends with Dong but said he has not spoken with the latter since December 2016.

“Haven’t spoken to him since last Christmas close to 8 months ago and I’m just one of several senators, politicians, and celebrities who were ninong at his wedding. I consider him a friend but I don’t know what his dealings are and his business details except for his ownership of Asuki industrial weighing scales,” Zubiri said.

Pangilinan said Dong did not contribute to his campaign but confirmed being one of the latter’s wedding sponsors.

“No he wasn’t a campaign donor. I met Mr Kenneth Dong when I was chairman of the Senate committee on agriculture and food during my second term as senator. I was the keynote speaker during the international agri tourism summit upon his invitation. In November 2013, I became one of the sponsors during his wedding,” Pangilinan said.

While Recto was one of those invited to be a sponsor, he said he did not attend the wedding. Recto said he first knew Dong during the 2010 campaign.

“I met him in 2010 during the campaign. He was introduced to me by a staff of another senator. I know him to be a young entrepreneur selling industrial weighing scales. I may have been invited to be a wedding sponsor but did not attend. I know him like I know most of you in media. I don’t know more than what I have said,” Recto said.

Hontiveros said they were all surprised to find out Dong’s alleged illegal acts.

Despite their links to the alleged middleman, all vowed fairness in investigating Dong.

“No one is above the law, no one should be treated differently in this drug probe. Full force of the law kahit sino pa boss (no matter who your boss is),” Villanueva said.

“We will not condone wrongdoing. We believe those wrongly accused should be absolved and those guilty be held to account regardless of who they are,” Pangilinan said.

“If he broke the law then without fear or favor, friend or not, the law must be implemented and those that are guilty should be arrested. There should be zero tolerance for drugs,” Zubiri said.

“The Senate hearing gives him an opportunity to explain his role. My advice is just to tell the truth,” Recto said. – Rappler.com