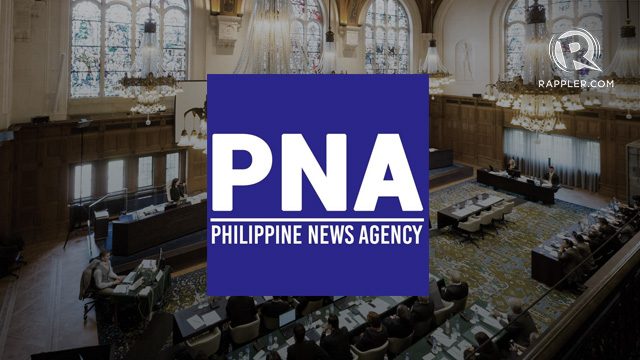 MANILA, Philippines – A case of bad judgment or just an oversight?

The Philippines’ own state-run news agency posted an article that calls the historic ruling won by the country against China an “ill-founded award.”

The article, which was sourced from Xinhua, China’s state-run news agency, is titled “Time to turn a new leaf on South China Sea issue.”

The sentence that downplays the arbitration award reads:

“More than one year after an ill-founded award at a South China Sea arbitration unilaterally delivered by an ad hoc tribunal in The Hague, the situation in the South China Sea has stabilized and improved thanks to the wisdom and sincerity of China and the parties concerned.” It is also not until the end of the article that the PNA identifies it as having come from Xinhua, and not written by its own staff.

A PNA post that appears to question the validity of a historic ruling won by its own government goes against the country’s foreign policy stance. (READ: Highlights of ruling: China violated Philippine sovereign rights)

Even with President Rodrigo Duterte’s friendship with China, his administration has still promised to uphold the ruling and defend the country’s maritime territory.

Rappler asked Presidential Communications Secretary Martin Andanar and Assistant Secretary Kris Ablan how such an article could have been posted on the PNA website.

They have not replied as of writing. But within an hour after the officials were contacted, the PNA article was taken down. The PNA is one of the state-run media agencies under the Presidential Communications Operations Office (PCOO).

The posting of the Xinhua commentary puts into question the wisdom of posting content from Chinese state-run agencies.

For instance, when the Hague ruling was first announced in July 2016, Chinese state media went all out in their offensive, calling the ruling “null and void” and the Permanent Court of Arbitration a “law-abusing” tribunal.

Yet during Duterte’s state visit to Beijing in October 2016, the PCOO and China’s State Council Information Office signed a memorandum of agreement for cooperation as well as information and content-sharing between their media agencies.

The PNA has used articles from other state-run news agencies before. It constantly posts straight news stories from Xinhua and Russian media outlets like Sputnik and TASS Russian News Agency.

Byron Villegas, a concerned citizen who spotted the “ill-founded award” tag in the PNA-posted article, said he was saddened that the PNA had to “copy and paste” the opinion from Xinhua.

(It’s like we are promoting the position of China… Even if the PNA and Xinhua are partners, the PNA shouldn’t post those kinds of articles.)

The posting of the Xinhua article comes at a time when the Duterte administration is accused of going soft on China and its activities in the West Philippine Sea. (READ: FAST FACTS: South China Sea dispute)

Duterte has so far only promised to bring up the Hague ruling at a “proper time,” especially given a supposed war threat from Chinese President Xi Jinping.

On July 12, 2016, the Permanent Court of Arbitration in The Hague, Netherlands concluded that there was no legal basis for China to claim sea areas within its “9-dash line.”

The ruling was won after a 3-year process initiated by the Philippines under the administration of Benigno Aquino III. The proceedings were ignored by Beijing. – Rappler.com