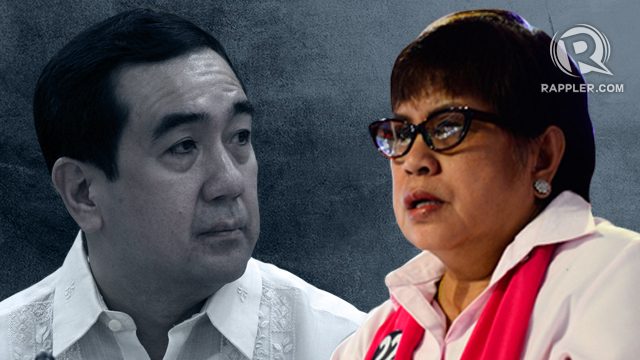 Facebook Twitter Copy URL
Copied
Kapunan tells Andy Bautista: 'The problem with lies is, lies not only quarrel with the truth. They quarrel among themselves.'

Kapunan clarified she had been rehired only on Tuesday, August 8. Patricia first hired her in November 2016 but disengaged her services in May.

Lawyer Martin Loon primarily handles the legal cases of Patricia against Chairman Bautista, including settlement talks and the affidavit alleging corruption submitted to the National Bureau of Investigation or NBI.

But since news broke on Monday, Chairman Bautista has been mentioning Kapunan non-stop. He has accused the lawyer of orchestrating the “ransacking” of his safe to get the documents which would come to be the basis of the NBI-led investigation into accusations that the Comelec Chief had amassed ill-gotten wealth, including supposed daily bank deposits during election year 2016.

Kapunan said Patricia came to her in November, already in possession of the controversial documents supposedly showing her husband’s deposits, properties, investments and commission sheets amounting to nearly P1 billion.

“November of last year (I came into the picture), she discovered these documents in October of last year. She was referred by a close friend to me,” Kapunan said.

This is contrary to Chairman Bautista’s story that it was the lawyer’s idea for Patricia to get the documents.

Bautista told CNN Philippines on Monday: “When I was on my way back (from the US), November 2016, she texted my sister that she had retained a lawyer, Lorna Kapunan, that she was advising me not to stay in our house, that she would send me clothes for me to use in my sister’s house.”

Bautista added: “I came home to my house and and when we came up to our floor there were two armed goons guarding it, and when we asked where did you come from, they said they were sent by Attorney Kapunan… My sister and I came in, I saw that my locked filing cabinets were open, they were ransacked…And I asked her, did you get advice from your counsel before you did this? She said it was counsel who recommended that I do this.”

Bautista filed robbery and extortion complaints against Patricia. But Kapunan said Patricia could not be charged for stealing something that is hers.

In an earlier text message to Rappler, Kapunan said, “Chairman Andy required Patricia to terminate me as lawyer as condition to the settlement.”

Patricia, for her part, told reporters that she let go of Kapunan in May because of the lawyer’s “personal history” with Chairman Bautista.

Kapunan said this is rooted in a complaint that she and a group from the Philippine Communications Satellite (Philcomsat) filed against Bautista for inaction on corruption claims. This was when Chairman Bautista headed the Presidential Commission on Good Government or PCGG from 2010 to 2015.

This issue was again raised by Bautista in a report on ABS-CBN News on Tuesday.

“He’s saying I don’t like him,” Kapunan said, and then added, “but really, I’m indifferent to him.”

(On our side, we have documents, on his side they’re all allegations. We know that allegation is not proof. If he is denying, show us the documents. If he’s saying there’s a politician involved here then he can go and investigate. He’s chairman of Comelec, he can investigate.)

Why take the case?

“No law firm she approached was brave enough to handle her until she came to me (in November),” Kapunan said of Patricia Bautista.

Kapunan is not a stranger to highly-controversial cases, even ones concerning government officials. The latest of these involved defending alleged pork barrel scam mastermind Janet Lim Napoles in her serious illegal detention case. It was also Kapunan who arranged for Napoles to surrender to former president Benigno “Noynoy” Aquino in Malacañang in 2013.

Kapunan said she dropped Napoles she realized “she was telling a lie.” Kapunan clarified the lie does not refer to the serious illegal detention case, for which Napoles has been acquitted by the Court of Appeals.

Kapunan said she does not have to believe in Patricia Bautista, she only has to see the documents. “The documents tell the truth themselves,” the lawyer said.

Kapunan claims that when Chairman Bautista discovered that Patricia had taken the documents in November 2016, they were served a letter by the Divina Law firm asking them to return the documents.

One of the Divina Law Firm’s partners is Nilo Divina, Dean of the University of Sto Tomas (UST) Faculty of Civil Law, and a close friend of Chairman Bautista. Divina has not responded to Rappler as of posting time when asked to confirm Kapunan’s claim.

Divina has more important questions to answer in the meantime. According to Patricia’s affidavit submitted to the National Bureau of Investigation (NBI), her husband received commissions from the Divina Law Firm.

“It would, thus, appear that Andy secured the services of Divina Law, Nilo’s law firm, in order to profit from his position in the Comelec,” Patricia said in her affidavit.

In a short response to Rappler on Monday, Divina said they are “preparing legal actions.”

A Philippine Star report on Tuesday quoted Divina as saying: “We will file an action for libel against Tish Bautista and any and all persons who aided, abetted, assisted and conspired with her in weaving false stories against the firm.” (READ: Who’s who in Andy vs Tish Bautista saga?)

Kapunan said that if necessary, Patricia’s legal team is ready to explore whether they could file their own libel case against her husband.

Bautista had earlier said his wife’s lawyers “embellished, doctored, or fabricated” many of these documents.

“Inconsistent ‘yan sa sinasabi niya na ‘yung documents na ‘yun ay hindi kanya, na they belong to the mother and to the sister,” Kapunan said. (That is inconsistent with his statements that the documents don’t belong to him, but to his mother and sister.)

She added: “The problem with lies is, lies not only quarrel with the truth. They quarrel among themselves.” – Rappler.com