Except for killings, all crimes drop in Duterte’s 1st year 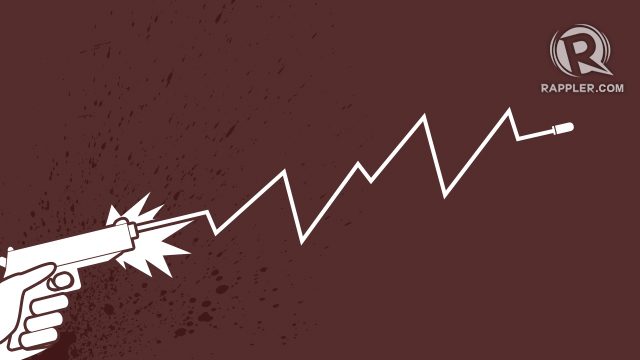 While all crimes dropped by 9.8%, killings rose by 22.75% during Duterte’s first year in office, according to data from the PNP. Non-index crimes refer to violations of special laws, and ordinances that vary as one crosses local government territories.

Index crimes are misdeeds against persons such as murder, homicide, physical injury and rape; and against property such as robbery, theft, and carnapping. Physical injuries include mutilation, maltreatment, poisoning, also slight and serious injuries that are judged based on the effect on the routine of the assaulted. These incidents lessened by 17.4%. The administration also managed to decrease the incidents of the sexual crime in a year by 714, or around 7%. This, despite trivializing remarks frequently heard in the President’s speeches.

The sharpest declines, however, are in property crimes, as all dropped at least by a third from before. 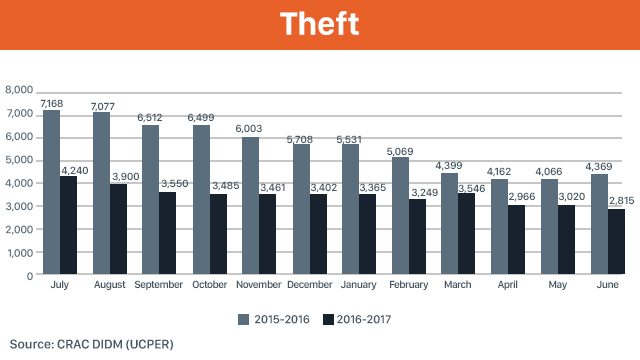 “The reduction in the focus and prevalent crimes resulted in the effectiveness of Project Double Barrel as a strategy not only to eliminate the illegal drug trade but to reduce crime across the nation,” Dela Rosa said on Wednesday, August 9.

It comes as no surprise as the administration considers the war on drugs and the war on criminality as two sides of the same coin. (READ: Duterte’s marching orders for war on drugs, crime, corruption)

A Social Weather Stations survey showed, however, that while people grow confident of their protection given that the project delivers, they worry about the spate of killings that come with it. 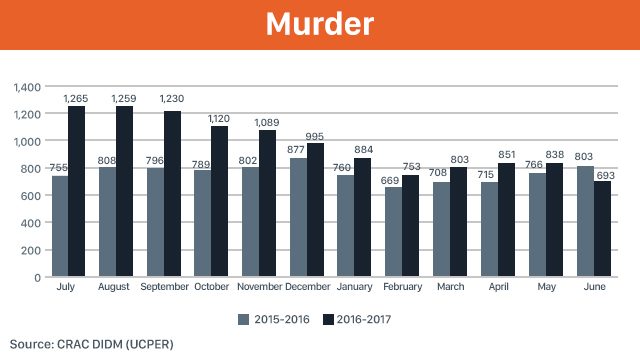 The administration has downplayed the killings with Dela Rosa branding the dead as guilty of crimes, given that after encounters end, police later find illegal drugs.

“Before, when you’re talking about murder, it’s people who are innocent. They are victims of drug-crazed people who committed crimes. Now most of those killed are drug personalities. That’s the very big difference,” said Dela Rosa said in December 2016.

He added: “Those are still people and that’s still murder that needs to be investigated. But people should appreciate the difference between the innocent and the drug personalities.” The President has taken it further.

Duterte, on multiple occasions, encouraged the killing of drug suspects.

Their comments come while the criminal suspects have not been given a court trial, much to the outcry of human rights advocates, inside and outside the government.

Criminologist Raymund Narag, in his Rappler piece, described the approach of the President to quell criminality as being a match of the philosophies of “retribution” and “deterrence.”

This means “severe, swift, and certain” punishment for every wrong done, which Duterte has repeatedly promised through his powerfully-worded and off-the-script speeches, and delivered on the ground by men with guns, with or without a blue uniform.

It is a response that has reeled in the majority’s appreciation, having experienced a sluggish justice system which, according to Narag, had unfairly favored the elite.

Further, Duterte has wagered his very presidency and his life on his promises, captivating the crowd and discouraging criminals more.

Now on their second year, Duterte and Dela Rosa both vowed that their campaign against drugs and criminality will remain unrelenting. – Rappler.com