Taguiwalo ‘represents all of us, all our dreams, all our aspirations’ – Recto 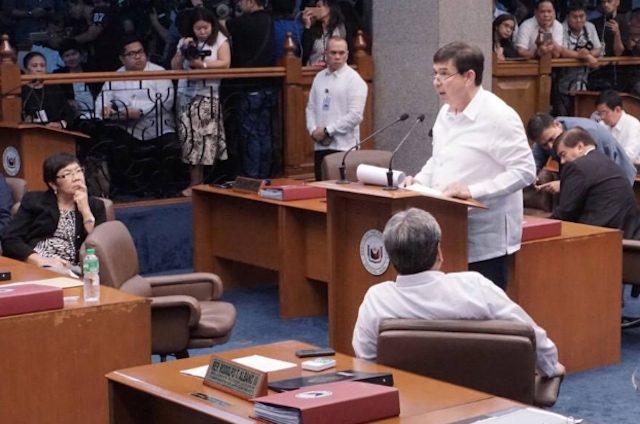 MANILA, Philippines – The Commission on Appointments on Wednesday, August 16, rejected the appointment of Social Welfare Secretary Judy Taguiwalo, based on the recommendation of a CA panel that deemed her unfit for the position.

Some senators manifested their vote in favor of Taguiwalo’s appointment after the CA plenary adopted the recommendation of the CA committee on labor and social welfare chaired by Davao Oriental 2nd District Representative Joel Almario.

Senate President Pro Tempore Ralph Recto manifested his vote and read the following prepared speech endorsing the confirmation of Taguiwalo. He was scheduled to deliver it if the confirmation hearings on Taguiwalo had advanced to CA plenary for voting.

I have been told that the nominee is a fan of my grandfather, and of my wife. That she can recite passages from Don Claro’s writings. And hugot lines from the movies of Vi.

So on that score alone, she gets my vote.

But if my grandfather were alive today, he, Vi and the nominee, would make a mutual admiration club.

Don Claro would only have the deepest esteem for someone who did not only agree with his causes, but spent a lifetime fighting for it.

And Vi would find in her, as she does, a real life character who looms larger than Sister Stella L, and who has more guts and grit than all the strong women she had played on the silver screen.

The first pages of the nominee’s CV describe an intellectual at home in the academia.

Retired professor of UP. Head of its Center for Women Studies. Director of Research and Extension for Development Office. Faculty Regent.

In a school where merit is rewarded, she would not have been able to assume these posts without the academic degrees that validate a first-rate mind:

Indeed, her CV catalogues, in fine print, the research papers, articles, books she had written.

But what is not there are her other engagements in her storied life which I believe makes her qualifications more sterling – and prove without doubt her fitness to perform the duties of the office she holds.

She is also an alumnae of 3 Martial Law prisons, went underground, and joined the resistance – only because legal pathways for change were blocked, and peaceful avenues to protest were closed.

To those who would see this as impediment to a Cabinet post, here’s my rebuttal: Political imprisonment is no bar to public office and neither is the taking up of arms when conditions warrant.

On the contrary – these are experiences we should look for in scouting for talent because they are the toughest “stress tests” one can endure.

I don’t have to remind you that in our pantheon of heroes, those who were jailed for their beliefs occupy an honored place. Warriors, especially women, are revered, from Gabriela Silang to Tandang Sora.

I think, Mr President, that it is her work during the “unsalaried phase” of her checkered career which is her biggest qualification in holding the DSWD portfolio.

It immersed her into the grinding poverty that continues to slave our people. It allowed her to closely see how the denial of basic social services drives people, first, to despair, and then, defiance.

If the ideal DSWD secretary is one who possesses competence, compassion and commitment, then it can be said that UP gave her the first, her activism gave her the second, and her underground years gave her the third.

We can never ask for a package as complete as her. She had been serving DWSD’s clientele long before Digong thought of running for mayor.

So if we would like to know her views about poverty, we can leaf through the forest of newsprint that contains her writings.

But if we would like to know if she really cares about the poor, then her stints in factories, in farms and in forests are enough to dispel any doubt.

The nominee should not be dismissed as one of the token Leftists in the Cabinet. She was not put there as a memento to prove Digong’s Big Tent approach in forming a government.

Rather, I believe that she holds the post by virtue of her ability, and not by her affiliation.

She is not there to represent one color in Digong’s rainbow Cabinet. She is there to serve all the colors in the tapestry of our democracy.

She represents all of us, all our dreams, all our aspirations for our nation, our people, and our children. She personifies that elusive political ideal that persons of different persuasions can come together for the common good.

If she is an ideologue, then the ideology she subscribes to is the same one we believe in, and that ideology is to serve the people.

I am seconding her confirmation because she brings a fresh perspective in the DSWD – and that is to treat not poverty’s symptoms but its roots, for the poor need more than relief, but a release from the social shackles that prevent them from bettering their lives.

It is, therefore, my pleasure to endorse the confirmation of the appointment of Doctor, Professor Judy M. Taguiwalo, or Ka Judy, as Secretary of Social Welfare and Development.