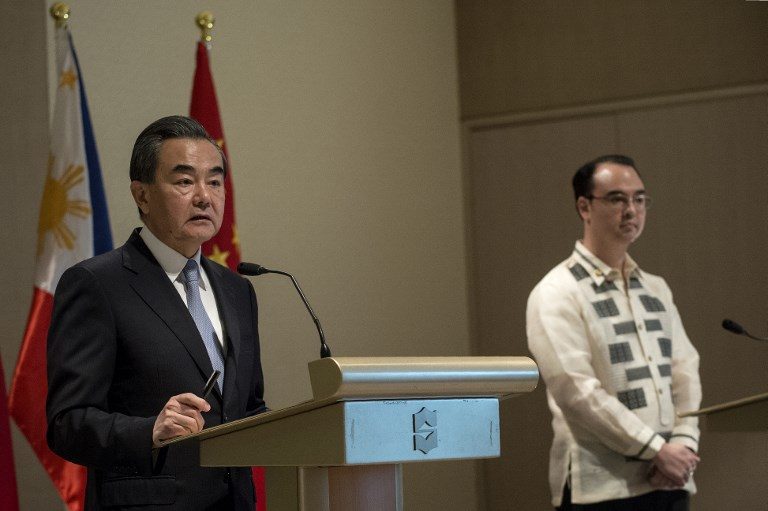 “It is good we have people like [Representative Gary] Alejano to remind us, who monitors the situation, di ba? But, there’s a thin line between informing us and stirring up the situation,” said Cayetano in a press conference on Wednesday, ahead of a closed door briefing with lawmakers on the West Philippine Sea.

Alejano, who represents the party list Magdalo in the House of Representatives, had revealed during the Defense Department’s budget hearing on August 14 that at least 5 Chinese ships were spotted near Pag-asa island, home to roughly 100 Filipinos.

The lawmaker said the activities may be part of China’s “sinister plan” to occupy sandbars just west of Pag-asa Island. Chinese ships had also apparently blocked a Bureau of Fisheries and Aquatic Resources (BFAR) ship in the area, said Alejano, citing information from contacts in the military.

“The presence of ships alone does not mean anything. I mean, for example, let me ask Cong. Alejano, why were not concerned about the US doing freedom of navigation at ang lalaki ng ships nila (and their ships are very big)? Why? Kasi (Because) they’re our allies. If we keep looking at China as the enemy, the movements nila, masyado tayong nagre-react (we will react too harshly),” added Cayetano, who was President Rodrigo Duterte’s vice presidential candidate during the 2016 elections.

Duterte is pushing for an “independent” foreign policy. Thus far, it has meant distancing the Philippines from its traditional ally, the United States. It has also meant forging closer ties to countries like China and Russia.

Alejano, a member of the House opposition bloc, seemed undeterred by the Cabinet official’s pronouncements.

“I call on our government to break their silence with regard the repeated incursions perpetuated by China. Specifically, I urge the government to take the massing up of Chinese forces and their militias North of Pag-Asa Island seriously. I call on the Philippine government to call the attention of China and order their ships away from Pag-asa Island and file appropriate diplomatic protest against China,” said Alejano, a former Marine oficer, during a privilege speech on August 16.

In contrast, Cayetano saw no reason for alarm, while insisting that he could neither confirm nor deny Alejano’s claims. “There is no situation there that is a cause of lowering of trust among the claimants at this point in time,” added Cayetano.

The foreign secretary on August 15 and 16 held closed door briefings for two House committees on the West Philippine Sea and the country’s foreign policy ahead of his department’s budget deliberations. Cayetano told media he had gotten permission from the Palace to share with lawmakers sensitive information. – Rappler.com