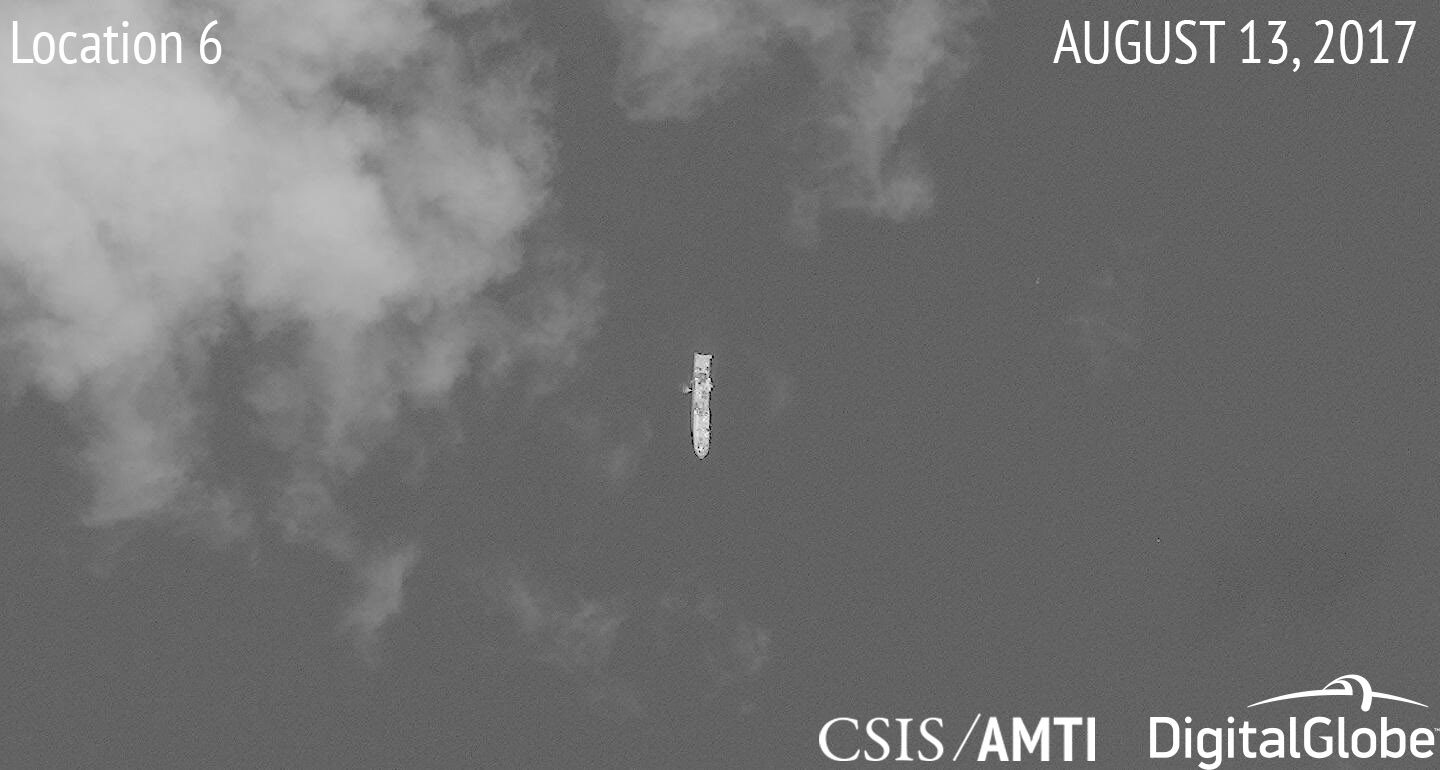 MANILA, Philippines – “The presence of ships alone does not mean anything.”

Philippine Foreign Secretary Alan Peter Cayetano made this statement on Wednesday, August 16, as he downplayed reports that 5 Chinese ships were spotted near Pag-asa Island in the West Philippine Sea (South China Sea).

Cayetano, however, spoke too soon.

Photos released by a Washington-based think tank on Thursday, August 17, showed at least two Chinese ships that “appear to be actively fishing” near Pag-asa Island.

The images came from the Asia Maritime Transparency Initiative (AMTI) of the Center for Strategic and International Studies (CSIS), a 55-year-old independent think tank based in the US.

In its latest report, AMTI also said at least 9 Chinese fishing ships were seen near Pag-asa Island on August 13.

In its latest report, the AMTI said that “there were 9 Chinese fishing ships and two naval/law enforcement vessels visible” near Pag-asa Island on August 13, “with others possibly under cloud cover.”

“It is impossible to know if any of those ships might be affiliated with the maritime militia, but at least two appear to be actively fishing (locations 6 and 8), with their nets visibly in the water,” the AMTI said. 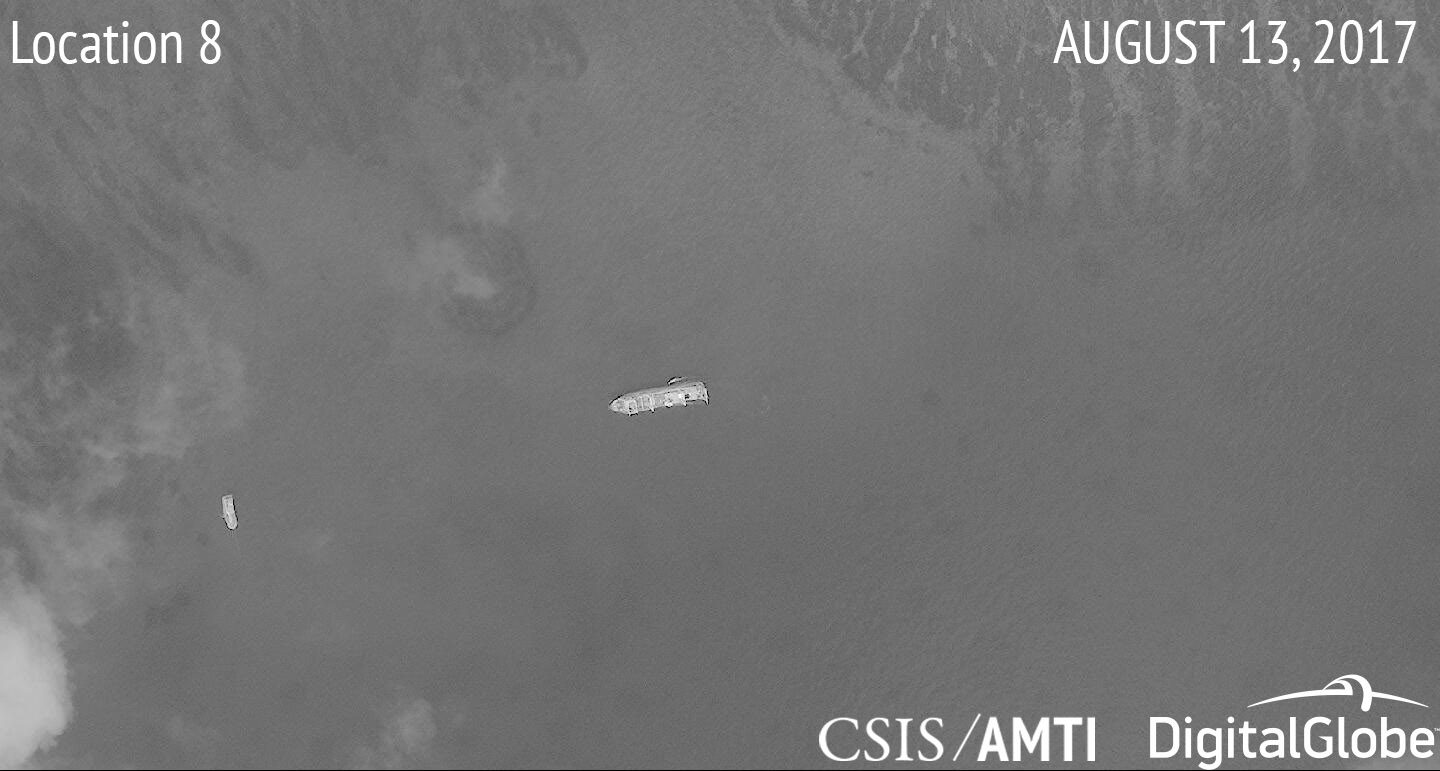 “There also appears to be a Philippine fishing boat docked at the nearest of the unoccupied sandbars (location 12), possibly sent out from Thitu to investigate the Chinese presence,” the AMTI added.

The think tank said the fishing vessels, in locations 3 to 11, “are all located between one and 5 nautical miles” from Pag-asa Island.

Meanwhile, the nearest military/law enforcement ship is located 3.6 nautical miles from the island. The AMTI pointed out that “ownership of the territorial waters in which these ships are operating is still legally disputed.”

Still, the think tank said, “Setting aside whether Chinese ships legally can fish within one nautical mile of Thitu Island, there is no doubt that doing so is highly provocative and runs counter to the narrative of a stable mutually-beneficial new status quo that Beijing has sought to project.”

“The fact that law enforcement and naval vessels accompanied the fishermen makes it clear that this was not done without Chinese authorities being aware. At best, they permitted their operation. At worst, they escorted and guarded them,” the independent think tank said.

“The number and rapid coordination of naval and coast guard ships suggests that this was purposely organized in advance and was not just an ad hoc response by government vessels that happened to be in the area,” it added.

The AMTI said that “one possible explanation for the flotilla’s sudden and provocative appearance is that Beijing wanted to dissuade Manila from planned construction” on Pag-asa Island.

“Those upgrades have been delayed, reportedly due to inclement weather, but Lorenzana has made clear that they remain in the pipeline. In light of this week’s events, Manila might feel that those upgrades are even more urgent,” the AMTI said.

Cayetano, however, said he is not alarmed at the presence of Chinese ships near Pag-asa Island.

“There are reasons for the presence of certain vessels, but the situation in the area is very stable,” Cayetano said on Wednesday.

Earlier, Cayetano also claimed that China was no longer conducting reclamation activities in the South China Sea. He was echoing Chinese Foreign Minister Wang Yi who said China stopped its island-building activities in 2015

Eventually, the AMTI released photos refuting claims by both Wang and Cayetano. – Rappler.com