Duterte: If police murdered Kian delos Santos, they will ‘rot in jail’ 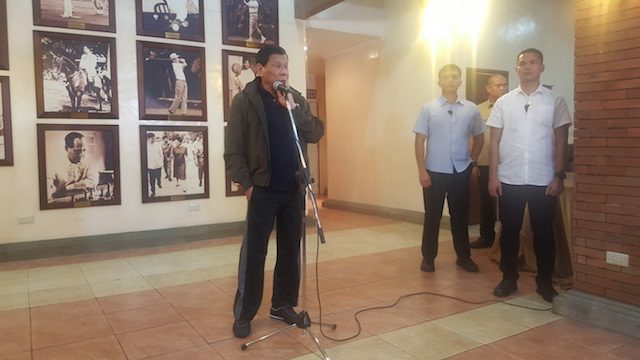 Duterte said this during an interview with media on Monday night, August 21, at the Malacañang Golf Club.

“I saw the tape on TV and I agree that there should be an investigation. Should the investigation point to liabilities by one, two, or all, there will be a prosecution and they have to go to jail if convicted,” said Duterte.

The President said the CCTV footage of the 17-year-old student being dragged by police to the alley where he was shot convinced him that this was not the usual case of “nanlaban” (a suspect who fought back) as alleged by police.

Duterte even said that right after watching the tape, he called Philippine National Police (PNP) chief Director General Ronald dela Rosa and said, “Catch them, put them in jail,” referring to the policemen responsible for Delos Santos’ death.

The President also claimed he was beaten to the punch by Justice Secretary Vitaliano Aguirre II, who announced a probe by the National Bureau of Investigation (NBI).

Asked if there are indeed corrupt policemen implementing his drug war, the President said “it cannot be denied.”

Despite what he knows about Delos Santos’ death (the President did not know the slain teenager’s name), Duterte said he decided not to attend the boy’s wake, fearing it would validate claims that the police involved indeed murdered Delos Santos.

“It is pregnant with so many suppositions. One is that, ‘Look, Duterte went there maybe to apologize because the murder really happened,'” he said.

Doing so would be a failure of his “duty” to the police, who work under him.

“I cannot do that because the organization sa PNP is under me. I would be the last person to condemn them without a valid investigation,” he said.

He promised not to interfere in the probe of the case. Both the NBI and Commission on Human Rights are conducting investigations.

“That I can assure you, that there will be no luto-luto diyan sa ano (cooking the books) because I really do not interfere,” said Duterte.

Delos Santos was killed last August 16 in an anti-drug raid in Caloocan City, one of dozens slain in police operations last week.

His death has sparked calls for justice, with various groups staging a rally on Monday to demand an end to the killings in the drug war. – Rappler.com