Aug 22, 2017 10:40 AM PHT
Bea Cupin
Facebook Twitter Copy URL
Copied
A year ago, at least two House resolutions were filed, seeking an inquiry into extrajudicial killings linked to the drug war. There hasn't been significant progress. 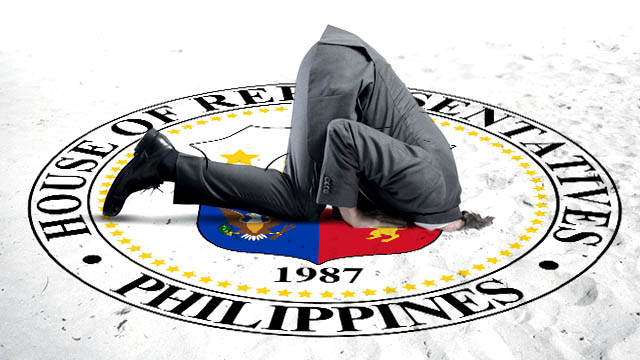 MANILA, Philippines – Members of the Senate majority bloc earlier adopted a resolution calling for a probe into deaths linked to President Rodrigo Duterte’s drug war, but their counterparts in the House of Representatives have yet to make any similar move.

It’s a “silence” that members of the House opposition bloc have criticized, particularly amid backlash following the death of a 17-year-old student during a drug raid. Kian delos Santos of Caloocan City, police claim, was a drug courier who fought back during the operation. CCTV footage and witnesses’ testimonies, however, indicate otherwise.

“Nakakabahala ang katahimikan ng Mababang Kapulungan (The silence of the House of Representatives is disturbing),” said Ifugao Representative Teddy Baguilat Jr, days after Delos Santos was killed in a dark alley on August 16.

Baguilat, a member of the House opposition bloc, called on his colleagues to hold a legislative probe into the spate of drug-related deaths, including that of Delos Santos.

At the same time, the lawmaker was quick to point out that “based on experience… the House is allergic to probe human rights violations or those politically damaging to the administration.”

The outcry over apparent summary executions in the name of the drug war – particularly those allegedly committed by police – is not new in the House of Representatives.

In the 17th Congress, there are at least two pending resolutions calling for a legislative probe into these incidents.

One of the first filed was House Resolution 242, asking the House justice committee to look into “the steep upsurge in the extra-legal killings and arbitrary or summary executions in the country.”

Bag-ao and Bordado are both Liberal Party (LP) members allied with the majority. Villarin, meanwhile, is a member of the opposition bloc.

The resolution was referred to the House rules committee on August 24, 2016. No progress has been made since then.

Days later, the Makabayan bloc filed House Resolution 259, which urges the House to “oppose the use of extrajudicial killings by law enforcement agencies” and calls for an investigation into these killings.

The resolution was also referred to the House rules committee, on August 30, 2016. There has been no further action since then.

There is also a resolution from a member of the majority that highlights “random killings” but does not call for a legislative inquiry.

Although most senators are also allied with the ruling Partido Demokratiko Pilipino-Lakas ng Bayan (PDP-Laban), the Senate conducted several hearings on killings linked to the war on drugs. Senator Leila de Lima, then head of the Senate justice committee, launched an inquiry into summary executions being blamed on police.

The hearings included testimonies from families of those slain during the drug war. PNP chief Ronald dela Rosa sacked several Antipolo police after hearing the testimony of one family.

De Lima’s probe then went on to discuss Duterte’s alleged links to the so-called Davao Death Squad. Edgar Matobato, a self-confessed hitman, testified before the Senate. Several Davao policemen – alleged members of the infamous hit squad – were also called to the Senate.

But toward the end, De Lima was ousted as chairperson of the Senate justice committee. Senator Richard Gordon, who took over from De Lima, later concluded that the summary killings were not linked to either Duterte or the state. Gordon is now among the Senate majority members calling for a probe.

House members who have been vocal against Duterte’s war on drugs are expected to raise the issue once again during the plenary session on Tuesday, August 22.

The administration’s response to the outcry over Delos Santos’ death has been mixed. Some police officials, including the Northern Police District (NPD) director and the PNP chief, have pointed out that the teenager was supposedly a drug courier even if his name was not included in the dreaded barangay drug lists.

Duterte himself, who viewed the CCTV footage, has questioned the police’s claim that Delos Santos fought back. The cops, said the President, should “rot in jail” if proven they murdered Delos Santos.

The 17-year-old died of 3 gunshot wounds – two in the head, and one at the back of his body. – Rappler.com