Taguiwalo: I’m sad the President did not keep his faith in me 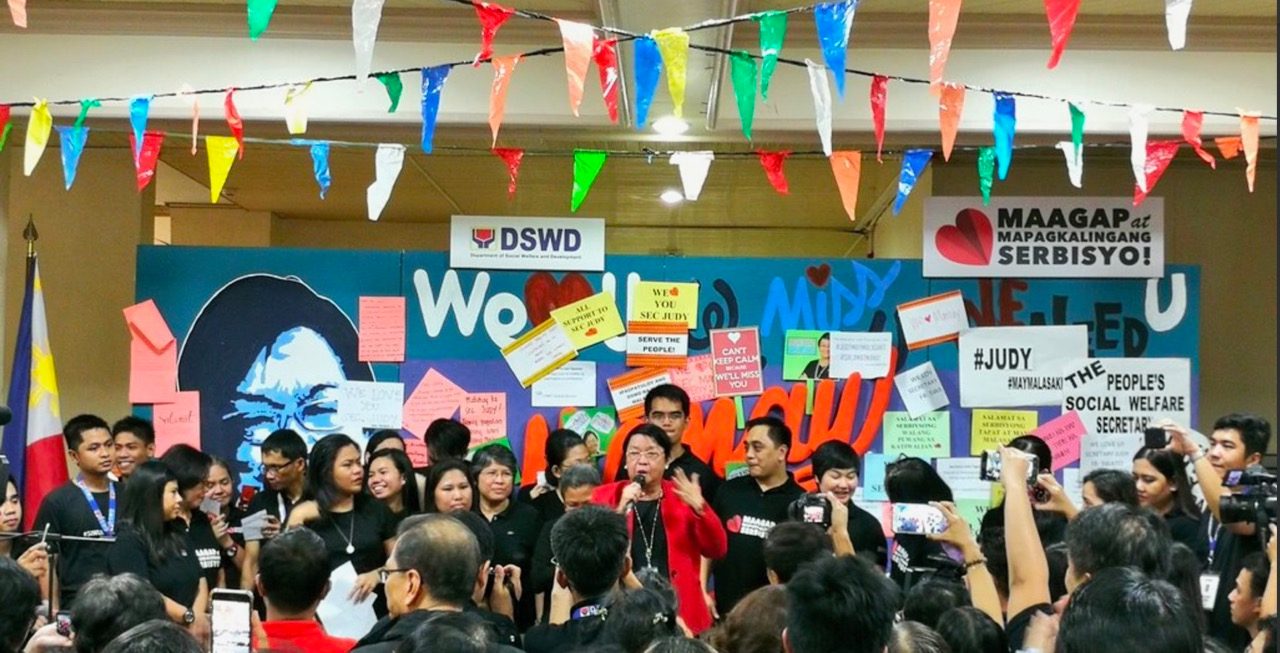 Facebook Twitter Copy URL
Copied
The outgoing social welfare secretary, however, thanks President Rodrigo Duterte for giving her the chance to serve the people

MANILA, Philippines – “Mr President, I keep [my] faith with you. I am just sad because I don’t think you kept your faith in me until the end.”

As she was giving her farewell speech before employees of the Department of Social Welfare and Development (DSWD) on Tuesday, August 22, outgoing secretary Judy Taguiwalo turned emotional when she reached this part of her talk.

“Still, thank you for allowing me to serve the Filipino people as a member of your Cabinet; for showing the Filipino people that the Left is capable of serving genuinely with compassion and no corruption,” she continued in a mix of English and Filipino.

“I keep my faith with President Duterte,” she stressed while she asked the President to back the confirmation of Agrarian Reform Secretary Rafael Mariano. Like Taguiwalo, Mariano is also a nominee of the Left to the Cabinet.

In a Rappler Talk interview on August 17 – a day after the Commission on Appointments rejected her appointment as DSWD secretary – Taguiwalo said she tried to set up a meeting with Duterte before the hearing. The President, however, refused to meet with her. (WATCH: Rappler Talk with ‘People’s Social Welfare Secretary’ Judy Taguiwalo)

Duterte, on the other hand, said he regretted Taguiwalo leaving her post.

Duterte explained that he did not want to interfere with the CA’s procedure since it was part of the government’s checks and balances.

“We can’t do anything if they reject. I do not want to attribute or impute something, motive. It’s a discretion and they voted secret,” he said.

Duterte has not yet named a permanent replacement for Taguiwalo. He said he was considering a female senator and some choices from the private sector.

Over the weekend, Malacañang announced the appointment of DSWD Undersecretary Emmanuel Leyco as officer-in-charge (OIC) of the department. Leyco used to be a professor of public policy at the Asian Institute of Management prior to joining the DSWD.

Leyco said he was called to the President’s office after the CA decision.

Asked about Duterte’s directive, the incoming OIC said: “Ang sabi sa akin, mag-OIC at siguraduhin na ‘di maantala at hindi mai-interrupt ang operasyon ng department.” (What the President told me was that I would be OIC and that I must ensure that the operations of the department would not be interrupted.)

He said the President did not say how long he would lead the agency. – Rappler.com