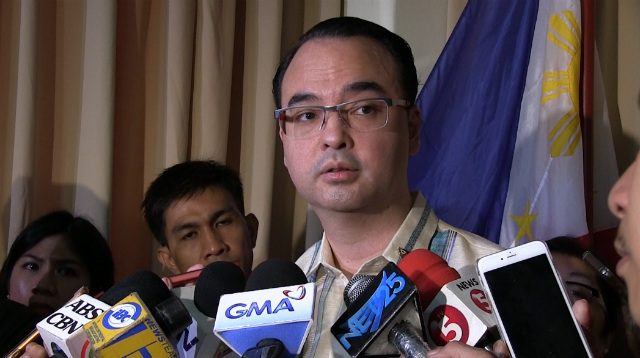 Cayetano, however, refused to disclose the facts about the Chinese ships reportedly guarding Sandy Cay, a sandbar near Pag-asa Island (Thitu Island) in the disputed waters.

“We cannot go into all the facts or some of the facts, at times, because it will harm our job. My job is to protect the Philippine claim and the Philippine public,” Cayetano said in an interview with reporters on Tuesday, August 22.

The Philippines’ top diplomat did not want to answer questions as basic as how many Chinese ships were there, what the ships were doing, and how long they stayed near Sandy Cay.

Cayetano said: “We will tell you that we are taking the diplomatic actions, but if we tell you every step of the way, and all the facts, et cetera, it will not help, unless there is something that happens that the public has to know or that will not affect the negotiations.”

Cayetano made these remarks after SC Senior Associate Justice Antonio Carpio described Chinese presence near Sandy Cay as “an invasion of Philippine territory.”

Carpio said this after revelations made by both Magdalo Representative Gary Alejano and the Washington-based Center for Strategic and International Studies about the Chinese ships near Pag-asa Island.

Carpio then challenged President Rodrigo Duterte and Cayetano to “vigorously protest” this – even as Cayetano said it is no longer the Philippines’ strategy to file diplomatic protests against China.

According to Cayetano, “the problem with some of the press statements that came out” was that these statements “had the wrong facts” about the issue. “So wrong premise, wrong conclusion.”

One of these wrong conclusions, he said, is that there is an invasion of the sandbars near Pag-asa Island.

Cayetano said: “Paano magkakaroon ng invasion kung wala namang umagaw o tatayo sa sandbar na ‘yun?” (How can there be an invasion if there was no one who stole or built structures on that sandbar?)