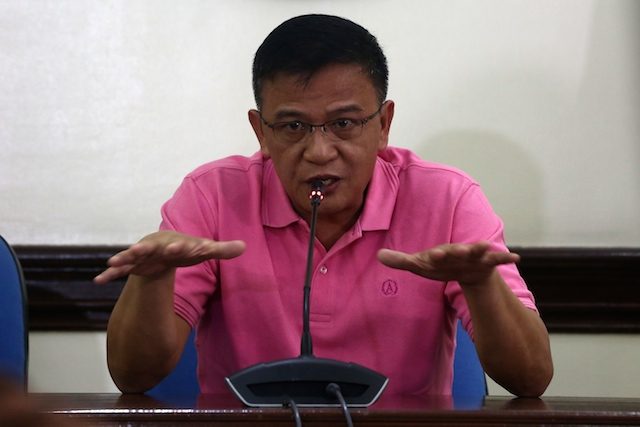 In a privilege speech outlining the extent of corruption in the BOC, Lacson also named the alleged bribe givers at the agency and the bagmen or collectors who facilitated the so-called “tara” system or bribery that has long plagued the agency. (READ: FULL TEXT: ‘Kita kita sa Customs’)

Lacson said that instead of eliminating bribery in the BOC, Faeldon even allegedly tolerated and promoted corruption in the agency.

“Unfortunately, instead of going against the system, siya ang kinain ng sistema (he was swallowed by the system) thereby effectively tolerating and even promoting the impunity of corruption,” the senator said.

Lacson cited talk in the BOC about the P100-million “welcome” gift that Faeldon supposedly received upon his assumption as Customs chief.

“Loud whispers in the 4 corners of the Bureau of Customs compound tell of a P100-million ‘pasalubong’ (gift) to the newly-installed Commissioner, a quarter of which, or P25 million was retained as finder’s fee by his middleman named Joel Teves,” the senator said.

“As they say, ‘Corruption is like a ball of snow. Once it’s set a rolling it must increase.’ Once one accepts the pasalubong (gift), then the ball of corruption starts to snowball. At, ‘pag nasarapan na, hahanap-hanapin pa ang dagdag-kita (And once you like it, you will always look for the additional income),” he said.

Faeldon denied the allegation and maintained that he never accepted bribes during his watch in the BOC. President Rodrigo Duterte announced on Monday, August 21, that he had accepted Faeldon’s resignation.

Lacson said that when the issue of bribery at the BOC again made headlines because of the P6.4-billion shabu shipment smuggled from China, he began receiving information on the so-called “tara” list of the BOC. (READ: TIMELINE: How P6.4B worth of shabu was smuggled into PH from China)

“We carefully vetted and cross-matched each and every information to come up with an objectively filtered and detailed list of who and how much each office or official in the Bureau collects per container per day,” Lacson said.

The senator said it was “almost an easy job to come up with a very credible ‘tara’ list,” as the documents and lists of those receiving bribes “almost had the same names of the Customs officials and offices involved, bagmen, and operators.”

Lacson named the following as alleged bribe takers in the BOC:

He said the following district collectors/officers were also mentioned, based on the information he received:

Lacson also named over 40 private individuals whom he described as alleged bribe givers or “players” in the BOC:

The “identified collectors/bagmen,” said Lacson, are the following:

He also cited an “unimpeachable source” who informed him about one of the BOC officials in the list, whom the senator did not identify.

“For the period covering May 16 to June 28, 2017, Mr Customs Official’s total encashment amounted to P5,109,000,” Lacson said, indicating the amount of bribes an official can get over a period under the prevailing system.

Lacson said he hoped his privilege speech would be referred to the Senate blue ribbon committee, which is investigating the shabu shipment.

He also expressed hope that the incoming Customs chief, Isidro Lapeña, will not take the same path as Faeldon.

“Mr President, I have known the newly-appointed Customs Chief, General Sid Lapeña, as an honorable man. In fact, I can personally vouch for his integrity. With his appointment as the new Customs chief, I can only hope na hindi siya kakainin ng sistema tulad ng nauna sa kanya (that he would not be swallowed by the system like his predecessor),” Lacson said.

“His highest calling at the moment is to descend to the gates of hell and destroy the brazen corruption within the country’s most corrupt government agency,” the senator added.

Lacson said to succeed in the war on corruption at the BOC, Lapeña “needs to institutionalize genuine reforms” that would lead to “the abolition of the corruption system from top officials down to the last rank-and-file in Customs.”

The senator also called on the Duterte administration to execute its war on corruption with the same intensity as its war on drugs. – Rappler.com