This visit, Duterte’s 3rd to Marawi City, came after troops regained a key stronghold of the terrorists – one of the mosques inside the battle zone – allowing them to restrict the enemies to a smaller area.

Photos show the President wearing a bulletproof vest and a helmet, which he removed as he joined troops inside a building.

“I will be happy to die for my country. I need to be with you to show my solidarity,” the PCOO quoted Duterte as saying.

The President also inspected the devastation near the battle zone, visited a temporary patrol base, and “even tried a sniper rifle and fired twice towards the direction of the terrorists,” according to the PCOO. 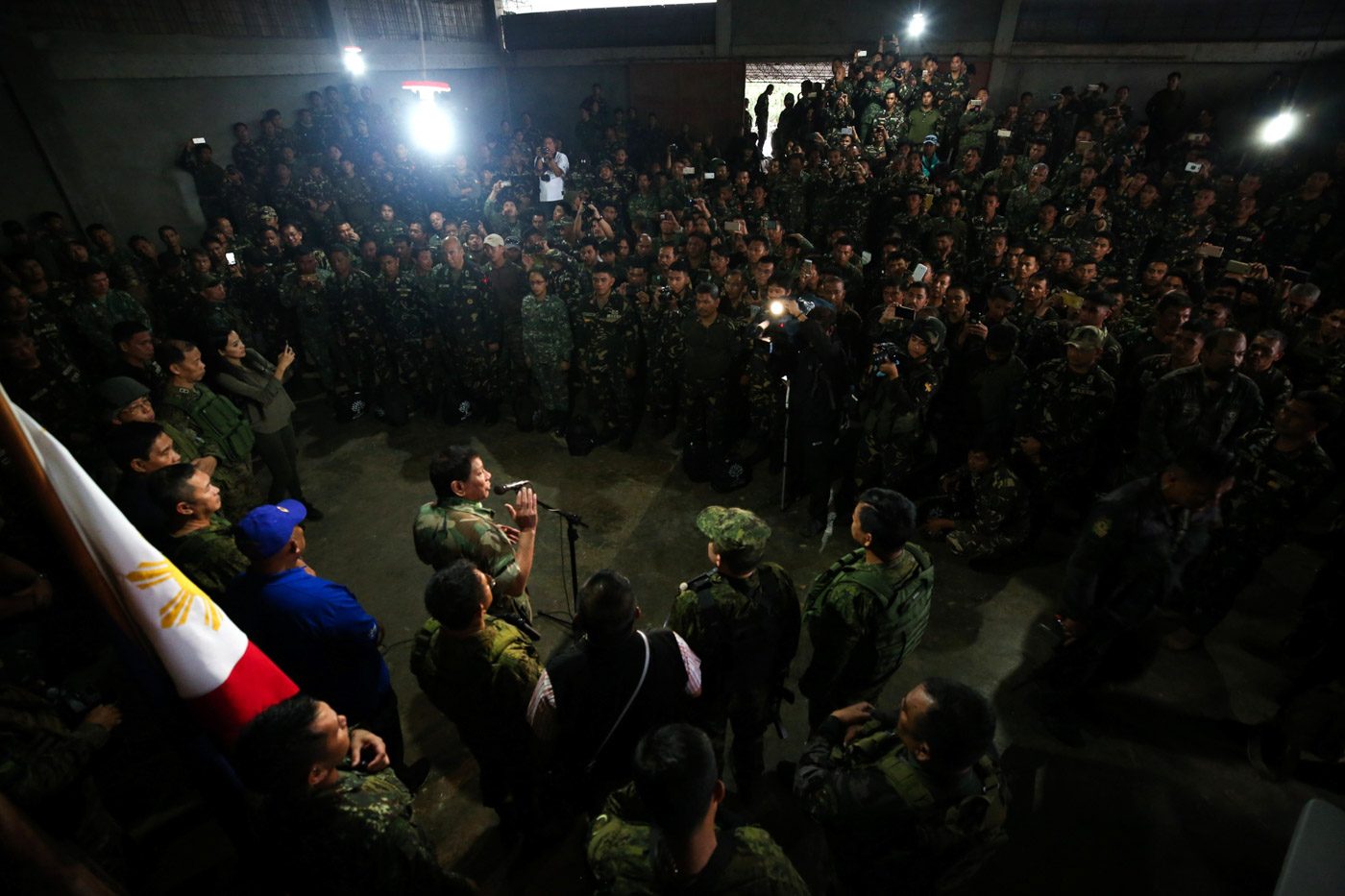 Duterte also reiterated that the battle would not end until all terrorists have been “neutralized” in Marawi City.

“I am not ready to talk peace at this time kasi marami na akong sundalong namatay pati pulis. We have to end it the way it should be, at ang earlier kong pronouncement, we will not stop until the last terrorist is neutralized, ‘yun ang sinabi ko and that will be the objective, the ultimate objective of the Armed Forces of the Philippines,” he said.

(I am not ready to talk peace at this time because I’ve lost many soldiers and policemen. We have to end it the way it should be, and as I said in my earlier pronouncement, we will not stop until the last terrorist is neutralized, that’s what I said and that will be the objective, the ultimate objective of the Armed Forces of the Philippines.)

The President’s first two visits to Marawi City also marked advances in the battlefield. Duterte’s first visit on July 20 marked successful operations to regain Mapandi Bridge. He only visited the brigade headquarters then.

The second visit on August 4 happened after troops were able to retake a hospital – the Safrullah M. Dipatuan (SMD) General Hospital or Safrullah Hospital – that also served as a stronghold for the terrorists.

Clashes erupted on May 23 after troops launched a raid against supposed ISIS emir Isnilon Hapilon who was spotted in a safehouse in Marawi City.

The military said the raid preempted a plan of the terrorists to attack the city on the first day of Ramadan, scheduled a few days later.

After 3 months of clashes, up to 600,000 residents of Lanao del Sur have been displaced. Residents of neighboring towns also evacuated.

The clashes have killed 129 government forces, 595 enemies, and 45 civilians, based on the latest military report.

The crisis in Marawi City prompted Duterte to declare martial law in the entire Mindanao. Martial law remains in effect there until December 31, after Congress approved its extension.