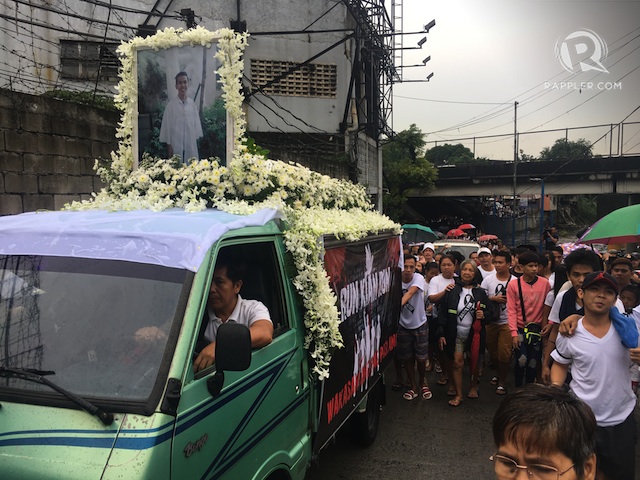 MANILA, Philippines – Over a week after the “one-time, big-time” police operation that killed him, 17-year-old Kian delos Santos was laid to rest on Saturday, August 26.

After a funeral mass at the Sta Quiteria Church in Caloocan City, Delos Santos’ remains were brought to the La Loma Cemetery. He was buried just before 2 pm.

During the mass, Delos Santos’ parents, Saldy and Lorenza, maintained that their son was not a drug courier as alleged by police. Police had also claimed that Saldy and his brother had drug links, which they denied.

“Kami ay simple lang, nagsusumikap, ngunit paparatangan ng mga ganoong bagay (We are simple people, hardworking, but then we are being accused of these things),” he said in his remarks during the mass.

He said he hoped that the cops who killed his son and other police “who killed innocent people” would go to church and “open their hearts.”

Various groups waited in the streets for the motorcade that headed to the cemetery to join the call for justice for Delos Santos. (IN PHOTOS: Funeral march for Kian delos Santos)

Prior to the mass, hundreds of people – family, friends, neighbors, and  supporters of Delos Santos – joined a funeral march from the Delos Santos home to the Sta Quiteria Church.

The procession stopped in front of Caloocan City Community Police Precinct 7, the base of the 3 policemen involved in the operation in Delos Santos’ community.

Father George Alfonso, Sta Quiteria Church parish priest, read “Panaghoy sa Katarungan (Cry for Justice)” in front the precinct, praying that Delos Santos and   other victims of the drug war would get justice.

Delos Santos has become the symbol of police abuse in the war on drugs, which had killed thousands since President Rodrigo Duterte launched the bloody campaign last year.

Delos Santos, was gunned down in a police operation in Caloocan City after he allegedly fought back – a common explanation given by authorities on deaths in the anti-drug campaign. CCTV footage, eyewitness accounts, and forensic reports indicate otherwise, fanning outrage that had compeled Duterte himself to temper his messaging on his key campaign.

During a Senate hearing on Delos Santos’ death, police admitted that they only found out that the teenager was linked to drugs after the operation, based on the statement of an arrested drug pusher, and through social media. (READ: Caloocan cops ‘confirmed’ Kian’s ‘drug ties’ after operation, through social media) – Rappler.com