Kian is your conscience 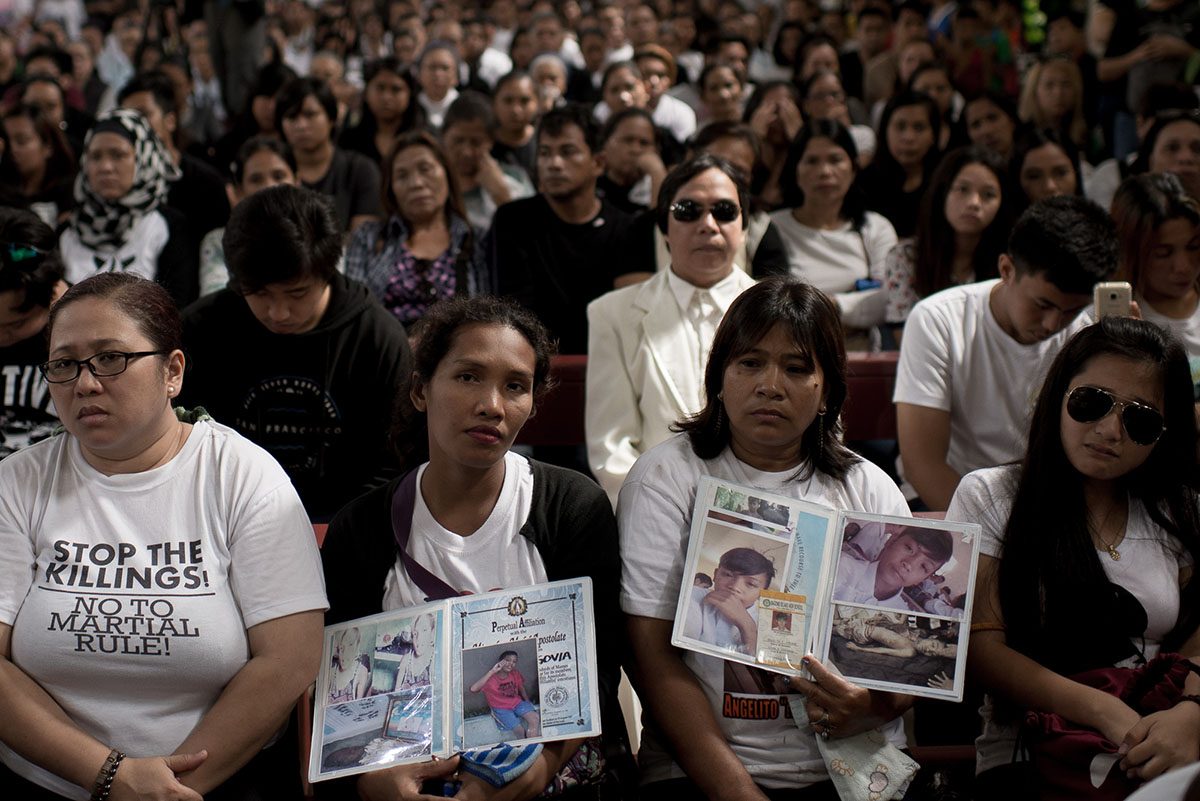 MANILA, Philippines – About 6 months ago, President Rodrigo Duterte asked policemen to urge drug suspects to fight when they are caught in a police encounter. “Kung walang baril, bigyan ng baril. (If without a gun, give him a gun.) Here’s a gun, fight,” the President said.

The policemen soldiered on upon their commander’s request. On the night of August 16, 2017, policemen shot 17-year-old Kian Loyd delos Santos after allegedly drawing a gun during a “one-time, big-time” operation in Barangay 160, Baesa, Caloocan.

Except Kian did not own a gun.

Kian did not even know how to hold a gun. Kian was wearing a T-shirt and boxer shorts that night he was killed – clothes far too impossible to draw a .45-caliber pistol from.

Policemen further said they found packets of shabu in the crime scene – a dead end alley beside a pigpen. They said he was killed – shot thrice to the head – because he exposed them to “imminent danger.”

Kian is dead and the blood is in your hands, said 2,000 marching protesters in the morning Kian was laid to rest.

With tears and cheers

A portrait of young Kian in a graduation toga sat in the middle of the green truck where his casket rested surrounded by white daisies and sampaguita.

The people of Baesa filled the sidewalks as the truck slowly crawled through its lanes. Residents lined up with their phone cameras out to take a photo of the boy’s cortege. When a camera faced their way, the mob went ecstatic and shouted Kian’s name. Jutice for Kian, justice for all!

Behind Kian, 2,000 friends, family members, neighbors, and strangers clad in white T-shirts walked the 7-kilometer procession. From a distance, it almost looked like one of boxing champion and Senator Manny Pacquiao’s homecomings as the huge crowd blocked the roads.

TV crews and reporters flocked to get their shots – attention never seen before in other drug-related deaths. Unlike other funerals, the mourners were not filled with tears and sorrow.

With Kian’s, the mob was angry but filled with hope. As the cortege reached Balintawak EDSA, only two lanes were left for motorists to use. One by one, vehicles started blowing their horns and for a moment the crowd thought it was because they blocked the highway until passengers pulled their windows down to chant with them as well.

“Running priest” Father Robert Reyes, Father Flavie Villanueva, and Father George Alfonso of Caloocan walked in the frontline. Behind them, nuns linked their arms and millennials held up streamers voicing the sentiments of many Filipinos: stop the killings.

One of the most striking placards was one that said “We hate addicts, we hate drugs, but we respect life.” Even a policeman in Police Station 7, where Kian’s alleged killers were assigned, shared the same sentiment.

In the short and peaceful rally held across the police station, PO1 Orlando Vasquez III said the morale of his comrades and his as well dipped after their colleagues were involved in the controversial case. “As a human, we value life sacredly,” he said. “And with the governing law, if you know you are on the right side, you will be right.” In the burial mass, Caloocan Bishop Pablo “Ambo” David said it is not natural for a parent to bury a child.

David said it is difficult to console with parents who have lost a child for only orphaned parents like them could truly understand their heartaches. “Even I would not know how,” he said.

But the Bishop reassured Kian’s parents, Saldy and Lorenza, that they are not alone. Parents like them are everywhere, especially in these times of bloody war, he said. “Kian is not the first victim. You are not the only parents who have lost a son in this cruel drug war.”

“They are behind you, beside you, around you, in this church and they are here to sympathize with you.”

There are more than a dozen of them in the diocese of Caloocan alone, the Bishop said. Many of them, minors like Kian.

One by one, Bishop David announced their names.

The most gruesome of all happened to a family who were former neighbors of the Delos Santos family, the Bishop said. On December 28, 2016, hooded men searched the house of the Santor family in Bagong Silang, Caloocan for drug suspect Jay-R Santor. Failing to see their target, the armed men sprayed bullets, and within minutes killed 8 people, 3 of them minors, and one of them pregnant.

The Bishop also recalled the story of Raymart Siapo, the 19-year-old handicapped victim of an unexplained killing on March 29, 2017.

The name of Raymart’s mother is a “symbol of the Philippines,” the Bishop said: Luzviminda.

“Kian is the thorn that has pricked the sleeping conscience of many.” – Rappler.com