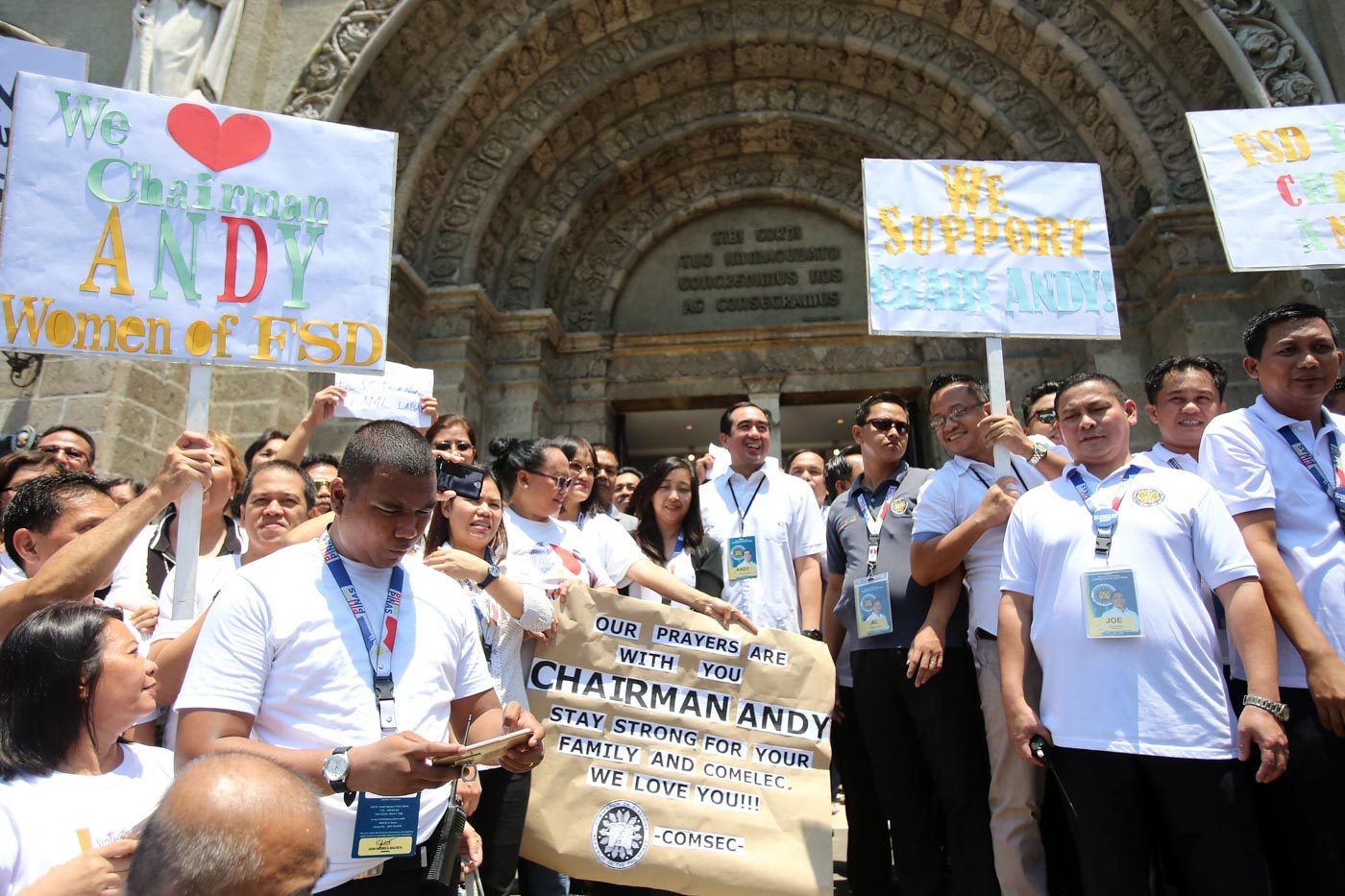 MANILA, Philippines – Commission on Elections (Comelec) Chairman Andres Bautista remained confident on Tuesday, August 29, days after lawmakers endorsed an impeachment complaint against him at the House of Representatives.

“Mukha namang kakayanin,” Bautista told reporters on Tuesday. (It seems like I can handle this.)

Bautista said he can explain the allegations against him in the impeachment complaint, which he has already read.

Asked if this means he will not resign, Bautista smiled and did not reply.

The Comelec chairman made these remarks 5 days after the impeachment complaint against him was transmitted to the office of House Speaker Pantaleon Alvarez on August 24.

The impeachment complaint revolves around Bautista’s alleged lack of truthfulness in his statement of assets, liabilities, and net worth (SALN), and his supposed failures linked to the Comelec hacking incident in 2016.

In his interview with reporters on Tuesday, Bautista also addressed the joint statement by all 6 Comelec commissioners urging him to take a leave or resign.

It was the first en banc meeting of the Comelec since the commissioners issued the statement on August 24.

Bautista said he discussed the matter with Comelec Commissioner Arthur Lim, and questioned the way they issued the statement through the press. “Pero tapos na ‘yon, so move on na tayo do’n,” he said. (But that’s over, so let’s move on from that.)

On Tuesday, he also sent flowers for his most vocal critic in Comelec – Commissioner Rowena Amelia Guanzon, who was celebrating her birthday.

“I think she is 60 so hopefully she will grow wiser in years,” Bautista said.

Comelec Commissioner Christian Lim on Tuesday also denied that there is infighting in the poll body. “We fight on issues,” he said.

“We’re preparing for elections, and that is what people needs to know,” Comelec Commissioner Luie Guia said. “Elections will be good and well prepared.”

Earlier on Tuesday, Presidential Spokesman Ernesto Abella called on all Comelec commissioners to resolve their differences, as Malacañang “cannot but be concerned that Comelec work is being affected.” – Rappler.com