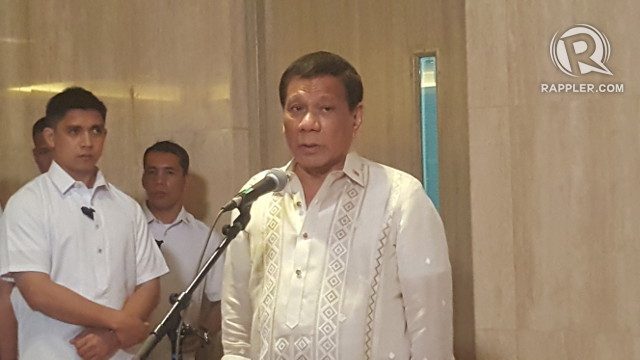 MANILA, Philippines – President Rodrigo Duterte backed up his chief of police Ronald dela Rosa in contesting remarks by Senator Risa Hontiveros that the deaths of teens Kian dela Rosa and Carl Angelo Arnaiz prove his government has a “policy” of killing drug suspects.

He called this thinking “stupid” and an “insult” to government.

“Do you think two killings, even if it’s illegal, makes a policy? Dalawang patay, palagay lang natin pinatay, murder (Two dead, let’s say they were murders). I ask Hontiveros, is that already the policy, is that the baseline of the policy? Napakabobo naman niyan (That’s so stupid),” said Duterte on Tuesday, September 5, during a media interview.

He echoed the sentiment of Dela Rosa who cried during the Senate hearing earlier that day, after Hontiveros made those remarks. (READ: Dela Rosa cries anew in Senate hearing, insists ‘no policy to kill’)

“You ask two killings, and you say that’s a policy? That’s a silly question. Why can’t you just say, ‘What is the policy of the police when confronting [a suspect]?’” continued Duterte.

He then accused Hontiveros and the Liberal Party of politicizing the death of Kian delos Santos.

“Ang problema sa inyo, ‘yung pinapakialaman niyo, ‘yung patayan, ‘yung magamit ninyo sa politika (Your problem is, you interfere in killings that you can use for politics),” he said.

He claimed that his political foes tried hard to “parade” the remains of Delos Santos on EDSA, a major thoroughfare in Metro Manila.

Like his online defenders, the President called out his critics for condemning Delos Santos’ death but staying silent when drug addicts committed heinous crimes against innocents.

“Why, the 5 who were killed in Bulacan, including a one-year-old. I do not hear them crying or even complaining that the police are not doing enough,” said Duterte.

Critics, including human rights advocates, accuse the Duterte administration of extrajudicial killings, not just of two Caloocan teenagers, but of thousands.

There over 3,200 victims in cases of “deaths under investigation,” according to Philippine National Police data.

Duterte has been accused of encouraging police to kill drug suspects, in some cases, even telling them to give suspects a gun to make it appear they resisted arrest. The President has even promised to grant police personnel pardon if they are accused of abusing their authority while conducting anti-drug operations. (READ: TRANSCRIPT: ‘Pag walang baril, bigyan mo ng baril’)

Since Delos Santos’ death, however, Duterte has toned down his kill threats and reminded police that they will go to jail if they don’t follow proper procedure during operations. – Rappler.com