Can P16 a day save PH kids from malnutrition? 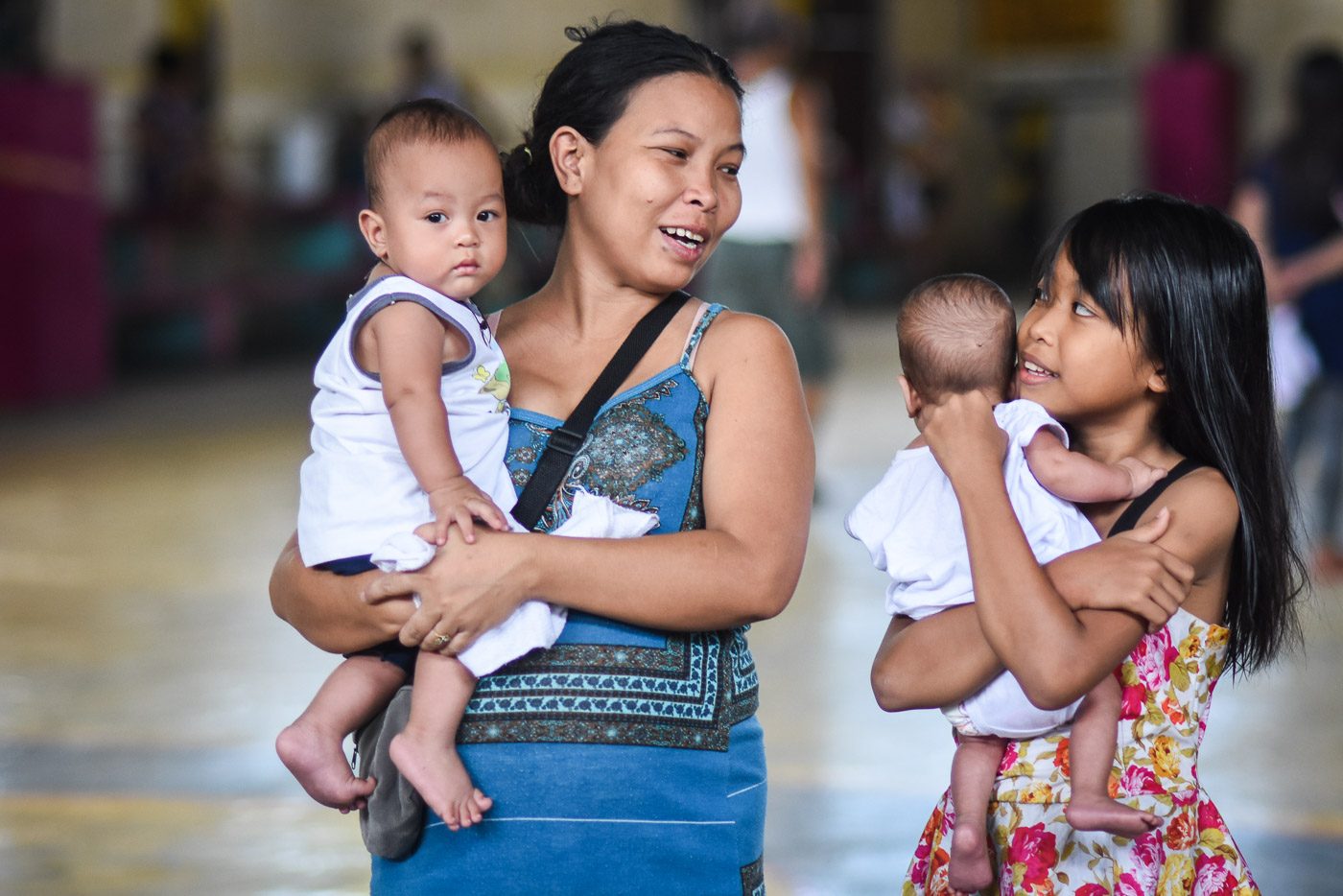 MANILA, Philippines – Poor nutrition continues to be a silent crisis in the Philippines.

Every one in 3 children under age 5 suffer from stunting, a condition of impaired growth due to malnutrition, said a study by the international organization Action Against Hunger released last year. Save the Children, meanwhile, estimated that there are around 95 child deaths every day linked to malnutrition.

But as the country continues to battle hunger and malnutrition, budget for the Department of Social Welfare and Development’s (DSWD) supplementary feeding program (SFP) drops by P1 billion.

Based on the agency’s proposed budget for 2018, allocation for the SFP will be P3.4 billion compared to this year’s P4.4 billion. Over 1.7 million kids will benefit from the program next year. This amounts to a spending of P16 per grantee per day for 120 days.

The allocation is lower from the P18 a day funding in 2017. There would also be 252,290 less beneficiaries in 2018. The SFP targets children aged two to 5 years old in daycare centers, where each child gets a hot meal twice in a day.

Lawmakers found during the House hearing on the DSWD’s budget that the cut was due to low budget utilization. In 2016, the agency was only able to spend P3.7 billion of the P4.4 billion budget.

However, what was lost in the DSWD’s budget seemed to have been allocated to the Department of Education’s (DepEd) School-Based Feeding Program (SBFP). This is intended for Kinder to Grade 6 students who are classified to be either wasted or severely wasted. 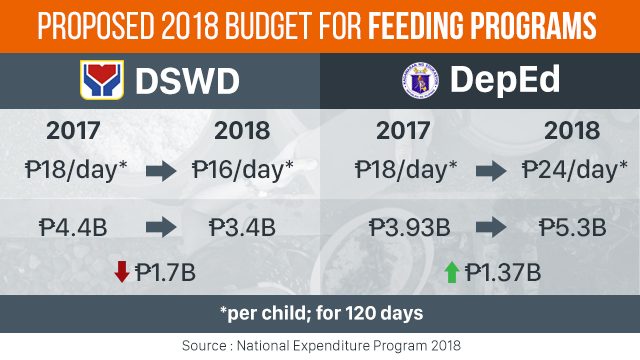 Would pouring more funds to school-age children better combat the lack of nutrition?

Senator President Pro-Tempore Ralph Recto earlier raised that the combined allocation of the two agencies actually shows that there is a P400 million increase in the overall efforts against malnutrition.

However, he pointed out that the DSWD’s program is equally crucial as the DepEd’s. Recto said that the SFP is a key component of the First 1,000 Days Initiative. (READ: Malnutrition, Peter Pan and never growing up) The advocacy, launched by Unicef in 2015, highlights the importance of proper child and maternal health and nutrition interventions in the first 1000 days from pregnancy to early childhood. (READ: PH among the worst places for children to grow up – report)

According to the World Health Organization, stunting results from the insufficient nutrition a child receives in the first 1,000 days of life. Stunting is an irreversible condition that has long-term effects on children.

“[These include] diminished cognitive and physical development, reduced productive capacity and poor health, and an increased risk of degenerative diseases such as diabetes,” said the WHO in a policy brief about its global nutrition targets for 2025.

Meanwhile, a study by the Philippine Institute for Development Studies (PIDS) found that the severity of malnutrition cases among school children is a factor why the DepEd missed its SBFP targets. Only 62% of the beneficiaries attained normal nutrition status – short of its 70% target.

The PIDS review, which covered the school year 2013-2014, also noted that older severely wasted students are less likely to improve their status compared to their younger counterparts. This highlights the crucial treatment of malnutrition at earlier stages of development.

The Philippines is one of the 168 countries that committed to achieving the Sustainable Development Goals by 2030. Goal number two of the 17-point agenda is achieving zero hunger, which includes the reduction of stunting and wastage among children.

Under these targets, the government should be able to reduce stunting by 40% and minimize childhood wasting to less than 5%.

Save the Children earlier said that the country is losing at least P328 billion each year because of stunting. (READ: Why you should care about stunting)

The report, released in 2016, said that some P166.5 billion is lost income due to low educational achievement while P160 billion is lost productivity due to premature deaths. In terms of the cost to education, the country loses P1.23 billion annually.

Experts also say the Philippines is bound to lose the “rare” window for economic growth driven by the young population called the “demographic dividend”. Given the young population, the youth is seen as the major social and economic force in the next 45 years. (READ: UN agency: Harnessing young girls’ potential key for PH)

To maximize this potential, a study by the UP School of Statistics for the United Nations Population Fund and the National Economic Development Authority suggested that the young population must be well-educated and employed. Such an opportunity that might be missed by the 3 million kids suffering from stunting. – Rappler.com